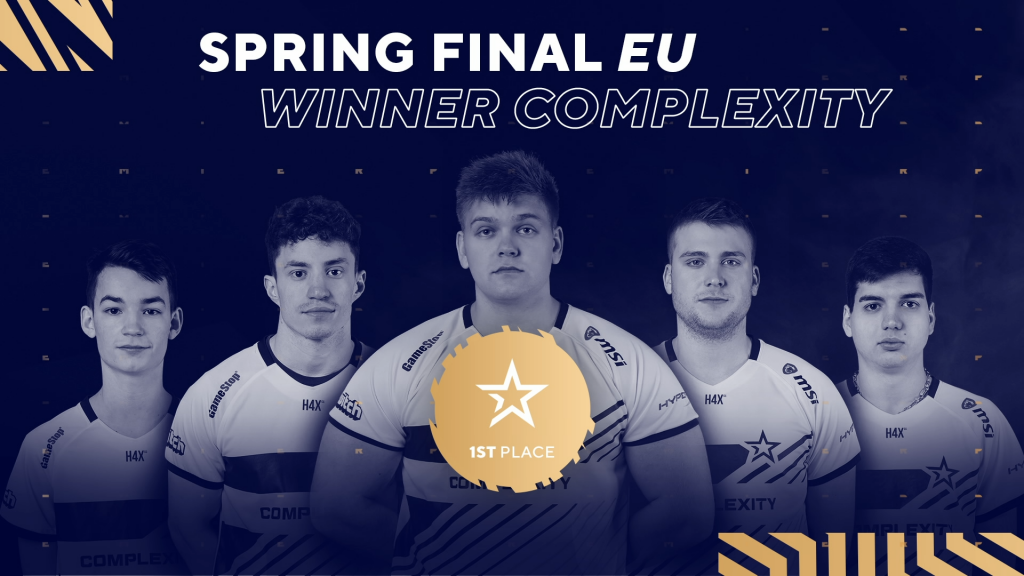 The BLAST Premier Spring Season has come to a close. In a surprise turn of events, Complexity has taken down top team after top team to secure their first big tournament win with their new “juggernaut” roster. Along with a whopping $335,000 first place prize, Complexity have also earned a spot at the BLAST Global Final in January of next year. Their road to the title was no walk in the park either.

In their first-round matchup, Complexity went up against OG. This match featured the two lowest ranked teams at the event, so no one paid too much attention. The teams ended up trading maps, Complexity stealing Train while OG took Mirage. The Mirage result was especially important, considering how the map would pan out for the rest of BLAST.

Nuke was the tiebreaker map which saw Complexity start on T side. They earned 10 rounds, solidifying a good attacking game plan on the hardest map to push in competitive rotation. Their CT side was good enough to close out the game 16-12, advancing to the next round. In-game leader Benjamin “blameF” Bremer quietly played a fantastic match with a 66-37 K-D ratio and 91.5 ADR over the three maps.

The close result solidified the thought that no matter who won this match, they would just end up falling to Na’Vi right after. The CIS giants took down a strong Ninjas in Pyjamas squad in a decisive 2-0 and were ready to make a run for the title. After rolling Complexity 16-5 on their own Nuke pick, their victory was all but confirmed. However, Complexity had more up their sleeve than anyone had imagined.

Complexity’s stonewall defense with Valentin “poison” Vasilev’s scoped weapons at the helm stalled Na’Vi completely. They only allowed one T side round, taking the second map 16-8. Na’Vi had the choice of either Mirage or Inferno for the decider map. Seeing their opponent’s loss to OG the match prior, they chose Mirage. Na’Vi would regret this decision very quickly.

In a showing of complete dominance, Complexity once again crushed Na’Vi’s T side for 12 rounds in the first half before closing the map out with a clean attack. Just like that, Na’Vi had been knocked to the Losers’ Bracket after a shocking 16-3 loss.

In the Winners’ Finals, Complexity found themselves fighting FaZe Clan. FaZe were coming off of sweeping Vitality on Nuke and Dust2, so when the maps for this match were identical, confidence in Complexity wavered. Those worried turned out to be unfounded once the match began.

Having recovered from their loss to Na’Vi on the map, Complexity put up a stellar T side on Nuke. A 9-6 half put them in the drivers’ seat going into the defense. FaZe got off to a very strong start, cutting the score to 11-12. That was until Complexity made their stand. At the center was Owen “oBo” Schlatter who eventually earned match MVP with a 1.25 HLTV rating.

Complexity won every round after that, solidifying a 16-11 win on Nuke.

Dust2 would be a very close affair. Complexity once again opened it up with a 9-6 T side, but that was a much more reasonable score line on this map. FaZe Clan could easily pull off an identical half to force overtime, so every round counted. Once again, oBo stood tall to get Complexity to match point early.

That round ended up being the difference, as Complexity narrowly completed the 16-14 victory to send them to Grand Finals.

While Complexity’s road to Grand Finals was just three won matches, Vitality took down G2 Esports before falling to FaZe in round two. They had a long Losers’ Bracket journey ahead of them if they wanted to take the trophy. It started out with a clean 2-0 against NiP, earning the French squad a date with Na’Vi in Losers’ Semis.

Vitality’s map pick was Inferno. It started off great, with them taking 10 rounds from T side. Normally, that lead would be enough to at least look like you had a winning chance. However, Na’Vi pulled together a complete annihilation of Vitality’s defense. Despite Aleksandr “s1mple” Kostyliev being at the bottom of the scoreboard, the rest of Na’Vi stepped up to perform a flawless 11-0 T side. The 16-10 result put Vitality at threat of elimination.

Instead, Na’Vi’s surprise Overpass pick went very poorly for them. Vitality broke their CT side slump and took a 12-3 lead due to multiple clutch rounds swing rounds.

This time, Vitality closed out their lead after a 4-3 T side. The 16-6 win forced a tiebreaker on Nuke. Vitality got to start on CT side and made good use of the advantage. Their game plan had heavy focus on Dan “apEX” Madesclaire’s AUG play which was present early on.

Vitality ended up going 12-3 yet again. Their confidence helped them close out this map as well, although it took a bit longer. ApEX earned match MVP with a 64-44 K-D ratio and 96.5 ADR, sending Vitality to a rematch against FaZe Clan.

The maps would once again be Nuke and Dust2, but the result would be much different. Starting on Nuke, Nikola “NiKo” Kovac and apEX fought for the title of top fragger. Both teams earned 8-7 CT halves, bringing the map to overtime. Once there, it was Vitality who had all the answers. They quickly earned a 4-0 streak to win map one 19-15.

Now on Dust2, FaZe had their backs against the wall. Despite the best efforts of stars NiKo and Marcelo “coldzera” David, Vitality’s complete team play gave them a slight edge. Their 10-5 defense was followed by an extremely close second half. It was Cedric “RpK” Guipouy who had the honor of securing the 16-14 win to send Vitality to Grand Finals.

In what became the most one-sided map of all of BLAST Spring, Vitality wiped the floor with an unfamiliar Complexity. A 16-2 result saw the higher seed take a 0-1 deficit early in Grand Finals.

This is where Complexity truly showed their resilience. Their map pick was Mirage. Although they got off to a hot 9-6 start on T side, Vitality had similar success. Fast forward to a 14-14 tie, Vitality made a break for the B bomb site. Despite Willian “RUSH” Wierzba finding three kills, Vitality won the 2v3 to take championship point.

In the final round of regulation, Complexity read Vitality’s repeat hit and this time supported RUSH properly. Overtime would be needed to decide a winner. Complexity effectively held Vitality at the gate before pulling off a perfect attack half to earn the 19-16 victory. One final map would be played at BLAST Spring.

The staple map of the event, Nuke, would be the final battleground. At first, things looked rough for Complexity. Starting on the T side, they struggled to find consistent points of attack. Vitality earned an 8-3 lead off of their usual play. However, Complexity eventually found their way through the tunnel, starting with a poizon clutch.

A four-round streak at the end of their attacking half gave them an 7-8 score and momentum going forward.

Despite losing a second pistol round, the Complexity force buy kept the score close. Both teams jockeyed for position, resulting in a 12-10 lead for Vitality. At this point, Complexity truly showed their progress as a squad. With blameF at the helm, Complexity put together a flawless final six rounds. No strategy that Vitality used found any success. BlameF’s 28-16 K-D and 101.6 ADR as well as oBo’s heroics defending the lower bomb site helped Complexity secure the 16-12 victory.

With Complexity’s win at BLAST Spring and BIG’s recent win at DreamHack Masters, CS:GO has certainly been chaotic in the past couple of months. Complexity have been grinding the game more than anyone ever since their roster came together late last year. The fact that they have risen atop the chaos shows their dedication to improvement. Hopefully they can keep up the pace and truly become the juggernaut they were meant to be.