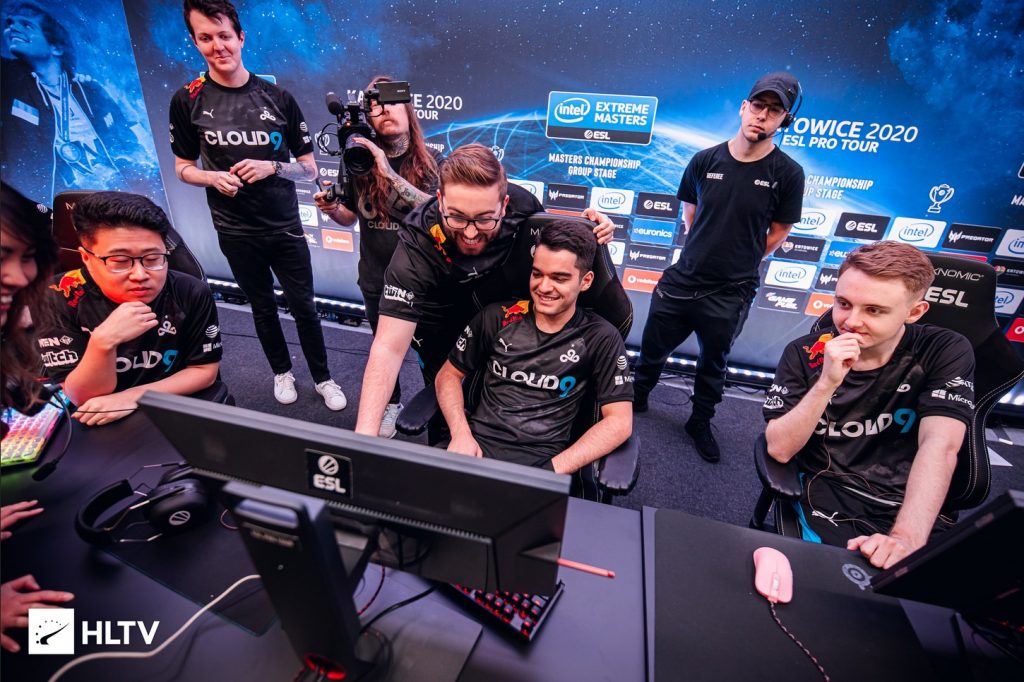 Cloud9 have made a clean run through their bracket to qualify for Stage 2 at CS_Summit 6. (Photo courtesy HLTV)

The second Counter-Strike RMR event leading up to the Rio Major in November has gotten under way. This time, Beyond the Summit has organized cs_summit events in both Europe and North America.

On the NA side, the final three teams who will be playing for precious points have been decided. Cloud9 and Chaos Esports Club took the fast route, getting two consecutive wins to qualify. Meanwhile MiBR had to crawl through the lower bracket for the final spot.

Cloud9 had a very short trip through their stage one bracket. Although their matches all ended in 2-0 sweeps, they had a couple of very close calls. Their first match was against the New England Whalers. On the Whalers’ Nuke pick, Cloud9 actually had a mediocre CT side. They gave up seven rounds, but then quickly turned the tables on the attack. A five round streak off of the pistol put them in an easy position to close it out. The result was a 16-10 win for Cloud9.

Train however, was anything but easy. After putting up a great 9-6 T side, they allowed the Whalers to do the same. Although train is normally a very CT sided map, some players on C9 were struggling to have an impact. Josh “oSee” Ohm shouldered most of the burden. This map went to a total of three overtimes as neither team could quite find the edge they needed. In the end, oSee’s massive 57-28 K-D ratio and 111.8 ADR netted C9 the 25-22 victory.

Cloud9’s advancement match featured an almost identical storyline. Yeah Gaming’s Inferno pick didn’t go as planned, allowing C9 to take a relatively safe 16-11 win. Once again on Train, the match stretched on and on. Four overtimes would be required to decide a victor after two mirrored 8-7 halves. OSee’s AWP was again the focal point for C9’s game plan as he was their only player with a positive KD ratio by the end. On the final round of OT4, C9 finally made their stand to secure a grueling 28-26 result and advance to the Group Stage.

One of the more interesting storylines of stage one was Chaos’s win in their side of the bracket. For their first match, they had to take on the highest ranked team at the qualifiers in MiBR. Both teams had very decisive map picks, allowing them to easily earn a map in the series. After a Chaos 16-6 on Overpass and an MiBR 16-8 on Dust2, it was time for Inferno.

At first, Chaos looked like they were running away with the match. They earned an 11-4 T side half, stunning the Brazilian squad. However, MiBR were a resilient team as always. They started their own T side with a seven round streak to start their comeback strong. Although they dropped four rounds in a row to give Chaos match point, the comeback wouldn’t stop there. MiBR cleaned up the final four rounds to earn another shot in overtime.

Unfortunately for them, the reset would fall in Chaos’s favor. A 19-17 final score put Chaos through to the advancement round while MiBR would have to climb the lower bracket.

Chaos’s last match would be against another Brazilian squad in TeamOne. Their own Mirage pick was a bit bumpy at the start, but a large CT side win streak at the beginning of the second half was the edge they needed to take their map. TeamOne then showed their prowess on their own map of Train. A 9-6 T side led into a very strong defense which helped them tie the series up with a 16-8.

Luckily for Chaos, the decider map was Overpass, a map that they had just stomped MiBR on. Although TeamOne put up more of a fight, the outcome was never in doubt. After Chaos’s five round streak to start the second half, they had a 14-6 lead. Chaos would win 16-12 with three players at a +7 K-D difference.

With three best-of-three series standing in their way, MiBR had a lot of work to do if they wanted the final spot in Group Stage. They did a good job making the burden as light as possible at first. After a very clean 2-0 over Team Envy where they only gave up a total of eight rounds, it was on to face Yeah Gaming. Their fellow countrymen also couldn’t put up much of a fight. With a 16-10 on Inferno and 16-12 on Train, MiBR had just one more match in their way.

Their final opponent would be Triumph, who had put together a flawless 4-0 on their road through losers’ as well. This time, both teams would be in for an extended brawl. Triumph’s Overpass pick began normally enough. Both teams had very strong CT sides, but struggled to put together good attacks. After mirrored 10-5 halves, it was time for overtime. As if stage one hadn’t had enough OTs with Cloud9, this map would go on for five. In what turned into 59 total rounds of Counter-Strike featuring big play after big play, MiBR would come away with the 31-28 victory.

Now on MiBR’s Dust2, they had a chance to clean up the match and advance to the next round. Instead, Triumph laid the smack down on them. A dominant 16-6 result for Chaos brought the series to a third map. Once again, MiBR’s sheer tenacity would be the difference maker. Mirage was very close throughout the entire map, the round difference never climbing above four. Fernando “fer” Alvarenga would step up for the Brazilians with a 30-19 K-D ratio and 95.2 ADR. Triumph got so close, but just couldn’t make it to the finish line.

MiBR would take the 16-13 victory and the 2-1 match victory. At the same time on Triumph, Michael “Grim” Wince put together s1mple levels of hard carry. Throughout the series, he earned a ludicrous 123-50 K-D ratio and kept up 109.2 ADR. Although he did slow down on Mirage, that level of play puts Grim in a class of his own.

With the final three teams solidified, CS_Summit 6 will truly begin. Eight of the top teams in North America will be split into two groups and will play a double elimination bracket. The two top teams from each group will go into one final four team bracket. Matches start on June 24th at 3:00 P.M. EST.