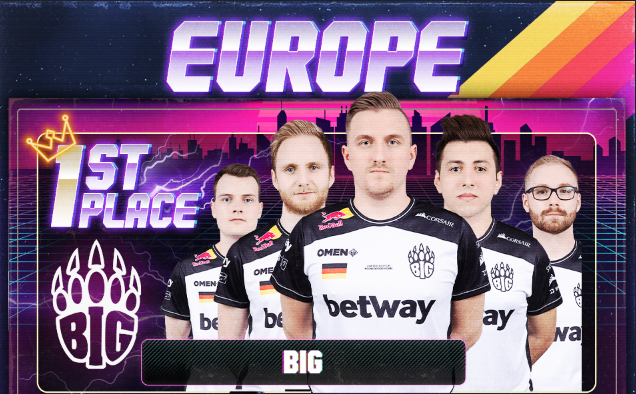 BIG have secured first place at cs_summit 6 and a solid start to their Rio Major qualification campaign. (Photo courtesy Beyond the Summit)

Europe’s second RMR Event for the Rio Major, cs_summit 6, has come to a close. In the final showdown between BIG and Team Vitality, BIG overcame a one map default deficit to take the series 3-2 and earn the full 2000 RMR points.

Vitality took first seed in their group, while BIG lost out to OG in the Winners’ match to take second in theirs. Both teams came into the playoffs as potential favorites to make it through their side of the bracket. They would each fulfill their end of the bargain.

Vitality went through Heroic and OG on their journey. Mathieu “ZywOo” Herbaut kicked the playoffs off with a bang, getting an ace with a knife kill against Heroic.

The French squad looked indomitable on T side, securing a 13-2 score at the half. They closed out their map pick 16-5 to take the lead in the series. Although Heroic stood tall on their own Mirage pick with a 16-10 win, it came more from Vitality’s lack of preparation on the map. When the teams traveled to Inferno for the decider map, Vitality pulled together another 16-5 victory to clean up the series. ZywOo and Richard “shox” Papillon each got 60 kills over the three maps.

Vitality made some adjustments against OG. This time, they were ready for the Mirage pick and took the map fairly convincingly. An average 9-6 CT half led into a strong attack from Vitality. OG only found three rounds on defense as Vitality stole their map 16-9. They then experimented with an Overpass pick. Vitality didn’t look too clean on the map yet, resulting in a tied score at the end of regulation. It took a whopping four overtimes to decide a winner, but ZywOo and Vitality pulled through. A 28-26 finish sent Vitality through to Winners’ Finals.

Whereas Vitality ran into a couple of speed bumps, BIG had a very easy time in their first two matches. They demolished the Group A winners in GODSENT for their first match. A 16-9 and 16-8 result on Dust2 and Overpass saw every BIG player end with a positive K-D ratio and every GODSENT player a negative one.

Fnatic, but mostly Ludvig “Brollan” Brolin, put up a slightly better fight in Winners’ semifinals, but BIG was just too powerful as a squad. Despite Brollan’s gargantuan efforts on Overpass, his 38 kills could only get Fnatic to 13 rounds before BIG claimed the win on Fnatic’s pick.

Now on Nuke, BIG had to start out on T side. Ismailcan “XANTARES” Dörtkardeş made tons of room for his squad. He earned 16 kills on the attack and helped BIG take a 9-6 lead. They were then easily able to close out their map 16-10 to secure a Winners’ Finals spot.

The stage was set. Vitality and BIG would face off to decide who got a one map lead in the Grand Finals. BIG had noticed Vitality’s struggle against Heroic on Mirage, so they opted into it. With momentum on the line in the first half, Florian “syrsoN” Rische hit four AWP shots to deny Vitality’s retake.

BIG went into the locker room leading 8-7 from T side. That small lead was just enough to keep them ahead throughout the rest of the map. BIG took the 30th round to narrowly secure their own map 16-14.

On Inferno, it was the shox and ZywOo duo to steal the show. They earned a total of 51 kills and had equal impact on both the T and CT sides. After taking a 10-5 lead in the first half, Vitality kept BIG short of the sticks to tie the series up with a 16-13 finish.

The final map was Dust2. Seemingly short on ideas or energy, BIG had a hard time finding openings on the T side. Vitality read them time and time again, resulting in in-game leader Dan “apEX” Madesclaire putting on a show.

He finished with a 30-16 K-D ratio and 121.6 ADR, good for a 1.70 HLTV rating. BIG tried their hardest on defense, but just couldn’t close the gap. After a 16-12 result, Vitality had earned a Grand Finals berth with a guaranteed one map advantage.

With the loss hanging over them, BIG now had to claw back through Losers’ Finals if they wanted a chance at the title. Their opponents would be OG, the only team besides Vitality to beat BIG at cs_summit 6. This time however, things would be different from the Group Stage despite the maps being the same.

BIG decided to double down on Dust2, knowing they would need to beat Vitality on it later. BIG’s T side performance would have been much better if not for Nathan “NBK-“ Schmitt’s 17-7 K-D. Still, they held a small 8-7 lead at the half. BIG’s CT side was a different story. They were flawless on defense, not allowing a single OG player to step up or make plays. The perfect half ended in a 16-7 win for BIG.

It became clear that Inferno was just not a map BIG were comfortable on. They let OG take an 11-4 lead from T side, then failed to put up a reply. The entire BIG squad had a negative K-D ratio in the 16-9 loss. Finally, the series came down to Mirage. In their Group Stage meeting, OG narrowly came out on top with a 16-14 win. This time, it wasn’t even close.

After a rough 0-4 start, Johannes “tabseN” Wodarz and syrsoN pulled off a 2v4 to instantly shift the momentum. From there, BIG didn’t drop another round on CT side.

The 11 round win streak led into a near perfect T half from BIG. A 16-5 final score affirmed that BIG deserved their rematch against Vitality.

With the French squad starting at a one map lead, BIG got to choose the first map. Their tried and true Mirage was up first. Unsurprisingly, BIG were infinitely more prepared for it than Vitality was. After an average T side, BIG stonewalled Vitality’s attack just like they did to OG the day prior. With their lack of strategy, Vitality rolled over to give BIG a 16-8 victory.

Inferno was up next. BIG were 0-3 on Inferno up to this point at cs_summit 6. That record became 0-4 after Vitality comfortably stormed their defenses. Aside from XANTARES who earned 31 kills and 111.9 ADR, BIG had little to say as Vitality took a 16-11 win, putting them on championship point.

Next up was Dust2, a map that BIG knew they had to improve on. Despite the stats for the map looking very even if not Vitality favored, it was the overall team play game planning of BIG that was the difference maker. In their previous matchup, BIG only took five rounds on T side. They were able to double that production to 10. Even when their new plans went awry, it was BIG who were more clutch. With a broken economy, they won a B rush out of tunnels against a three-man stack to swing the half in their favor.

BIG stayed a step ahead in the second half and were able to win the map 16-10. One last map would be needed to decide the cs_summit 6 champion.

The final battleground would be Overpass, a map both teams were familiar with. The first half couldn’t have been closer. No team ever found more than a three-round lead. An 8-7 score in favor of Vitality’s T side put us no closer to deciding a victor. That was until BIG’s offense hit the stage. They started their T campaign with a seven round win streak. No matter what Vitality tried to do to take map control, BIG had an immediate hard-hitting response. The French squad ran out of gas in the end, leaving BIG to close it out. A 16-10 finish saw BIG take the cs_summit 6 Grand Finals win 3-2.

Despite winning the event, BIG are still a long way from securing their spot at the Rio Major. These 2000 RMR points are their only points earned so far, putting them at 8th place in the standings. They currently own one of the final two contender spots, but could easily rise to Legend or fall out entirely depending on how the Autumn RMR series goes.

As for Vitality, the 1875 points earned for second is enough to give them the first guaranteed Rio Major qualification. They currently sit at 3535 points, almost 1000 above the next highest team. They will be looking to guarantee their Legend status soon.