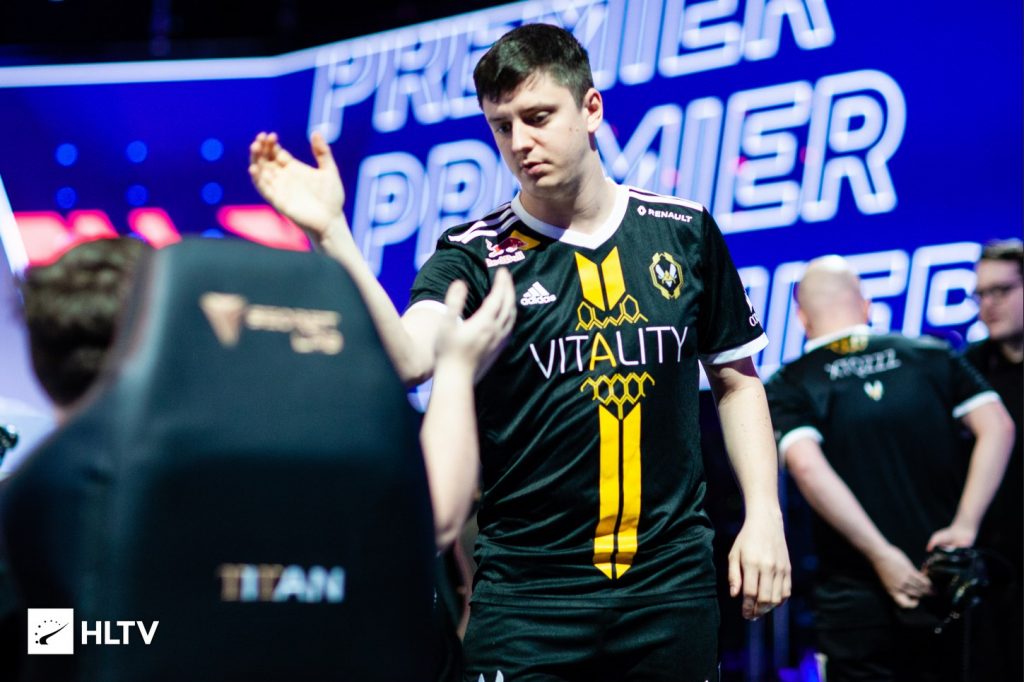 Vitality have utterly dominated their competition in Group B to earn first seed. (Photo courtesy HLTV)

The Group Stage of Europe’s cs_summit 6 has come to a close. Many notable teams have already dropped from the event, leaving room for more of the middle tier squads to rise up. Most surprisingly, G2 Esports and FaZe Clan, ranks one and three worldwide respectively, have met their ends at cs_summit 6. However, Vitality, GODSENT NiP, and OG have made it through in Europe’s division.

Group A was the most upside-down group by far. In a surprising turn of events, the lowest ranked team present in GODSENT earned a 2-0 record to take first seed. Their first match was against a struggling mousesports roster. Mousesports recently fell out of the top ten for the first time since November of last year, and that slip continued here.

On mousesports’ own Dust2 pick, they started off with a below par 6-9 T side. However, their defense was much more well prepared. After winning the first three rounds, GODSENT lost nine of the next ten rounds. Just when mousesports looked keen to take their own map, GODSENT found the final two rounds of regulation with A site hits.

In overtime, GODSENT eked out a narrow 19-17 win with a 2v3 B site retake thanks to Finn “karrigan” Andersen killing himself with a Molotov.

As if that wasn’t demoralizing enough, it was now time for GODSENT’s Vertigo pick. Their T side was very clean, allowing them to hit the A site over and over. The first half once again ended in a 9-6 lead for GODSENT. Mousesports did have something to say in the second half, keeping pace with GODSENT. Unfortunately, going round for round wouldn’t make up the deficit. GODSENT took the 16-13 win to secure the 2-0.

In the Winners’ match, GODSENT would face off against group favorites G2 Esports. Although many wrote this match off as an easy win for G2, GODSENT proved very early on that they were not to be trifled with.

They utterly dominated G2’s map pick of Train with a strong CT side performance. An 11-4 half turned into a very quick 16-6 finish for GODSENT. Nuke was a much closer affair, with G2 taking the 11-4 half time lead for themselves this time. However, GODSENT’s tenacity proved crucial as they put together a comeback to force overtime. With momentum on their side, GODSENT took the 19-16 victory to sweep G2 and earn first seed in Group A.

With only one spot left, G2 and Fnatic faced off in a winner take all match. The teams met in their first Group Stage match which resulted in a 2-0 sweep for G2. This time, it was Fnatic who were the better team on the day. Fnatic comfortably won their own Train pick 16-11 before moving onto G2’s Dust2. Once again, the Swedish squad was too much for G2 to handle. A 16-10 win for Fnatic earned them the last playoff spot while G2 have unceremoniously exited the event.

As the second ranked team worldwide, Team Vitality was always the favorites to win Group B. The rest of the field was very weak by comparison, with North being the next highest rated team at 29th. Vitality’s first match was against the recently qualified FATE Esports.

Interestingly, of the five teams who made it to cs_summit 6 through the closed qualifier, FATE was the only one who didn’t make it out of the Group Stage. It was easy to see why against Vitality. The French squad gave FATE the biggest beating in all of the groups. A 16-2 on Overpass led into a 16-3 on Nuke. A measly five rounds were all FATE could gather before slinking away to the Elimination match.

Vitality were in form and ready to take first seed against North. Replaying Overpass and Nuke, Vitality showed up in similar fashion yet again. Mathieu “ZywOo” Herbaut was on point as usual, earning a 44-23 K-D ratio and 100.3 ADR across the match.

North did at least put up the resistance you’d expect of a tier one team, but they were still just outclassed across the board. With 16-10 and 16-9 results, Vitality rightfully took first seed.

North would get their playoff spot after taking down Movistar Riders in the Decider Match. They won their own Vertigo pick in a close 16-14 game before stomping Movistar on Inferno 16-7. Group B went exactly as expected.

Group C was also a fairly straightforward group. The Ninjas in Pyjamas were the most likely to take first seed, but two of their competitors would not be pushovers. Even so, the first match against x6tence went very well. Much like Vitality’s destruction of FATE, NiP laid down a similar performance with a 16-4 on Train and a 16-6 on Vertigo.

The much-anticipated Winners’ Match would be against Heroic after they took down ENCE in a 2-1. The teams started off on Heroic’s Mirage. It was NiP who would get off to a hot start, dominating on the CT side. An 11-4 half for NiP put them in the driver’s seat going into their attack. Sure enough, the Ninjas would be able to secure a 16-13 win and steal Heroic’s map.

Now playing for the sweep on their own Vertigo pick, NiP had to start on the T side. They had a surprisingly hard time getting going. Heroic put up a very strong defense thanks to Nikolaj “niko” Kristensen’s 28-13 K-D and 126.3 ADR. His performance, good for a whopping 1.86 HLTV rating, carried Heroic to a 16-6 finish to tie up the series.

Dust2 would be the tiebreaker, and it was a banger of a game. The two squads threw everything they had at each other in order to take that top finish. An 8-7 half time lead for Heroic’s T side was soon extended to 11-7 after winning the second pistol round. From here, the stars of NiP came out in full force to bring the game back. Fredrik “REZ” Sterner and Simon “twist” Eliasson made big play after big play to keep NiP in contention. In round 26 with the score at 13-12, twist pulled off an AWP 1v3 to break Heroic’s economy and put NiP on the road to victory.

The Ninjas completed their five round streak to close out the map 16-12 and take first seed in Group C. Heroic’s efforts would be rewarded. In the Decider match against ENCE, Heroic earned two clean map wins on Nuke and Mirage 16-8 and 16-5 respectively to secure the final playoff spot.

The final group of cs_summit 6 was a very interesting one. OG and BIG had just recently qualified for the event and were both placed into the game group as FaZe Clan. First up for OG was Heretics. Even though they lost their own Nuke pick 16-11, OG threw Heretics for a loop on Inferno and Mirage. OG looked indomitable on those maps with two 16-3 wins to take the match victory.

On the other side of the bracket, BIG made easy work of FaZe Clan. Despite being such a respected team, FaZe failed to put up a respectable performance on both Mirage and Nuke. It would be BIG facing off against OG after their 16-10 and 16-12 wins.

This match would go the full distance. BIG chose Dust2 for their map, starting on the T side. They went a respectable 8-7 before swapping to the defense. At the end of an important economic battle, Ismailcan “XANTARES” Dörtkardeş shut OG down with a close-range Desert Eagle 4k. With that momentum, BIG went on to win map one 16-9.

OG’s Inferno went similarly well for them. After taking a 9-6 lead from T side, OG’s defense flourished. Their Banana control forced BIG into making unfavorable decisions, leading to a comfortable 16-11 finish for OG.

Finally, both teams played up to expectations on the Mirage tiebreaker. Despite being down 1-5 at the start, OG’s T side came roaring back to take an 8-7 lead at the half. OG continued that streak with a pistol round win which led to a 12-7 lead. However, BIG wasn’t finished quite yet. With no money left in the bang, BIG bet it all on an A site hit. It worked out, but OG still had loads of money saved up. BIG would take down OG’s gun rounds three times in a row to bring the score to 12 apiece.

Right as things looked to be getting out of hand, Aleksi “Aleksib” Virolainen brought OG back to Earth with a strong defense of the B site.

Thanks to that jolt of energy, OG were able to stabilize and barely edge out BIG 16-14.

In the decider match, BIG would have to face the likes of FaZe Clan one more time. This would be the fourth time they’ve played in the past two weeks. One thing remained consistent with all the other matches: FaZe could not take a map off of BIG. BIG stole FaZe’s Dust2 away in a 16-13 before dominating them on Nuke 16-9. The FaZe Clan kryptonite took the final spot at cs_summit 6 playoffs.

Speaking of playoffs, they are set to begin on June 29th at 12:00 P.M. EST. All eight teams who have made it to this point have earned a minimum of 1125 RMR points. Each extra placement earned will grant a team 125 more points towards the Rio Major. Every single match matters from here on out, expect teams to bring their very best in the coming days.