Astralis Take Final Trophy of 2020 at The IEM Global Challenge 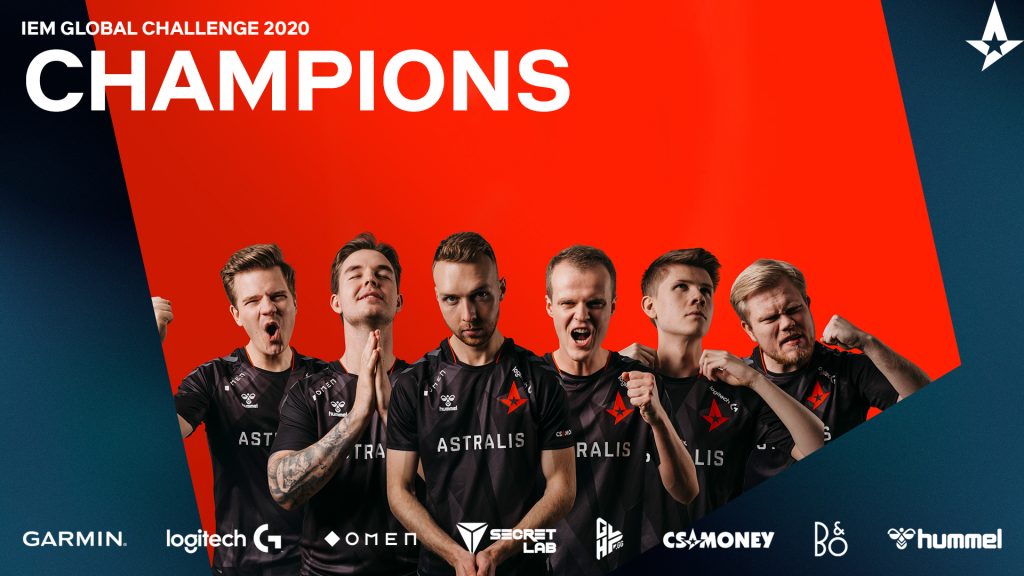 Astralis have completed their run at the IEM Global Challenge with a clean sweep of Team Liquid in the finals. (Photo courtesy Astralis)

Counter-Strike’s final tournament of the year has come to a close in the form of the IEM Global Challenge. Astralis have earned the championship with an easy 3-0 sweep of Team Liquid in the grand finals. The Danish giants have now fully recovered from their overall shaky 2020 campaign to win two of the last three events this year.

They sweep @TeamLiquidCS 3-0 in the Grand Final.

Nearly Eliminated Out the Gate

Astralis began their run at the IEM Global Challenge in Group A. Their first opponents were Complexity. The juggernaut was missing their star AWPer Valentin “poizon” Vasilev for this event, making them easy food for Astralis. Dust2 was a quick one after Astralis won six rounds to start things off. Complexity’s only big streak of rounds came at the end of the first half. They were unable to put up any resistance elsewhere. An easy 16-7 was the result.

COL’s Overpass was a little bit closer, but Astralis were clearly the much better team. Another 10-5 opening half led to a 16-11 finish in favor of the Danes. Nicolai “device” Reedtz was on fire all day, earning a 47-27 K-D ratio and 98.9 ADR over both maps.

The Winners’ match was up next. BIG had just completed a 2-1 win over tournament favorites Team Vitality which included a close overtime win on Vertigo. Astralis chose to let BIG have Vertigo again as they seemed beatable on it. At first, Astralis’ plans were going accordingly. A 9-6 CT side was followed by a second consecutive pistol round win. However, BIG would not go down without a fight. They immediately broke Astralis back with two force buys to win nine of the next 10 rounds. Astralis did manage to force overtime, but after two extra periods, it was BIG who came out on top.

Astralis had a chance to even things up on Dust2. Once again, they earned a 9-6 advantage going into the locker room thanks to 19 kills and 114.4 ADR from device. He was the only player on Astralis really performing on the map. When the sides swapped and everyone had to chip in for defense, BIG ran away with it. They immediately started bulldozing through Astralis to win 10 of 11 rounds. Dust2 ended 16-10 for BIG, giving them the first playoff spot.

Astralis now had to face off against Vitality in an elimination game. Right off the bat, things looked grim. Astralis’ Nuke pick went completely awry after a 13-2 CT side start by Vitality. Three players on the French squad broke 20 kills in the 18 total rounds played. Meanwhile, no Astralis player broke double digits.

Down a map in record time, Astralis had to win on Dust2. They opened things up with a pistol win then took a crucial second round against Vitality’s force thanks to an ace from none other than device.

Astralis ended the half up 10-5. Even with that lead, Vitality were able to match their efforts thanks to Mathieu “ZywOo” Herbaut and force overtime. It took another double OT to decide a winner. After clutches out of Andreas “Xyp9x” Højsleth and device, Astralis evened up the series 22-19.

Inferno was the final battleground to determine who would make the playoffs. On this must-win map, Astralis gave their best team showing of the match. After going down 4-2 early on their T side, the Danish squad led by device rallied back to an eight of nine-round win streak. This time, Astralis’ 10-5 halftime lead would not be squandered. They held Vitality to a whopping zero points in the second half. A dominant 16-5 finish put Astralis through to the playoffs.

Astralis’ IEM Global Challenge semifinal matchup pitted them against Natus Vincere. The CIS squad had gone a perfect 4-0 in their group and were looking like strong competitors. Astralis met them head on with an Inferno first pick. Energized from their performance against Vitality on the map, Astralis repeated the deed. The trio of device, Xyp9x, and Emil “Magisk” Reif all put up an HLTV rating of 1.17 or higher. Na’Vi were outperformed across the board, allowing Astralis to take map one 16-11.

For their pick, Na’Vi went to Nuke. The map looked to have become a bit of a sore spot for Astralis at this event. Na’Vi’s suspicions proved correct as they were able to turn an even 7-8 score into a dominant 16-9 victory from the CT side.

With the series evened up, it was on to Train. Neither team had played the map yet this tournament, so anything was possible on the tiebreaker. The first half may have ended with another 8-7 in Astralis’ favor, but that was on the T side. It was lights out once they swapped to the defense. Na’Vi didn’t look to have enough preparation as they kept getting shut down. With every player over a 1.00 HLTV rating, Astralis completed the series with a 16-11 win.

Astralis had now earned their third consecutive Grand Finals appearance at IEM Global Challenge and were favored in the matchup against Team Liquid. The North Americans had done admirably to make it this far. They were not projected to be anywhere near top two material, yet here they were. Still, taking down Astralis would be a tough ask.

Map one was Inferno courtesy of Astralis. The first two rounds went one apiece. Astralis would secure the economic advantage after a 1v2 from device in round three. Once Liquid had their guns, they stood tall to earn their first lead of the match. Astralis proceeded to break them again after a crazy post-plant defense out of device.

A 9-6 first half was the result. Astralis then opened up their defense with five straight rounds to hit 14 on the scoreboard. Liquid tried their best to come back, but the deficit was too great. Inferno went to Astralis 16-11.

Next up was Overpass. A complete two man show ensued featuring Peter “dupreeh” Rasmussen and device. The duo completely crushed Liquid’s efforts, putting up a combined 47 kills and 306.1 ADR in the first half. Their complete master-class in forward holding at fountain allowed Astralis to run up the score to 13-2. Liquid saved some face in the second half by getting nine rounds on defense, but once again fell flat. Another 16-11 finish put Astralis on match point.

Dust2 would be where the series would be laid to rest. At minimum, Liquid put up their best first half of the match. However, Astralis still went into the locker room at an 8-7 advantage. Astralis would take the second pistol and the lead that came with it, but Liquid were still hanging on. After a couple of close contested rounds, device put the series on ice with his candidate for play of the year.

From there, Astralis closed out the map 16-10 to earn the IEM Global Challenge crown.

Although Astralis had their ups and downs this year, their fortitude and ability to come back from any setbacks is always admirable. They always have what it takes to be the best team in the world. When they play like this, it is hard to deny them that title. Astralis have earned their break and will be back to defend their status at the BLAST Global Finals in mid-January.