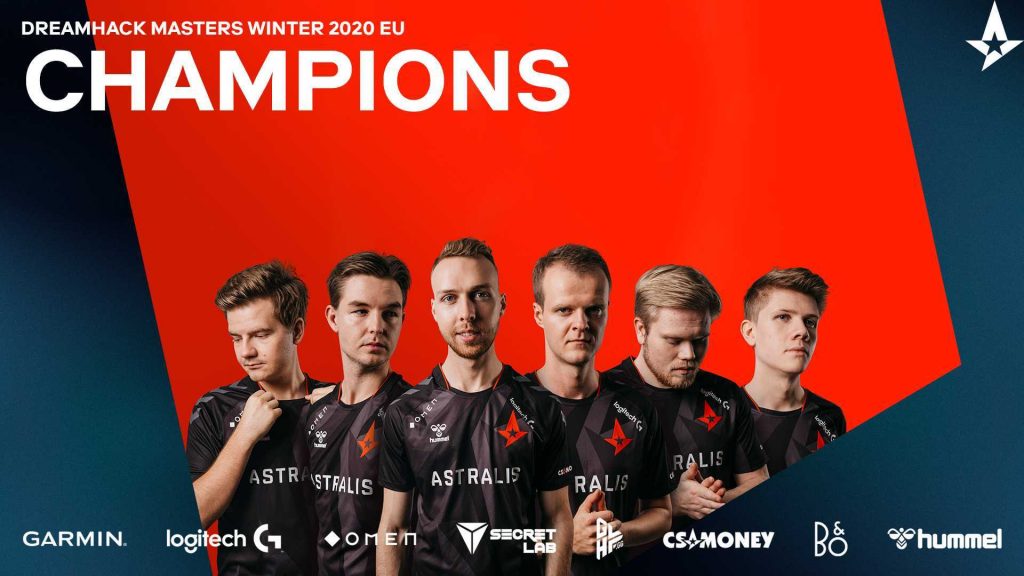 Astralis are the DreamHack Masters Winter Champions after taking down mousesports in the Finals. (Photo courtesy Astralis)

Astralis have become the champions of DreamHack Masters Winter after coming through the Lower Bracket in Group B. The Danes made the victory work using all six members of their roster, while taking down a resurged foe in mousesports in the Final, and toppling NA’s best FURIA, during the semis. Astralis are on form and rightly deserve to take home $60,000 USD and a large sum for the ESL Pro Tour.

But Astralis’ victory at the event is not the only newsworthy story coming from the Playoffs. Rosters like GODSENT made their way to the semi-finals, while huge teams like Heroic failed to advance from the Quarters. There is a lot to dive into this event.

Giants fall in the Quarters

Heroic and Complexity are two big teams that fell in the Quarterfinals. Both teams are two of Europe’s best and are two teams attending the IEM Global Challenge commencing December 15th. For some of the best teams in the Worlds, they were expected to advance from the Quarters. However, both teams got knocked out.

The biggest offender of the two is Heroic. Heroic has been a dominant team in the online era, taking down many teams and making many finals and semi-finals over the last few months. Their trajectory means we should expect them to make the semis of this event, but they were upset by GODSENT, a team that has surprised many in DreamHack Master Winter. Their series went to 2-1 for GODSENT, who won their Inferno 16-10 and Train 16-10. The only map Heroic won was Vertigo 16-14, showing that GODSENT was extremely competitive against the second-best team in the world.

On the other hand, Complexity had a much more formidable opponent. Complexity had to play FURIA, a team that has been the best in North America for several months now. While it was a good matchup, the result was quite shocking. The hold W no stop FURIA dominated the Juggernaut, beating the EU side 16-7 and 16-8 on Overpass and Nuke respectively.

GODSENT’s narrative is the best narrative throughout the event. The team has defied expectations, upset Astralis in the first round, and took down Heroic. The storyline brought them to mousesports, a rematch of their group stage Upper Bracket Final.

GODSENT performed well in the opening of their mosuesports series, gaining yet another win on Nuke, beating mousesports 16-13. In the second map, it seemed that GODSENT was looking to win the series, as they began the first half strong, but mousesports picked themselves up and managed to crawl back the half. On the flipside, mouz and GODSENT remained competitive, but mouz ended up winning Mirage 16-13.

Inferno was the deciding map, and a similar story was recurring. GODSENT opened strong, going 7-0, but lost control with mousesports gaining eight rounds in a row. The momentum carried over to the next half, with mousesports winning seven rounds despite losing the second pistol round. With that spree, mouz found themselves winning the series after GODSENT’s two round wins. With that result, GODSENT departed the event after one excellent underdog story.

On the other side of the bracket, Astralis banged out the best NA had to offer. The Danes destroyed FURIA 2-0 going 16-7 on Overpass and 16-6 on Nuke. FURIA got a taste of their own medicine as they got stomped as hard as they stomped Complexity. What makes this interesting is that Astralis decided to give Lucas “Bubzkji” Andersen a shot after benching Andreas “Xyp9x” Højsleth for the second game of the series.

During the Nuke game, Bubzkji was the Astralis’ caged animal set on FURIA. The young Danish superstar found himself gaining a 3k, showing the world he had what it took to take big rounds for his side. While Bubzkji had his moment, the rest of Astralis’ carry players performed even better, with Nicolai “dev1ce” Reedtz on a 1.57 rating, Peter “dupreeh” Rasmussen earning a 1.45 rating to name a few examples.

If you hadn't noticed, now you have! @Bubzkji is here and with a nice little 3K! 🔥#DHMasters pic.twitter.com/g34IcWNqzW

With mousesports and Astralis heading to the DreamHack Winter final, it was a rather interest series. Mousesports looked the most competitive they had been all year, with Chris “ChrisJ” DeJong clutching rounds, Robin “ropz” Kool getting his pop off moments,

For both mouz and Astralis, they managed to trade their map picks in the first two maps of Train and Inferno. Mousesports’s double AWP setup usually is a dominant tactic for them, but Astralis destroyed them 16-5. It appeared that the key of the situation as Device, who managed a 1.81 rating, compared to ChrisJ’s awping who was on a 0.64, detailing how damaged the mouz economy was on Train.

Meanwhile, mousesports Inferno was intense, returning Astralis the favour by getting a 16-3 victory. Another worthy note is Aurimas “Bymas” Pipiras getting his first ace on a best of five in a top tier event. The Lithuanian secured an ace despite initially being in a 3v5 situation; it was a grand showing for the side.

TALK ABOUT BOUNCING BACK! 12-3 for a half! @Mousesports is on fire! 🔥#DHMasters pic.twitter.com/94Y7Li9P7d

But that was the end of the success came for mousesports. Astralis secured a 16-13 win on Nuke, which was a primarily due to Device and Emil “Magisk” Reif carrying the game for their team. Mousesports numbers were not too insane compared to Astralis top two players, but their players worked incredibly well, the clutch factor for Astralis seemed too much. Another point to note is this is Astralis’ second rotation of Bubzkji and Xyp9x specifically for Nuke. No doubt this Is something to keep an eye out on as Astralis’ strat book develops.

On the final map of Vertigo, the CT side of both teams was not particularly great. Both teams found themselves struggling to attack sites. For mousesports, ropz defence of B site was thwarted continuously, until the final three rounds of Mouz’s defense. As for Astralis, a lot of the CT rounds they won relied on mouz spraying the wrong spots after the post-plant, such as round 24 with Device’s clutch. This continued into the double overtime of the map, but Astralis pulled the victory out after the long tech delays that extended the duration of the series.

With the victory on Veritgo, Astralis has crowned the Masters of DreamHack Winter Europe. Astralis maintain their trajectory for returning to the top. Astralis now have an excellent staging platform to take the remaining two events in 2020, the BLAST Premier Fall Finals and the IEM Global Challenge. Can they gain another trophy before the year ends?