Alliance Drops Fata and 33 Ahead of TI10 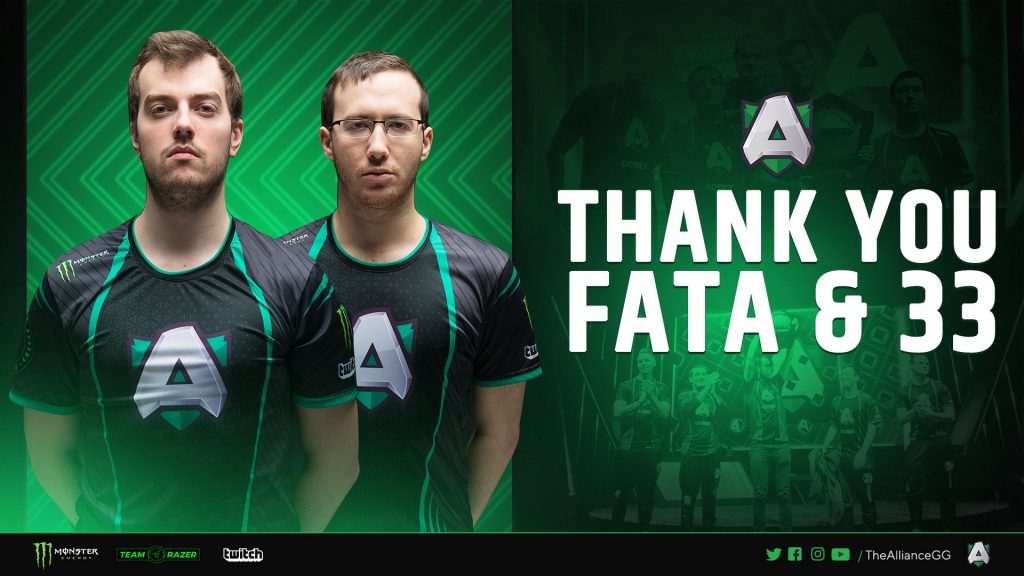 Fata and 33 were initially acquired in October 2019, but mediocre results have led to their release. (Photo courtesy Alliance)

Alliance have released Adrian “Fata” Trinks and Neta “33” Shapira in a surprise roster shuffle. The move was announced on Twitter with an accompanying blog post on the team’s official website.

The surprise roster shuffle comes after a respectable amount of success for this Alliance team. The squad currently stands 6th in the Dota Pro Circuit rankings and holds impressive victories over the likes of Team Nigma, Team Liquid, and Natus Vincere. However, Alliance have failed to reach the podium in any of their recent DPC events, and missed out on qualifying for the ESL One Los Angeles Major, before it’s a postponement and move to an online format.

As the announcement notes, both Fata and 33 were acquired from the stack that made up Ninjas and Pyjamas’ 2018-2019 DPC lineup. The decision to drop them at the same time, and comments made in the team’s statement, insinuate a desire to change things up and add more new-blood to the Alliance roster ahead of a “home turf” run to The International 10.

In comments released alongside the announcement, mid-laner Linus “Limmp” Blomdin explained the move: “These decisions are never fun to make, but we feel like we need to switch things up to be able to grow further. Thank you to Fata and Neta and best of luck.”

Alliance’s founder, CEO, and TI3 champion, Jonathan “Loda “Berg, also commented: “I’m very thankful for everything Fata and 33 has achieved with our team. When they joined us in September last year, we knew they wanted to prove themselves and we could not have asked for more with the performance and results they have achieved so far with Alliance.”

In his own post addressing his release Fata describes the release as a “surprise” and a “disappointment” in a TwitLonger post: “33 and I were removed from Alliance. This came as quite a surprise to me and I feel pretty disappointed, since we created the team together. I’m trying to remain positive, since bitterness helps nobody. I will use the time to take a break from the game, working on myself and resetting from dota a bit. Afterwards Neta and I will look to rebuild a team with fresh energy and ambitions.”

Alliance’s lineup now consists of just Nikolay “Nikobaby” Nikolov, Limmp, and Simon “Handsken” Haag. The team noted that more news about their roster will be revealed in upcoming days, and thanked their fans for continued support. For additional information on the roster shuffle, check out Alliance’s official website.