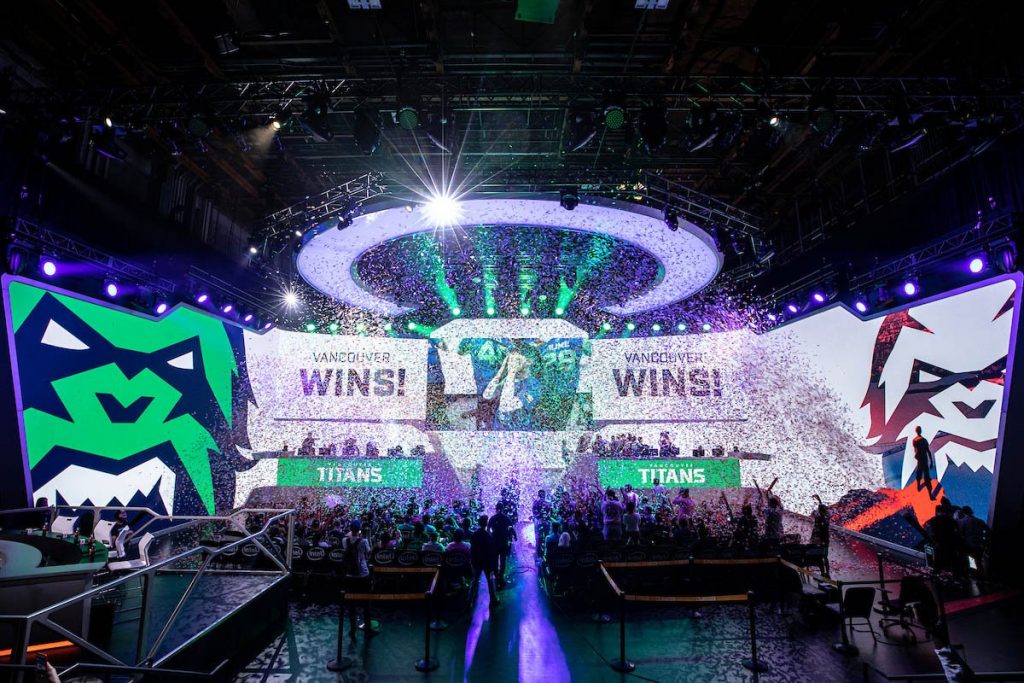 The Vancouver Titans are the first finalists set for the OWL second season finals. (Image via Blizzard)

The Overwatch League’s Winner’s Bracket Finals took place on Friday, September 13, with the Vancouver Titans taking on the New York Excelsior. Expectations for a hard-fought match were, dare I say, exceeded by two of the strongest teams the league has to offer. Ultimately the Titans came out ahead, but it was a seven-map journey to get there.

The series kicked off on Lijiang Tower, where both teams employed the all too familiar Sigma/Orisa tank duo. This pairing would become a staple throughout the match, backed by the ever-threatening Reaper/Doomfist DPS combo. Hyunwoo “Jjanu” Choi’s Sigma alongside Hyojong “Haksal” Kim’s Doomfist led the Titans to a commanding 2-0 victory on Lijiang, securing for Vancouver an early 1-0 lead.

New York may have been a bit slow out of the gate, but quickly regained their form going into map two, King’s Row. Once again running Sigma/Orisa for tanks, Reaper/Doomfist for DPS, and Lucio/Moira for support, the NYXL cruised through the streets of King’s Row, finishing with a respectable 1:44 in the timebank. Vancouver tried to regain their momentum, but unfortunately only made it through the second checkpoint, leaving the scoreline tied up 1-1 on the match.

One minute and 50 second overtime Point B cap for @VancouverTitans, nbd. #OWL2019

Map three brought the teams to the Temple of Anubis, where team composition began to have slight variations. NYXL elected to swap out Doomfist for Mei to help control the early chokepoints on defense. Their resolve seemed strong, but a very well-coordinated flank by the Vancouver Titans’ Reaper and Doomfist allowed them to break through New York’s lines and capture both points. Vancouver stuck with the same comp on defense while NYXL brought out Jong-Ryeol “Saebyeolbe” Park’s infamous Bastion for attack. Bastion’s immense damage would prove too much for Vancouver and the NYXL would also capture both points, and eventually taking the map in overtime.

With NYXL taking the 2-1 lead, the teams head for Watchpoint: Gibraltar. Gibraltar would prove to be a lifeline for Vancouver, who marched headstrong through the map with a blazing 3:37 to spare. The former Runaway team members looked as sharp as ever, with NYXL only being able to reach two out of the three checkpoints. The match was, once again, tied.

Next up was Busan, a close-quarters map that was sure to bring plenty of brawls featuring the notorious Reaper/Doomfist. To that end, the map did not disappoint. Haksal was given a license to kill on Busan and absolutely decimated the NYXL’s chances of winning the map. His Doomfist proved far too much to handle in the tight spaces near the control points, netting his team a 2-0 sweep of the map to put the Titans at match point.

However, the Excelsior were ready to make a statement on the streets of Numbani. Both teams managed to make their way to all three checkpoints, meaning yet another overtime round. New York’s overtime attack took them all the way through Numbani AGAIN, without the normally allotted time bonuses for checkpoints. Seemingly stunned, the Titans could not even manage to take Point A, giving the NYXL a resounding 6-3 win on Numbani and leaving the teams at 3-3 going into a tiebreaker round.

Our boys are out of this world!

The final map of the series was Dorado, with the victor securing a spot in the Overwatch League Season 2 Grand Finals. Up first were the Titans, who stuck to their tried and true Sigma/Orisa, Reaper/Doomfist, and Lucio/Moira composition to complete the map with no time left. Upon the switching of the sides, the NYXL went for broke with a Pharah/Bastion DPS lineup intended to snowball any momentum they might gain on the first fight. Unfortunately, the Titans repelled their first push with some very aggressive positioning and the Excelsior were forced to switch back to the usual Reaper/Doomfist. New York were able to reach the first checkpoint, but the Titans stood strong, stymieing them before they could even reach the second point.

After a marathon of a match, Haksal and the Vancouver Titans have punched their ticket to the Overwatch League Grand Finals in Philadelphia. Despite their loss, the NYXL have merely been sent to the loser’s bracket. This means that if they can pull off a win on Sunday against the San Francisco Shock, they too will advance to Philly and give us, the OWL fans, a very exciting storyline to follow come September 29. The Shock and NYXL will face off at 3:00 p.m. EDT on Twitch, Disney XD, and on the ESPN App.