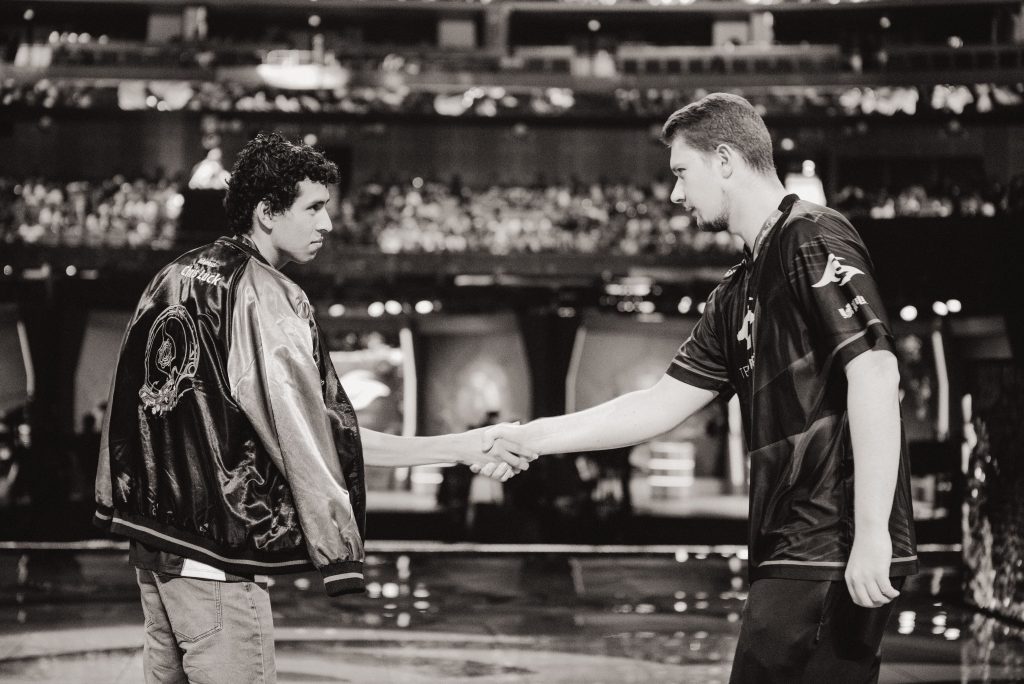 Infamous were one of three eliminated teams at The International 2019 today. (Image via Valve)

We’re more than halfway through the main event of The International 2019, and at the start of the day, only eight teams remained. After a trio of quick elimination matches (especially compared to yesterday’s pair of the best-of-threes that went all the way), we find ourselves short another three teams. Royal Never Give Up, Infamous, Evil Geniuses are the eliminated teams, whittling us down to our final five.

We take revenge for last year's loss and move in to the Final 4, but the hardest challenges lay before us.

It's time to rest up and come out swinging tomorrow! #LetsGoLiquid pic.twitter.com/NePXqlJ30r

Royal Never Give Up had been a team in a constant state of flux this year, with a multitude of roster swaps. This stood in contrast to Team Liquid, an organization that has been defined and almost shoehorned by a single roster change story. Both lineups still had a lot to prove, in spite of each team’s incredible runs this tournament. What’s more, the Chinese meta hasn’t always translated out of the region, and yet finally at TI, PSG.LGD and Vici Gaming have shown that consistent success is possible for a Chinese meta team.

RNG, the team which had perhaps best retained that, aggressive, unusual style, adding such wrinkles as Abaddon offlane, and a commitment to roaming. Now they faced a huge test, as Liquid proved they could pick equally aggressive and unusual picks. Avoiding some of the more popular carries, Liquid opted to select the first Nightstalker of the tournament and paired it with an Io and Gyrocopter for good measure. RNG seemed to have a solid lineup to counter the Io, and the danger of a hyper-scaling gyro, with lots of catch and an Ember Spirit pickup for Gao “Setsu” Zhenxiong.

In game one, Liquid chose to give Elder Titan a solo lane initially, so he could quickly pick up level three. This early move almost backfired, as RNG got the best of the initial aggression. RNG’s draft ramped up faster, and their team fighting seemed cleaner until Liquid’s carries began to surge. With Gyrocopter, Liquid out farmed their opponents, scaling past them and beating them in straight fights.

Next game, Enchantress slipped through the bans. Liquid proved they were not afraid of one of the tournament’s most potent carries, counter-drafting with a teamfight-orientated build. More early aggression from RNG set up a long game, as the carries sieged down Liquid’s base. However, Liquid held out. A series of back-and-forth team fights ended in defeat for RNG. No single mistake had lost them the game. Instead, their opponent’s adaptability and perfect execution on team fights had proved their undoing.

[RNG 0:2 TL] Our #TI9 journey has come to an end, but we’re so proud of how far we’ve come. Until next time! Good games, @TeamLiquid ! #Dota2 #RoyalNeverGiveUp pic.twitter.com/1GncU4lWhg

Royal Never Give Up went out in seventh-eight place, taking home at least US$847,750, while Team Liquid waited to face Evil Geniuses later in the day.

Infamous has had one of the most unexpected and spectacular runs of the tournament. For a team that many had projected to not even escape group stage, an eighth-place elimination is nothing to be ashamed of. As the most successful South American team in Dota 2 history, they’ve set a high bar of performance, which teams that follow in their path will struggle to match.

After defeating Keen Gaming and Newbee to arrive in this position, Infamous finally reached the end of the line against Team Secret. Secret has underperformed this tournament. After dropping to the lower bracket, the team continued to struggle, as they found themselves pushed to the limit yesterday against Mineski. Today the same problems plagued the team, as they attempted to fix the gaps in execution which had almost lost them their last series.

Game one against @Infamous_GG is in the bag! Second game coming up shortly. #SecretFighting #TI9

To Infamous credit, they almost replicated Mineski’s success, pushing Secret to an hour-long game in their first meeting. With Adrian “Wisper” Cespedes Dobles on his Magnus, his most successful hero of the tournament, and Infamous’ carries on a slightly unorthodox Phantom Lancer/Riki combo, Secret felt it had to farm to extremely late to win the game safely.

However, in game two, Secret’s confidence was bolstered. With no risk of instant elimination, as was the case in their game versus Mineski, Secret was able to speed the pace on a team composition built around catch and team fighting. As a result Infamous found themselves eliminated in quick order, as Secret’s carries snowballed out of control. Secret advance, hopefully with renewed vigor, and the issues of the early tournament resolved.

Our journey for the Aegis has ended. We leave this International in Top 8 and very happy to make history again. We are very grateful with all the support we have been receiving this days. Without you none of this would be possible. ¡Long live South America Doto! #Ti9 pic.twitter.com/NmOEGNYEcl

Infamous took an impressive seventh-eight place, and at least $847,750 in prize money back to South America. Team Secret will face Vici Gaming tomorrow.

The dominance of Liquid

After their victory earlier in the day, Team Liquid looked primed to continue their dominant run. Unlike other teams which have fallen to the lower bracket, TL has been motivated beyond all expectations by the competition they’ve faced in the tournament. What’s more, they’ve done so in a series of methodical games, with radically different team compositions.

EG, on the other hand, has stuck to a very similar pattern of play. They’ve adapted to the tournament meta, utilizing the same carries in multiple games. However, their style has faltered against teams which can outplay a fed carry, either with a better draft, or reliable team fighting. And so too was this the case against Liquid.

There was no hiding from @Liquid_Miracle and his Chronosphere!

With Enchantress and Leshrac banned in both games, EG relied on more team fight focused compositions, leaving later picks to find a carry. In both games, it was the Lifestealer which EG selected for Artour “Arteezy” Babaev, and in each case, it failed to scale as the team had hoped. Liquid dominated, a raw display of talent that across a variety of heroes.

Shaken by their initial loss, EG let Liquid pick Alchemist in the second game. Alchemist has been a worthwhile a ban versus most teams in this tournament, but against Liquid, it’s a must ban. With a Dark Seer to buff him and Elder Titan for catch and utility, Liquid seemed unstoppable. By 20 minutes, Aliwi“w33” Omar had almost double the net worth of the next nearest player. By the end of the game, Liquid was so strong, even the three and four positions were able to 1v2 EG. The last North American hope for the tournament crashed out in a humbling loss.

GGs to @TeamLiquid — they continue their lower bracket run at #TI9, and eliminate us from the tournament.

We finish in 5th/6th place at the end of a long and difficult Dota season. We appreciate your support the entire way, even if it didn't end in the victory.#BleedBlue pic.twitter.com/5CGVmb0cfc

Liquid has been unstoppable in this lower bracket, going undefeated for the past seven games, while EG faltered in each of their victories, finally losing to a team on an insatiable roll. RNG suffered a similar fate, discovering how impressive TL’s range of champions and strategies truly is. Surprisingly, it was Infamous today who had the best chance of defying the odds and advancing. They faced a shaky Team Secret, who have only just regained confidence.

Tomorrow at The International 2019, we could potentially see each of these become eliminated teams. Only a continued level of high performance from Liquid and resurgence from Secret will ensure otherwise.