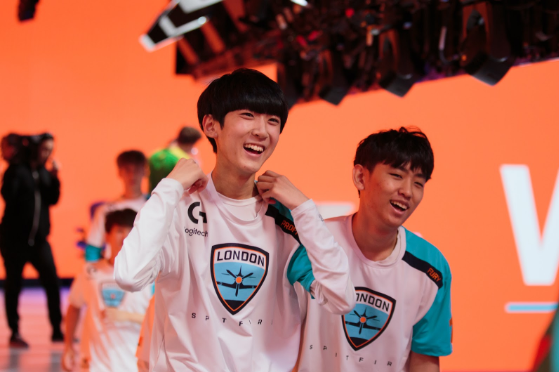 Spitfire will reportedly be moving their operations to South Korea. (Photo courtesy Blizzard)

The Vancouver Titans and the London Spitfire may be moving to South Korea in the not-so-distant future. The relocation appears to be spurred on by the ongoing COVID-19 pandemic, as countries encourage their citizens to return home. The players and coaching staff for both the Spitfire and the Titans are made up entirely of South Korean citizens, so it would make sense for these teams to return to South Korea.

The alleged relocation was reported by Sasha Heinisch, who reached out to the Vancouver Titans who then confirmed that they are in the process of “imminently” relocating their team to South Korea. Heinisch also stated that the London Spitfire are planning a move, which is further evidenced by the Spitfire cancelling their upcoming Overwatch League scrimmages. However, the Spitfire have not yet commented on any relocation.

Should these teams move to South Korea, the Overwatch League would likely be forced to make changes to the schedule. Head coach of the Toronto Defiant, Félix “Féfé” Münch, stated that many scheduled upcoming matches would have to be cancelled or changed, since the Overwatch League’s schedule is currently based on the physical proximity of OWL teams. OWL is moving online, so the current schedule is built to minimize latency and connection errors which would arise from cross region play.

An altered schedule is not necessarily bad news. The current schedule for Overwatch has very few teams playing in Asia, with only four Chinese teams currently playing in the region. Ironically, Seoul Dynasty relocated from South Korea to Los Angeles in February. As it stands now, the Chinese teams located in Shanghai, Guanzhou, Hangzhou, and Chengdu are scheduled to battle against each other several times throughout the remainder of the season. If the Titans and Spitfire move to that region, the schedule would end up somewhat more balanced, since there would then be six teams in Asia.