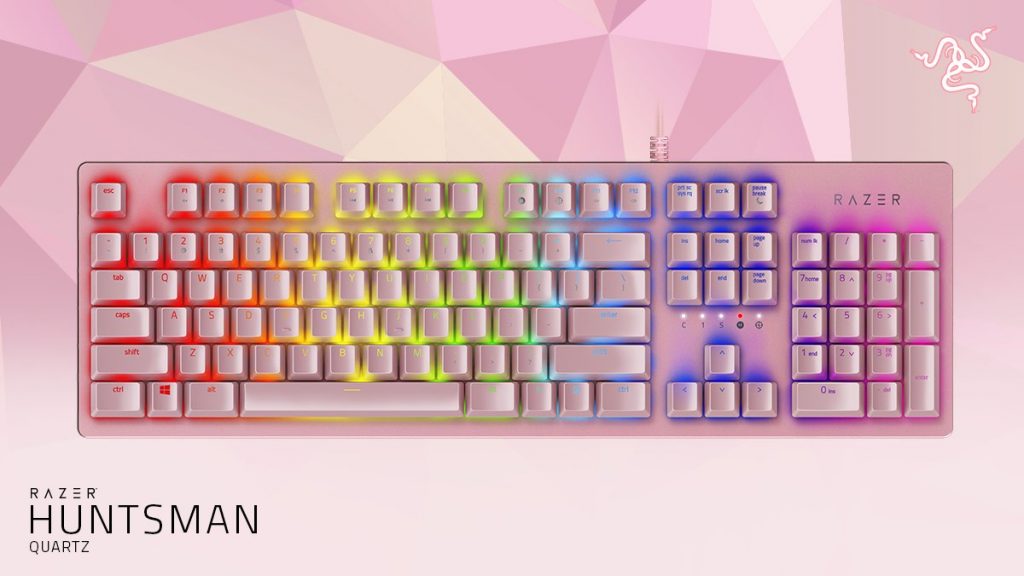 Is the Razer Huntsman Quartz just style over substance? (Image via Razer)

If you want the Razer Huntsman Quartz because it’s pink, and you want to know if it’s any good, let me save you the trouble of reading the rest of this review.

At $149.99 USD, the Huntsman has been doing numbers as a mid-range gaming keyboard. I’ve always loved its opto-mechanical switches. Traditional keyboard switches slide one piece of metal onto another to determine that they’ve been pressed, and provide the ‘click’ feel. Optical switches instead use lasers to determine when a key has been pressed, which allows switch designers freedom to choose how a key feels, completely separating the ‘has it been pressed’ logic from the springs and levers that determine the feel.

When compared with the switches Razer would usually use in a keyboard like this, the improvement in feel from separating these two functions is obvious. There’s less resistance, and a subtle but evident improvement to the feeling when the key fires. For work and for gaming, typing is a pleasure. There’s less force required than a Cherry MX Blue switch, meaning your hands won’t get tired, and unlike a Cherry MX Red switch, it still gives you meaningful feedback as to the trigger moment. 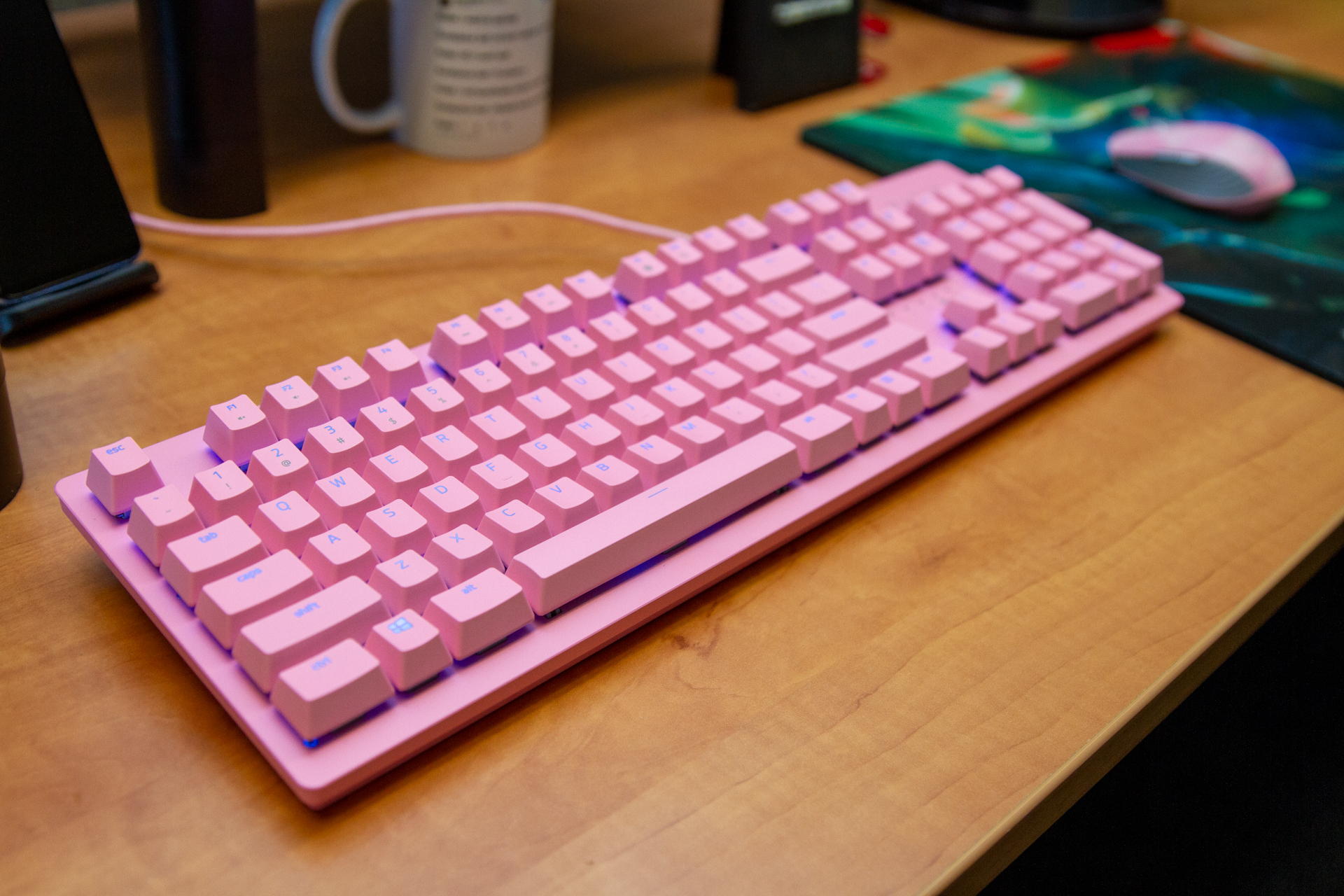 The real beauty for gamers is that optical switches can activate a lot higher than traditional mechanical switches, and you can feel it. The key ‘fires’ at 1.5mm depth, compared to 2.2mm for a Cherry MX Blue switch. That may not sound like much, but your fingers are far more sensitive than people give them credit for. The human finger can detect a surface change of 13 nanometers (1 nanometer is 1/1,000,000th of a millimeter). And it can definitely detect a 0.7mm change in when a key goes off.

Compared to the SteelSeries Omnipoint switches in the Apex Pro which can activate at 0.4mm, they’re still quite high, but it’s a significant improvement over regular mechanical switches, Razer or otherwise, and the SteelSeries is far more expensive.

The keycaps feel great, and have a slightly more grippy feel than standard Razer keys. The paint job gives it a delightfully light-absorbing matte finish that looks great but still somehow cleans easily and doesn’t attract grime. The way that the RGB lighting passes through the keys can be a little off, which can lead to some unusual glow patterns – it feels like the key markings should be more bold. When combined with the etching of the secondary key functions, it can look a little off under close inspection.

There’s no pass-through USB port to connect a mouse to, or dedicated media keys or volume knob. The Huntsman Quartz is simple and elegant. It looks great, feels great, and does nothing else. Sure, there’s a function key that turns some of the other buttons into keys for these things, but it’s awkward to hit Function and the key at the same time with one hand. On top of that, it’s difficult to see or remember which is which, so for practical purposes, it may as well not have them.

Obviously, it’s beautiful. Obviously. The flat-base design of the Huntsman comes from the largely under-appreciated Blackwidow X, devoid of the macro keys and cowling that haunted the original Blackwidow. These clean edges make it much easier to orient your hand at the side of the keyboard for games that require left hand movement. It’s such an obvious step up in both visual and feel that I hope it becomes the default for Razer keyboards ongoing. 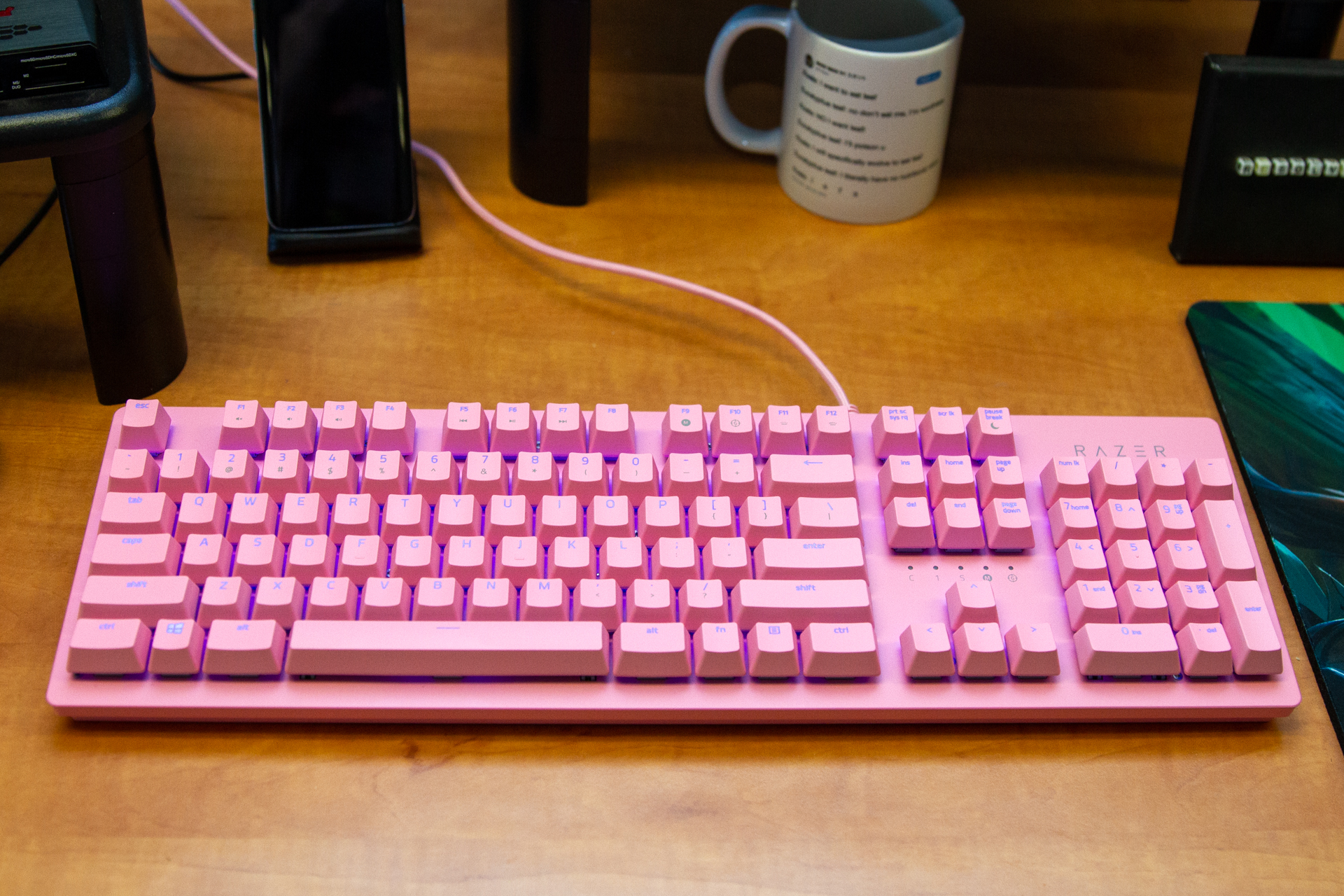 I’m a little miffed there’s no TKL option. I much prefer tenkeyless boards for gaming for the ergonomic value of straight arms, and for some reason, Razer has never really bothered with filling out their suite of keyboards with all types of layout and switch. It also doesn’t come with a wrist-rest, which feels a little odd considering they’re standard on most keyboards these days.

But let’s face it. You’re not here because you care about the sub-millimeter differences in actuation, or drivers, or what the plastic feels like. You’re here because the pink keyboard looks real pretty. Well, I’ve got news for you. It’s even prettier in real life. Photos don’t really do Razer Quartz gear justice, and the Huntsman Quartz is no exception. I’m still going to show them to you anyway, because – of course I am.

Whereas the Kraken Quartz headset is a case of ‘it’s okay I guess, but it’s very pretty’, the Razer Huntsman Quartz is both functional and beautiful. There are places where it could be improved, but not having them doesn’t feel like a tradeoff.

This keyboard could be a good pick for most people regardless of the aesthetic, but if you want the pink one, you should definitely buy the pink one.