We got a glimpse of Rampart’s abilities and maniacal laughter in the fresh trailer for Season Six on August 14th, but Respawn Entertainment have now confirmed what the brand new legend will do in a character trailer. Rampart, “the best modder in the Outlands”, looks set to be a static defender legend much like Wattson, but with far more personality.

The best modder in the Outlands, Rampart backs up her big mouth with big guns she designed herself. 😎 pic.twitter.com/3NS0cKSu6o 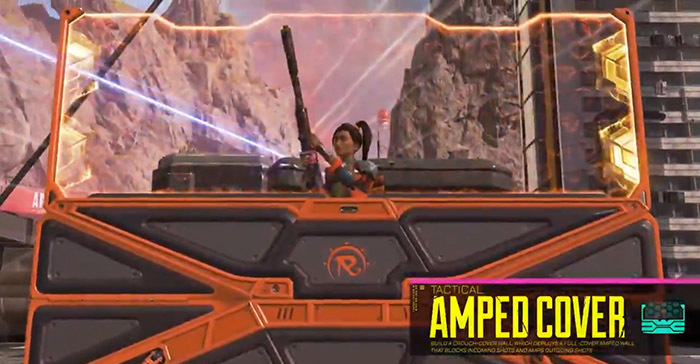 Rampart will construct her own cover-walls with Amped Cover. (Photo courtesy Respawn)

Rampart’s Tactical Ability will be called Amped Cover, and will allow players to fortify positions. After using Amped Cover, Rampant will construct a crouch-cover wall that blocks incoming fire. As an added bonus the top side of the wall will increase the damage of outgoing shots, very similar to Baptise’s Amplification Matrix in Overwatch. In the character trailer posted on August 16th (above), Rampart has three walls set up simultaneously, strongly suggesting it will have a low cooldown much like Wattson’s Perimeter Security.

Rampart’s passive Modded Loader is mentioned very briefly in the character trailer, but it is far from uninspiring. Modded Loader will boost magazine and heat capacity, as well as increase reload and recharge speed when using LMGs and her Minigun “Sheila”. The passive syncs well with the lore behind the character, and might encourage LMG weapons to get more playtime, in particular Season Six’s new addition the Volt. 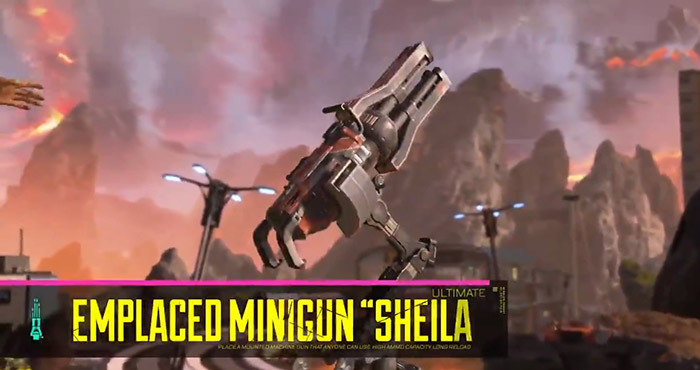 As expected based on her cameos in trailers for Season Six, Rampart’s ultimate will let her turn her personal minigun “Sheila” into a stationary turret. The Emplaced Minigun has high ammo capacity, but has long reload times. More importantly the fine print states the machine can be operated by anyone, even your enemies.

In Season 6 – Boosted, new Legend Rampart has arrived to upgrade the competition. Unearth a new way to grab better gear with the all-new Crafting system. Get amped for the new Volt energy SMG, and more!

While there is a buzz around the addition of a new legend, her abilities have stirred fears it could lead to a surge in camper comps featuring Wattson and Rampart. However, considering Rampart is a stationary target while using the minigun, she might not be as overpowered as everyone expects. One thing is for sure though, she definitely has character.