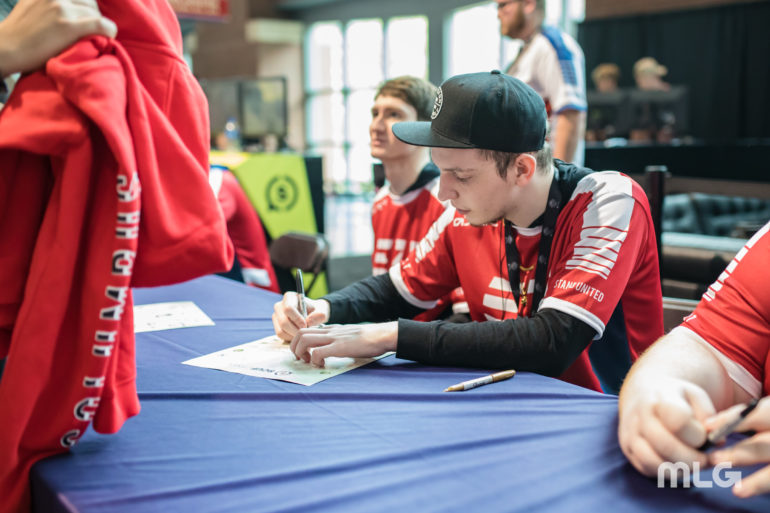 Prestinni of eUnited at the signing booth (Photo courtesy of MLG)

CWL London is in full flow with 16 of the best teams in the world facing off against each other in four groups. eUnited, never a team to count out, have found themselves put together with FaZe Clan, Evil Geniuses, and Team Envy, and they’re looking good.

We spoke to Preston “Prestinni” Sanderson of eUnited about his team’s disappointment at CWL Fort Worth, team changes coming into this event, and who he’d love to face in the grand finals.

Casting our minds back to CWL Fort Worth, eUnited placed poorly. What would you put that down to?

The vibes within the team were just off, we were having internal issues with certain players not liking each other and it really came back to bite us in the butt. We couldn’t get anything rolling.

We also had a ridiculously hard group – perhaps the most stacked group in Call of Duty history. That was a factor but not an excuse, you’ve got to beat the best to be the best.

You’ve changed a player and your coach, has that sorted out the internal issues?

Our new coach has been a massive help for us and bringing in Chris “Simp” Lehr for Jordan “JKap” Kaplan has been great. He’s better than I was at my role and I feel like I’ve improved our roster when it comes to Maddox play; not taking anything away from JKap – he brings a lot of intangibles and brings a lot of value in other aspects of the game. The main difference has been bringing in Brice “Faccento” though and we’re feeling good.

The new-look eUnited at CWL London (Photo courtesy of eUnited)

Do you feel additional pressure playing in the UK, considering the home crowd is less likely to be cheering for your team?

I don’t feel any additional pressure but I’ve noticed that every international event is put together worse than events in the States, with technical issues that can kill the vibe a little. In the past, I’ve always placed Top 16 at international events so I’m hoping to break that curse this time round.

I actually enjoy the crowd more over here because they’re original and they’re louder, it’s great to play in front of them.

There’s been a lot of talk online about teams showing up late to scrims, is this a legitimate problem in the professional scene?

Absolutely, it kills the quality of the practice. We warm up and then have to sit around waiting, we get in a lobby and invite the other team – it can take them anywhere from 30 minutes to two hours to join. It ruins scheduled practices and even full days sometimes.

If this is your job and you get paid to do it full-time, then you should definitely take it seriously.

If you were to make it to the grand finals at CWL London, which team would you most like to play?

Either OpTic Gaming or 100 Thieves, for sure. They have the biggest fan bases so the crowd would be awesome, even if they’re all against us. There’s always been a rivalry between OpTic Gaming and ourselves so I guess I’d choose them, it’d be a really good series.