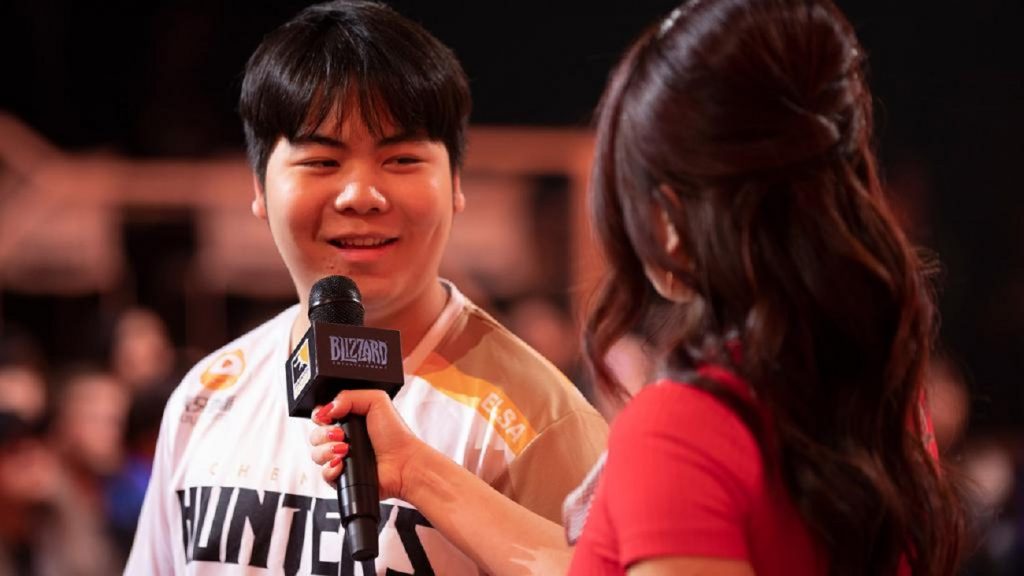 The Chengdu Hunters are feeling confident in Stage Two. of the OWL. (Photo courtesy of @OverwatchLeague / Twitter)

The Vancouver Titans have taken a firm hold of the League and have yet to lose a matchup. While other teams are trying new compositions in wake of the latest patch, the Titans refuse to falter from their Stage-One-winning strategy of three supports and three tanks. Not only are the Titans undefeated, they are also turning maps into speed runs to see how fast they can finish them. Someone should remind the Titans that this is a competitive league, not a speed run competition.

It’s going to be a rough stage for the Titan’s opponents if they aren’t able to find the chink in Vancouver’s armor. The team has been playing together for so long with a near-perfect synergy that it’ll take a miracle to outdraft, outplay and outwit this Pacific beast. While NYXL might sit in first place in the League overall, it’s only due to the Titans’ schedule as they’re currently 8-0 while the NXYL have a comfortable 9-0.

The Atlantic powerhouse NYXL won against the Shanghai Dragons in their matchup on Saturday, but while the score was a convincing 3-0, it was anyone’s game. NYXL is one of those teams that’s reluctant to give up the tried and true GOATS meta, only switching their tank hero during the matchup.

Shanghai, on the other hand, was a little looser with their hero selection and was up to trying something different in order to try for a win. And if you’re anything like me, you were really excited to see Kyungwoo “CoMa” Son and Jinkyeok “DDing” Yang bring Phar-Mercy to the fight.

NYXL might’ve pulled out the win, but I think teams need to be more willing to try out new hero lineups and strategies if they want to remain on top. Shanghai had the right idea by playing around with strats, because NYXL’s win could’ve been attributed to their players and not their hero lineup considering how close some of the maps were.

.@Mano_OWL with the hang time shatter

As a fan of both the Boston Uprising and the Toronto Defiant, Saturday’s match was definitely a nail-biter. Both teams had a lot to prove after the Stage One Playoffs and they were relentless in their push for a win.

Toronto took the first two maps on Buson and Hanamura quite convincingly and had a lot of fans calling for an easy 3-0. What seemed to be an easy win for the Defiant quickly became an overwhelming challenge as Uprising stole Eichenwalde and defied the Defiant on Rialto.

The fifth and final map on Oasis proved to be too much for Defiant. The Uprising cinched the win securing their third reverse sweep in a row! The Boston Uprising have definitely become a second-half team. It’s encouraging to see them continue to prove they are a contender in the Atlantic Division. It’ll be interesting to see if they continue their second-half streak or if they’ll be able to win a map or two from the start. It’ll put less pressure on the team if they can win a map early on, but maybe it’s the pressure that gets Boston to perform better.

There are teams in the Overwatch League constantly pushing for excellence that rarely deviate from the meta. And then there are teams that seem to throw caution to the wind and try anything they can to find a win. The Chengdu Hunters and the Washington Justice are two examples of the latter. On Sunday, their hero selection pool definitely proved that both teams were willing to try anything.

During the matchup, the Hunters and the Justice drafted 27 out of the 30 available heroes in competitive play. While both teams have demonstrated their willingness to try any and all team comps, Wenjie “Elsa” Luo from the Chengdu Hunters attributed that trait as a Hunters quality. In a post-match interview, he said that Hunters believe that they will be a strong team this stage and that they will, “pull out even more varieties of team comps.” This is a great strategy for a team in a League that was so heavily inundated with the GOATS meta until only days ago. It is hard to imagine the Hunters drafting their lineups with even more variety!

The Hunters had a solid win over the Justice and while their win was expected, their hero selection gave us major flashbacks.

Stage two has already sparked a change in the meta and the games are slowly moving away from the predictable GOATS. It’s encouraging to see so many teams stepping outside their comfort zone to really try something new, like the Chengdu Hunters and the Shanghai Dragons.

This Thursday’s rematch between the Vancouver Titans and the Seoul Dynasty is going to be a spicy match up with a lot on the line. The Titans denied the Dynasty a chance at the Stage One Finals, and the Dynasty will be looking to even the score. We also have another storied rematch between the London Spitfire and the Philadelphia Fusion on Saturday. The Fusion took the win off of London to kick off Stage One, and I’m sure that London will be looking to claim another win this Stage. Be sure to tune into the Overwatch League this Thursday at 7 p.m. EDT to kick off Week 2.