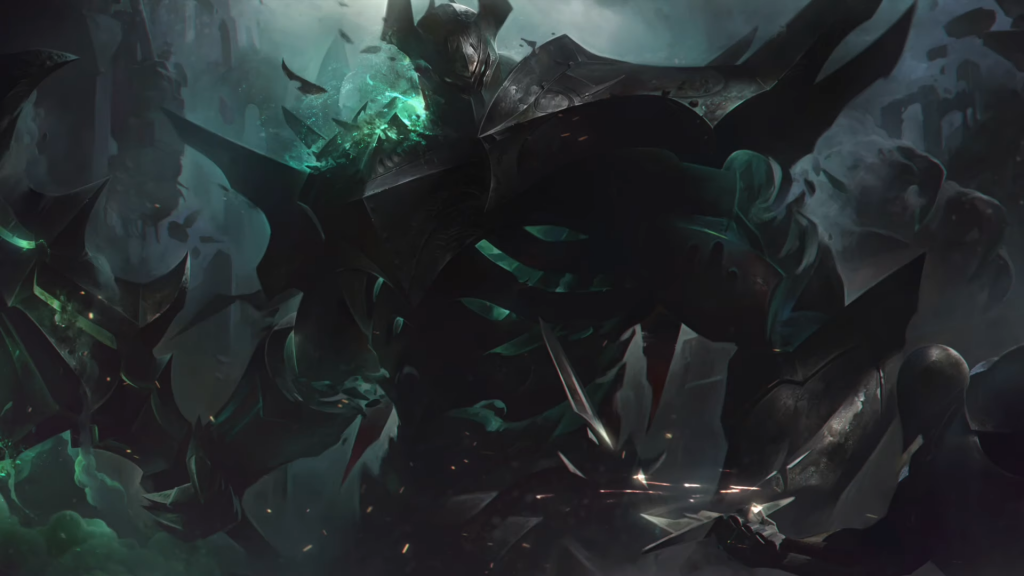 League of Legends' Mordekaiser gets a new look to go with his new abilities. (Image courtesy of Riot Games)

Mordekaiser’s reworked abilities, as well as a new visual look for the Master of Metal, has now been officially announced by Riot. The new overhaul of the old champion has been helmed by Ryan “Reav3” Mireles, and changes a lot about the loveable mace-wielding warrior that has long threatened Summoner’s Rift with his resummoned ghosts.

Most notably, Mordekaiser will no longer have access to his old ultimate ability, Children of the Grave. The ghost-grabbing power, which normally saw the Master of Metal grab a slain Drake to take mid or bot lane, has been replaced by a new ultimate – Realm of Death.

Mordekaiser’s new ultimate is basically the physical embodiment of “1v1 me” in League of Legends. Once used, Mordekaiser “banishes” the chosen enemy champion to the Death Realm, where the two engage in a seven-second one-vs-one battle. If victorious, Mordekaiser keeps partial stats until the defeated enemy has respawned onto the Rift.

These changes to the dark mage’s kit mean it’s likely we’ll see a change in how Mordekaiser is played. Over the years, he has been thrown into a number of different roles to see where he could work. Most notably, he took over marksman roles in the bot lane so that he could be close the Drakes he was planning to turn into spooky ghosts.

Now he fits more in the wheelhouse of a player who likes to perform outplays and show off their talents on a major stage. If Irelia or Xin Zhao’s ultimates conjure up thoughts of an arena, Mordekaiser fulfills that promise and gives boosts to the players who can win the mini-skirmishes they set themselves up in.

Mordekaiser’s basic abilities are also set for changes that will benefit him in this spectral one-vs-one prison. His new W, “Indestructible,” does what it says on the packet, making Mordekaiser stronger by absorbing damage dealt to him, while his new E, “Death’s Grasp,” drags enemies towards him through a skillshot mechanic.

Morde’s major changes also go a long way to make him more terrifying when chosen on the Rift. For a character that’s supposed to be a dark and towering titan, his flat and flappy pizza-feet from years gone by never really filled that space adequately, while bringing back ghosts is a bit creepy, but not scary.

Being caught in a dark spectral prison where it’s just you, and a massive steel golem with a mace? That’s a little more like it, and it seems like Riot has already gone in the right direction with the rework, at least before the rework as hit live servers.

If you want to have a deeper dive into Mordekaiser’s abilities, Riot also released a YouTube video that goes over the changes.