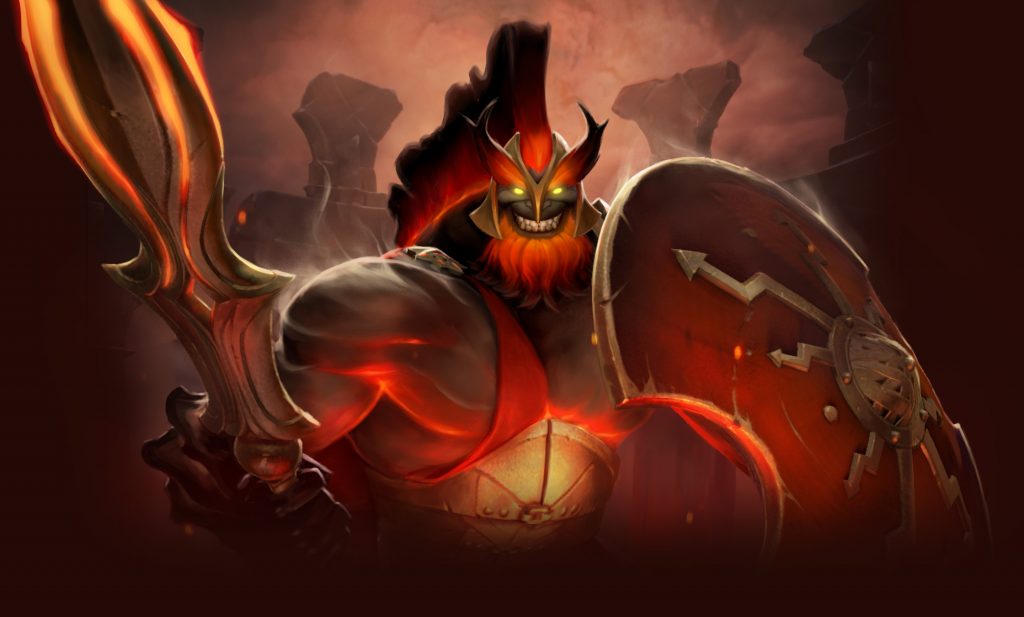 Intended as a melee carry, the new hero has a toolkit emphasizing his ability to tank and disable the enemy. (Image courtesy of Dota)

Today, Valve added Mars, God of War, to the eclectic collection of Dota 2 heroes. Intended as a melee carry, the new hero has a toolkit emphasizing his ability to tank and disable the enemy.

The hero’s aesthetic is reminiscent of Disney’s Hercules. Mars has a huge body and a hairstyle that echoes the galea, a style of helmet worn by Roman soldiers. He wields a massive spear and a shield, both of which feature in his skill set and will differentiate him from other melee heroes.

Mars’ abilities seem to draw inspiration from other heroes in the game, combining different elements to create a unique toolkit.

His “Q” ability is “Spear of Mars.” A combination of Mirana’s “Sacred Arrow” and Magnus’ “Skewer,” it can be used as a ranged stun. Mars pitches his spear forward, injuring and jostling heroes enemy units in the way. The first unit it hits is skewered and pushed backward; it will be stunned if it collides with the terrain. It will hit invisible units, so this ability may be a good tool for fishing for smoked or invisible enemy heroes.

“God’s Rebuke”, Mars’ “W” ability, provides a knockback with critical damage, and a damage bonus to heroes. Combined with Spear of Mars, it provides some AoE for wave clear and team fight brawls, though the cooldowns are between ten and sixteen seconds long.

The God of War’s third ability is a passive call “Bulwark” that reduces damage taken from the front, with a smaller percentage reduced from the sides. This is similar to Bristleback’s passive “Bristleback,” except that Bristleback is protected from behind rather than in front. Getting behind Mars will be the key to killing him. It also emphasizes this hero as a stand-his-ground sort, as running away might only hasten his demise.

Mars’ ultimate ability, his “R”, is where things get interesting. “Arena of Blood” traps enemy heroes, dealing damage if they get too close to the edge of the circular arena. It prevents heroes from leaving the space, and blocks ranged attacks from entering. Currently, the Arena protects against fountain attacks, encouraging fountain diving. It also prevents attacks from towers, creating a safe zone for pushing objectives. The interaction with other hero abilities, as well as with terrain creates some interesting possibilities. For example, Dark Willow’s “Bramble Maze” can be layered within the arena to root and deal damage to trapped heroes. Her ultimate, “Terrorize,” could be used to force heroes to run into the edge of the arena, forcing them to take damage.

How Mars Could Be Played

As a strength hero, Mars seems to be damage oriented. His talent tree features buffs to strength, damage, and critical percentage on one side, with the other side emphasizing utility such as movement, armor, the length of a stun and adding healing to his ultimate healing.

While his tankiness and damage initially suggest a carry role, the utility of his stun and arena may make him useful in an offlane position as well. With the level 25 talent, his Arena can do 700 hit points of healing every sixty seconds for each ally hero who remains in the zone for the full duration.

Valve had first announced Mars in August 2018 at The International, with a short cinematic alongside Grimstroke. It’s been a long wait for fans, and now we’re sure to see the hero go through a cycle of balance patches to tweak his interactions with other heroes as well as ensure he’s neither overpowered nor too weak to be drafted. While it might be thematically appropriate for Mars to stomp over his opponents, it would be upsetting if he were so strong that he was a must-pick or -ban hero for very long.