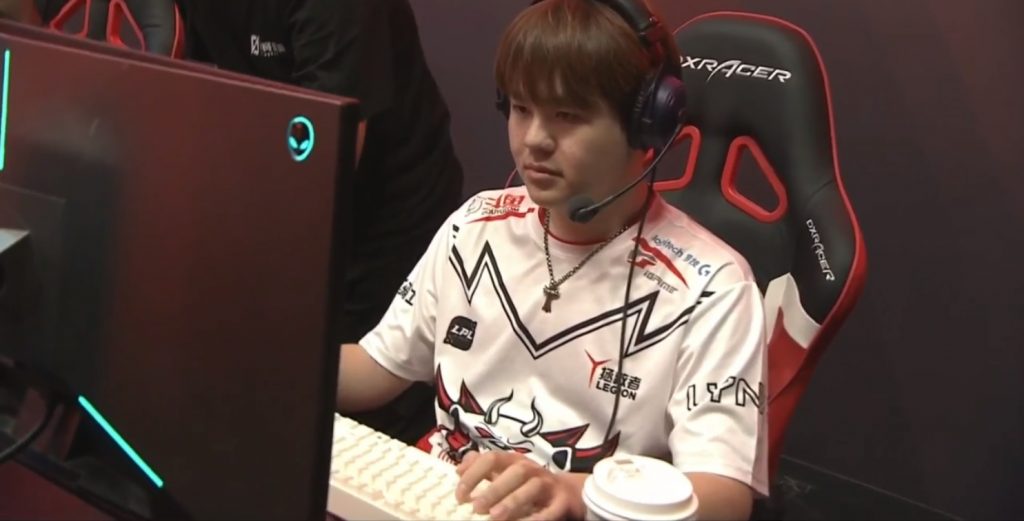 JD Gaming need to light a fire under themselves for the rest of the LPL Season. (Image via LPL / Twitch)

We’ve wrapped up week six of the LoL Pro League (LPL) 2019 Summer Season. The Spring Finalists are trending in opposite directions, as Invictus Gaming continues to climb, while JD Gaming have run into yet another cold streak. Let’s look at where things stand so far in the LPL Summer Season by looking at the top storylines so far in China.

No team in the world can match hot and cold streaks of JD Gaming. They lost their last three matches of the Spring Season before ripping off three straight playoff series wins to make the Spring Finals. They then opened the Summer Season by losing three straight, then winning three straight. At Rift Rivals 2019, JD Gaming won their matches against Dashing Buffalo and Flash Wolves, but lost both LCK matchups to Griffin and DAMWON Gaming. Those losses carried over to week six in losses to Team WE and Top Esports.

Once again, JD Gaming are tinkering with their jungle position during the season. Both Sung “Flawless” Yeon-jun and Đỗ “Levi” Duy Khánh competed for playing time in the Spring, with Flawless eventually winning out and Levi returning to GAM Esports. Now Griffin trainee Seo “Kanavi” Jin-hyeok is getting his shot at the role, though Flawless has still mixed in, including playing the entire series in a win over Bilibili Gaming.

Zeng “Yagao” Qi was a top prospect along with Zhang “Zoom” Xing-Ran, but only Zoom has taken the next step to stardom. JD Gaming have great top and bot lanes, but their mid/jungle duo is among the worst — if not the worst — of expected playoff teams. That spells trouble when that synergy has traditionally been the most important in League of Legends, specifically in faster paced metas.

JD Gaming has no easy solution to upgrade those roles, so they will just need Yagao and one of the junglers to play better. Flawless came on at the end of the Spring Season, perhaps pushed by the threat of Levi, so JD Gaming may be trying to light a fire under Flawless by giving Kanavi some play time. Yagao needs to live up to his promise if JD Gaming want to make another run at the LPL Finals.

JD Gaming have a couple of winnable games upcoming on their schedule. Their next match will be against 15th place Dominus Esports, followed by an important match against 9th place Victory Five. Victory Five is one spot and half a game ahead of JD Gaming in the standings.

Dai “Cube” Yi got called up to the big leagues on Monday, debuting in the LPL on his 17th birthday. His present? A matchup with Kang “TheShy” Seung-lok.

Cube is a carry oriented top laner who had crushed LDL competition, so it was no surprise that winless Vici Gaming handed him the keys to a carry in his debut. Though he was relatively quiet in Vici’s game 1 loss, Cube popped off in their game 2 win. Li “Aix” Yang and Chen “Jay” Bo roamed top twice in a row to get him started, but Cube took it from there.

A 4v4 skirmish top lane got turned around by Cube’s flash-engage on Aatrox, allowing Vici to secure four kills for none and blow the game open. Invictus Gaming then tried to make a play on Cube out of desperation at 20 minutes, but Cube was up to the 2v1. Using his turret and deft moves, Cube was one auto attack away from taking down both TheShy and Gao “Ning” Zhen-Ning by himself.

Vici Gaming would go on to lose game 3 of the series, but their games were certainly more exciting with Cube in top lane. Cube and Vici Gaming will have a match against 14th place Oh My God to try to pick up their first win of the season.

CAN TEAM WE MAKE ANOTHER SECOND HALF RUN?

Team WE began the week 1-6, well out of playoff contention with a matchup versus Spring Finalist JD Gaming to start the second half of the season. A tough game 1 loss looked like more of the same for the beleaguered squad.

But then came a ray of hope in a season of darkness. Team WE ripped off consecutive wins to beat JD Gaming and later overcame another 0-1 deficit to Dominus Esports for a 2-0 week.

Jin “Mystic” Seong-jun was outstanding, playing both lane dominant and scaling champions to perfection. Su “Xiye” Han-Wei has been oft-maligned, but he showed enough ability on Qiyana and other AD mid champions to warrant cautious optimism going forward. Team WE has relegated Kim “Poss” Min-cheol to tank duty — meaning Sion — but there’s no shame in that for Poss when the team is playing well and you can soak pressure while taking little resources.

Team WE have remained committed to their starting roster this season despite the poor start.     Ke “957” Chang-Yu and Zhao “Jiumeng” Jia-Hao earned a start apiece, but otherwise the same lineup that went on a tear late in the Spring Season has gotten a chance to right the ship in the Summer.

Team WE have tough matches against Bilibili Gaming and Invictus Gaming in their next two, but the schedule lines up nicely for them to finish strong. Team WE play Vici Gaming, LGD Gaming, Rogue Warriors, and Victory Five to close the season. Those four are a combined 8-22 and none are among the top eight in the league.

Saturday, July 20: Royal Never Give Up versus EDward Gaming

The third and fourth place teams square off in an important match for playoff positioning. EDG expect to have the advantage in mid lane with Lee “Scout” Ye-chan, but RNG should be favored in the other positions. EDG could look to bring Zhao “Jiejie” Li-Jie top early and often, preying on RNG’s proclivity to leave Xie “Langx” Zhen-Ying on an island.

This should be the most exciting matchup of the season so far. FunPlus Phoenix are once again undefeated deep into the regular season and looking like one of the best teams in the world. Invictus Gaming are back to full strength with the return of Song “Rookie” Eui-jin from leave. His matchup with Kim “Doinb” Tae-sang promises to be explosive.

LNG Esports need a signature win to prove that they belong among the LPL elite after a very mediocre run of games. Top Esports have beaten every team they’ve played besides Invictus Gaming, but still feel like they’re in second place courtesy of a light early schedule. Li “Flandre” Xuan-Jun versus Bai “369” Jia-Hao will be the matchup to watch in this one.