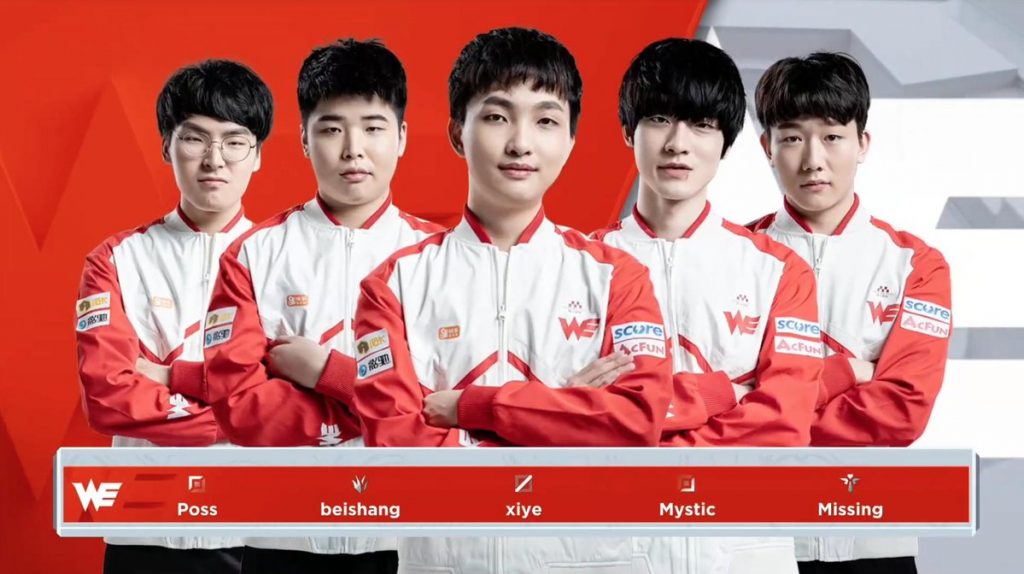 Team WE had little buzz heading into 2019 but they have shown they could be a surprise contender.

Eight weeks are down in the 2019 LPL Spring Split. FunPlus Phoenix and Topsports Gaming are fighting for the top spot, while Snake Esports, Rogue Warriors, Oh My God, and Vici Gaming are eliminated from playoff contention. We look back at the match results, top story-lines, best plays, and standout individual performances from the past week in China.

Team WE Emerging As A Dark Horse

For one of the oldest and most decorated organizations in LPL history, Team WE had little buzz heading into 2019. They were coming off a 6-13 record in the 2018 Summer Split, and though they added players to the roster, none were enough to get LPL fans excited about their 2019 prospects.

The season started about as expected. Team WE lost both matches 0-2 in their opening to SinoDragon Gaming and Suning. An upset win over struggling EDward Gaming was exciting but quickly dampened by a 0-2 loss to FunPlus Phoenix.

A Game 1 loss to OMG may end up being the turning point in the season. Team WE substituted Jiang “beishang” Zhi-Peng in for Zhou “Magic” Jun-Xuan and won the next two games to beat OMG. Since the addition of beishang, Team WE have gone 10-4 in-game record, losing only to Royal Never Give Up, Invictus Gaming, and a game to Bilibili Gaming.

That series was a crucial one as both Team WE and Bilibili Gaming were getting hot at the same time. Both had played similarly to Hanwha Life Esports in the LCK — win against the non-playoff teams, lose to the playoff teams. Their matchup would provide an answer to which of these teams needed to be taken seriously as a threat in the playoffs.

Team We had the lead for almost the entirety of Game 1. Though they never stretched the lead past 3k, they should not have needed to with the late game scaling of Gangplank and Jinx on their team. Unfortunately for them, BLD out-maneuvered Team WE by taking Baron while WE thought they could pick up a free infernal drake. By the time WE made it over to the pit, BLG had secured Baron and picked up 4 kills to 0 off the fight. They ended the game only a minute later as Team WE fell apart.

Team WE makes a surprise appearance in the playoffs contention! pic.twitter.com/gYSWuB8uyB

Despite that lapse in late-game shot calling in Game 1, Team WE persevered in the series. In fact, it was Team WE who had to overcome a large deficit to win Game 2. Down 8k gold to a sieging BLG with double infernals, Team WE found the fight to turn the game around. Beishang’s Rek’Sai flashed onto BLG’s back-line while Kim “Poss” Min-cheol’s Poppy knocked Gangplank and Gragas out of the fight. With the numbers advantage Team WE picked up four kills for one and crucially secured an infernal drake of their own. Now able to win fights, Team WE could take Game 2 in 40 minutes.

BLG had the better of the early play in Game 3, securing early mountain and infernal drakes. But Team WE fought back at 26 minutes. Lou “Missing” Yun-Feng’s Alistar found a three-man knock-up onto a sieging BLG mid lane, leading to a 3-kills-to-0 fight victory for WE and mid lane turret.

Team WE were not content with the turret, falling back to force onto Baron. They secured it quickly with the completed Blade of the Ruined King and Guinsoo’s Rageblade on Jin “Mystic” Seong-jun’s Vayne. BLG tried to take the 4v5 fight with the low health bars of Team WE, but WE turned it around for a 3-kills-to-1 exchange and grew their gold lead to 3k.

Team WE systematically closed the game from there, taking turrets and extending their gold lead to where BLG could no longer take fights. WE’s top side of the map of Poss, beishang, and Su “xiye” Han-Wei all finished deathless in the 14 kills to 3 win.

A 2-0 win over Victory Five later in the week brought Team WE their first winning record of the season at 6-5. They are now firmly in the playoff picture and have games remaining against the already eliminated Vici Gaming and Rogue Warriors. They have now overtaken Bilibili Gaming as the new dark horse candidate in the LPL though they still have to be careful. Because of their poor 12-13 game score, Team WE are vulnerable tiebreaker scenarios. They will have to earn their way there first, but Team WE could make noise in the LPL playoffs.

On the other side, it was a disappointing week for Bilibili Gaming. They made it all the way to 7-2 on the season but played a very soft schedule to get there. Losses to Team WE and Royal Never Give Up show they aren’t quite in the upper echelon of the LPL yet though they managed to win a game in each series. They have tough tests the rest of the season against EDward Gaming, FunPlus Phoenix, Invictus Gaming, and Topsports Gaming.

Back-to-back losses to Royal Never Give Up and Topsports Gaming left FunPlus Phoenix looking vulnerable. Games against middle-of-the-pack EDward Gaming and SinoDragon Gaming offered FPX the chance to right the ship or show cause for real concern. FPX didn’t make it easy, but they bounced back to win both series against EDG and SinoDragon 2-1.

Their first game against EDG could have given FPX reason to crumble. Jeon “Ray” Ji-won’s Viktor had a field day against Kim “GimGoon” Han-saem’s Poppy, finishing with a double Flame Horizon — 436 CS to 233 — in EDG’s 45-minute win. FPX just didn’t have the tools to get onto Viktor or Hu “iBoy” Xian-Zhao’s Ezreal in the late game.

The first three teams to qualify for the 2019 #LPL Spring Split Playoffs! pic.twitter.com/1rEox9YYLL

FPX then sandwiched a loss in between two dominant wins over SinoDragon Gaming. They finished their Game 1 win at a speedrun-like 23 minutes, conceding only 2 kills to SDG. SDG countered with a beefy composition in game 2, featuring Jiang “Changhong” Chang-Hong on Sion. He finished the game 6/1/7 and FPX could not tear through his armor stacking. Game 3 was a clinic by Doinb’s Kassadin. He took part in all 14 of FPX’s kills, finishing 11/1/3 and with his signature Righteous Glory pickup on a mage.

FPX have a soft schedule remaining in the regular season, playing only Bilibili Gaming, Vici Gaming, and Victory Five. If they can take care of business, they’ll take home the number one seed in the LPL Spring Split playoffs.

Royal Never Give Up Plagued By Inconsistency

One step forward for Royal Never Give Up, one step back. Their 2-1 win against Bilibili Gaming to end the week was an important one to stay in the top four in the LPL, but their 0-2 loss to Rogue Warriors was nothing short of baffling.

RNG have shown the capability to beat any team in the LPL — they were the first team to bring down FunPlus Phoenix — but they are susceptible to weaker teams as well. Strengthened by the return of Jian “Uzi” Zi-Hao to the lineup and a resurgence from Li “Xiaohu” Yuan-Hao, RNG still have a big trouble spot in top lane with Shek “AmazingJ” Wai Ho’s current form. LPL teams with good top laners can count on a win on that side of the map devoting no extra resources.

RNG’s team fighting and late-game Uzi insurance will always give them a fighting chance against any team they play. But they will have to find a new level of consistency if they want to challenge for the LPL title and more international success. They have big matches this week against JD Gaming and Invictus Gaming to monitor their progress.

Player of the Week: Mystic

As Team WE have ascended up the standings, so too has Mystic up the ladder of LPL ADCs. He had an incredible series in their matchup with Bilibili Gaming, finishing 19/7/14 for the series on Jinx, Ashe, and Vayne. He followed that up with a 13/2/13 performance on Ashe in Game 1 against Victory Five before a 1/1/1 showing on Ezreal in the weird 3-kills-to-7 win in Game 2.

Mystic may not have the KDA numbers of other ADCs in the LPL, but his kill and gold share tells the story of his importance to Team WE. Mystic is first in both categories among ADCs, holding an almost 4% lead in kill share over 2nd place. Team WE give him the gold and expect him to carry, and Mystic has been doing just that of late. If Team WE can continue their hot streak and make it into the playoffs, Mystic will be one of the top names to watch.