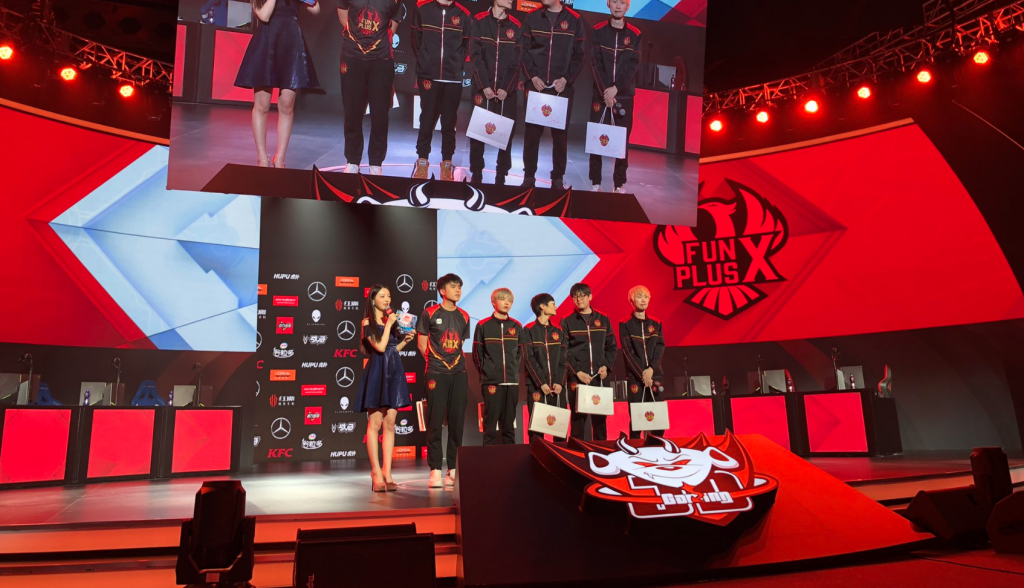 We look back at the match results, top storylines, best plays, and standout individual performances from the past week in the LPL.

Three weeks are down in the 2019 LPL Spring Split. FunPlus Phoenix have risen to the top of the standings, while LGD Gaming are bringing up the rear. We take a look back at the match results, top storylines, best plays, and standout individual performances from the past week in China.

The battle for first place in China was a back-and-forth three-game affair, but it also comes with an asterisk. Maple did not play in the first two games and H4cker did not play at all in the series. It’s rumored that they were held out because they were sick, but obviously, Maple was well enough to return for the deciding game three.

Looking at the series, though, it’s very hard to say that Suning Gaming were handicapped individually without their starting members. Mid laner Angel went 5/0/9 on Zoe in game 1, then started 6/0/1 on Leblanc in game 2, including picking up 3 kills before 11 minutes. WeiWei was a very active ganker, replicating H4cker’s playstyle very well. He finished game 1 at 7/2/5 on Kha’Zix, before going 5/6/10 on Xin Zhao and 3/2/0 on Kayn in their losses. Angel and WeiWei individually played well enough for Suning to win.

Macro-wise, there were some concerns, especially regarding Angel. As mentioned before, he was fed kills early and often in game 2, comprising the majority of the Suning early gold lead. However, he was caught out just before 20 minutes on an overzealous dive and FunPlus Phoenix used his death to force Baron. FPX lost 4 players for 2 of SN’s, but they secured Baron and were able to stall out the game.

After FPX were able to secure another Baron, Angel was again caught out, this time allowing FPX to push and end the game. In his defense, playing Leblanc into Aatrox, Elise, Sion, Kai’Sa, and Alistar is very hard later in the game. The problem is that the game should have never gotten to that point. Suning could have played for picks with Angel through the mid-game, but instead Angel himself got picked at the worst times.

WeiWei had no clear teamplay mistakes, but that doesn’t mean that H4cker’s absence wasn’t a factor. Besides the obvious comfort fit of playing with new players, H4cker controls the flow of the game for Suning Gaming and is often a main form of engage for the team. WeiWei played more of an assassin role for the team, something the team may have practiced less.

This still should not take away from the accomplishments of FunPlus Phoenix. They bounced back from a rough game 1 and large game 2 deficit to take down an undefeated team. FPX ran several risky Baron plays, but they ran them at the correct times to make a risky play. A 50/50 Baron rush is great odds for a team when they should only win the game 25% of the time from the current game state.

Doinb continues his success in the LPL, showing he can play it all with games on Akali, Sion, and Urgot in the series. He is their rock and is in the conversation for best mid laner in the LPL. He leads the LPL mid laners in kill participation and gold earned per game and sits in the top 5 for KDA at 4.83.

There was no English broadcast for this series so fans may have missed it, but this was a very concerning loss for EDward Gaming.

The series opened up ominously for EDG. Magic’s Gragas ganked through top lane at 5 minutes into game 1, setting up the kill on Ray’s Ryze for Poss’ Irelia with a perfect E Body Slam into flash. Haro’s Elise tried to salvage the situation by flashing onto Magic, but missed her Q Venomous Bite execute on a minion and died to give Poss a double kill.

EDG were then wiped at a Rift Herald fight just after 11 minutes. EDG funneled in and were destroyed by the combo of Gragas, Galio, and Thresh crowd controlling them while Poss and Mystic’s Vayne cleaned them up.

EDG fought back by springing traps for Mystic in side lanes, preying on his overeagerness to push out waves alone.

However, giving Poss so many kills early was too much to overcome. He and Mystic overcame a 2v3 situation at 30 minutes and finished it healthy enough to duo Baron. The game stalled out for a while, but the late game damage of Irelia and Vayne proved too much for EDG to handle.

The second game was a stomp. Team WE had the early lead from taking turret plates and holding small CS leads.

Holding a 5k gold lead at 19 minutes, WE caught EDG out mid lane, picking up 2 kills, their final outer tower, and transitioned it into a drake. EDG could not wrestle back vision control of the map and conceded Baron without contest.

One fight bottom lane later and it was over. Poss’ Urgot had a great E Disdain flash onto iBoy’s Lucian to catch him out and WE were able to end the game off the 4 to 2 kill team fight win.

EDward Gaming were out laned, out moved, and out drafted in the series against the previously winless Team WE squad. The loss of NoFe cannot be understated after how disjointed EDG has looked so far in 2019.

Meanwhile, for Team WE, the lineup of Poss, Magic, xiye, Mystic, and Missing have earned some more time playing together off the upset win. Poss and Magic looked very coordinated playing together, and xiye more than held his own against Scout in the mid lane. Missing and Mystic have gotten every start for WE and that shouldn’t change after they handled iBoy and Meiko this week.

Snake Esports actually had the early lead in both games. SofM and Mala roamed on Ning to pick up First Blood, TheShy was visited often in top lane to try to snowball Flandre in the Aatrox vs Urgot matchup, and Asura and Maestro picked up a 2v2 kill in lane on JackeyLove in game 1.

Unfortunately, by making all of those plays, SS lost the first two infernal drakes of the game. SS then seemed desperate to force plays to accelerate the game away from IG’s potential scaling, but all that did was allow IG to pick up kills to even out the gold deficit. By 20 minutes, the gold was again even and IG had the strong scaling advantage.

Baolan found incredible Rakan engages to force the fights for IG, and that was it for game 1.

Once again SS had a great early plan in game 2. SofM’s Aatrox came bot at level 3 to dive JackeyLove and Baolan, and SS were able to pick up both and deny a large minion wave while only losing Alistar.

IG fought back with pressure from Ning’s signature Camille. He formed a roaming gank squad with Baolan’s Rakan to find kills across the solo lanes after bot turret fell early. SS still kept up the early lead through 20 minutes but were not able to widen the gold gap like they needed to during that time.

IG won the big mid-game fight as usual, took Baron, and suddenly the game was over. IG are still too good when they are given any sort of opening back into the game, though Snake Esports were impressive in winning the early game twice against some of the most feared laners in the world.

Player of the Week: Lwx

We may need the caveat that FunPlus Phoenix beat Suning without 2 of their starters, but that does not apply to Lwx, as both SwordArT and Smlz were active. Both of FPX’s wins were a product of his elite play. Lwx hard carried game 2 with the game-winning quadrakill to cap an 18/5/2 performance on Kai’Sa (the rest of his team had 7 kills combined). In game 3 he sniped away an infernal drake from WeiWei with a Varus Q Piercing Arrow and finished a deathless 4/0/7.

It was a great performance for Lwx in a season full of them. He ranks 4th among LPL ADCs with a 5.89 KDA, 1st in gold per minute at 476, 5th with 71.6% kill participation, 2nd with a 39.2% kill share, and 2nd with a 24.8% gold share. He’s getting the gold on FunPlus Phoenix and using it to great effect in elevating them to first place in the LPL.