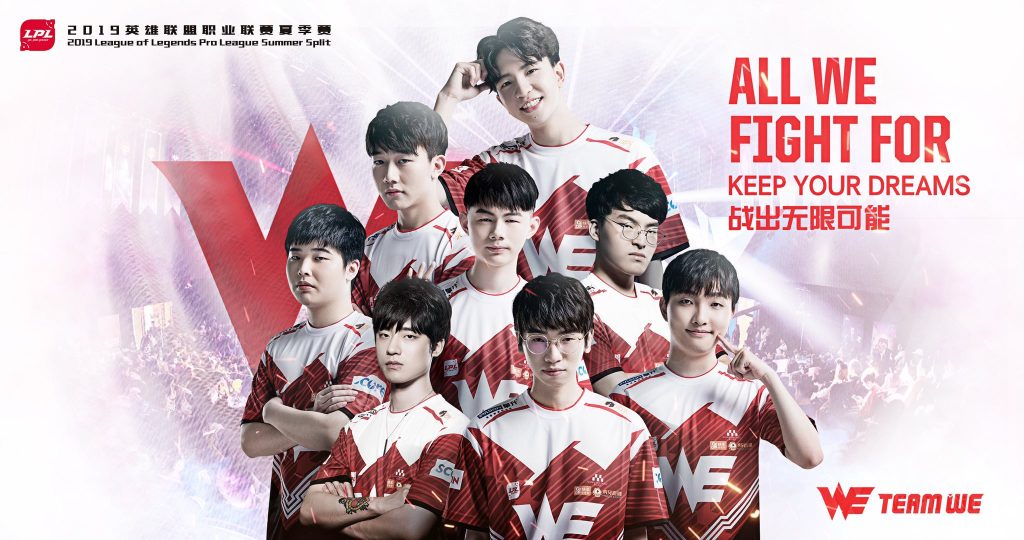 Could Team WE move up the ladder late in the LPL Summer 2019 Season? (Image via Team WE)

We’ve wrapped up week eight of the LoL Pro League (LPL) 2019 Summer Season. FunPlus Phoenix are the first team to lock up a playoff spot after 2-0 wins over EDward Gaming and LNG Esports, while Vici Gaming have been eliminated from contention following losses to Bilibili Gaming and Team WE. Let’s look at where things stand so far in the 2019  LPL Summer Season by looking at the top storylines so far in China.

TEAM WE PRIMED FOR ANOTHER SECOND HALF RUN?

Coming off 9-10 and 6-13 regular-season records in the LPL in 2018, Team WE did not have high expectations coming into 2019. They didn’t have much reason for optimism by starting the 2019 Spring Season with a  1-3 recorded. The team rebounded in a big way, winning nine of their next 11 matches to finish the regular season 10-5 — good for fifth place.

Despite a first-round exit against eventual finalist JDG Gaming, expectations were markedly higher entering the Summer Season. Team WE kept their lineup together, expecting the team to progress after a promising Spring Season. Instead, Team WE tanked to start the season. Even with a tough schedule, Team WE were winless and tied for last place in the LPL after week 3and were still just 1-6 after week 5.

Team WE then won two of their next three games ahead of a match against Invictus Gaming to end week eight. Team WE lost game one after curiously starting Zhao “Jiumeng” Jia-Hao over star ADC Jin “Mystic” Seong-jun. Jiumeng and Lou “Missing” Yun-Feng had a tough time against iG’s bot lane. Team WE looked to be on their way to clinching a losing season.

The insertion of Mystic back into the lineup in game two breathed life back into Team WE—though Gao “Ning” Zhen-Ning having one of the worst jungling performances in LPL history didn’t hurt. Jiang “Beishang” Zhi-Peng’s 10/2/8 Olaf ran over Invictus Gaming to force a game three. Mystic took matters from there, posting an 8/3/7 score on Sivir and giving Team WE their signature win in the Summer Season.

Team WE followed that upset up with a 2-0 win over Vici Gaming to now sit at 5-7, good for tenth place in an eight-team playoff field. 9-22 is the combined record of their final three opponents — LGD Gaming, Rogue Warriors and Victory Five. Team WE can easily run the table the rest of the way to find themselves at 8-7 and with a good shot at the playoffs. They may once again be the team that nobody wants to face in the opening round of the LPL playoffs.

There was no hangover effect for FunPlus Phoenix after a close 2-1 loss to Invictus Gaming ruined their bid for a perfect season. FPX picked up clean 2-0 wins over Oh My God, EDward Gaming and LNG Esports to move to 11-1 on the season and become the first team in the LPL to clinch a playoff spot.

The work won’t stop there for FPX as they try to secure one of the top two spots and a bye to the Summer Semifinals. Royal Never Give Up (9-1) and Top Esports (9-2) are their closest competition, but FunPlus Phoenix holds the edge in record and already won their head-to-head matchup with RNG in week 4.

Mid laner Kim “Doinb” Tae-sang is once again putting together an MVP campaign for FPX. He ranks near the top of the LPL among mid laners in KDA – 5.20 (2nd), CS per minute – 8.75 (2nd), and gold per minute – 439 (2nd). He also has one of the most diverse champion pools, constantly innovating builds — from his Righteous Glory Ryze to his AP Nautilus.

FPX has games against Suning and Dominus Esports left before they close the LPL season against Top Esports in a game that could determine which team will be forced to play in the playoff quarterfinals.

ROYAL NEVER GIVE UP CONTINUE TO IMPRESS

Another week, another 2-0 performance from the previous kings of the LPL. Royal Never Give Up waltzed past slumping LNG Esports and the resurgent Suning to keep pace with FunPlus Phoenix atop the LPL standings.

There were times earlier in the season that RNG were struggling to integrate new pickup Xie “Langx” Zhen-Ying, but RNG have been better about enabling him to pick and thrive on carries in recent weeks. Langx had a combined 10/2/7 K/D/A on Vladimir and Gangplank against LNG Esports served his purpose in two Camille games against his former team Suning.

The biggest bright spot for RNG on the season is Li “Xiaohu” Yuan-Hao’s return to form in the mid lane. Xiaohu went from arguably RNG’s weakest link to one of the best mids in the LPL, currently sporting the top KDA among mid laners at 6.72. His 73.8% kill participation is also tops among the league, underscoring how important he has been to the team fighting style RNG loves to play.

Of course, the star carry of the team has been and will remain ADC Jian “Uzi” Zi-Hao. He died only three times in his four games over the past week, piloting a 10/1/8 Ezreal in his best performance against LNG. As dominant as RNG’s run was in 2018, one of League of Legends’ most decorated players of all time is still in search of his first Worlds title. This roster, on paper, is as talented as any he has been a part of, including 2018.

Royal Never Give Up have tough games against Top Esports, Invictus Gaming, and JD Gaming to close the season. They would like to stay ahead of Top Esports or pull ahead of first-place FunPlus Phoenix to secure a bye to the Summer Semifinals.

Saturday, August 3: Royal Never Give Up versus Top Esports

The winner of this matchup will be in second place in the LPL at the end of week 9 and in command of the second playoff bye to the Semifinals. Xiaohu has been playing inspired League of Legends this season, but Zhuo “Knight” Ding leads the LPL mid laners in most statistical categories and is carrying his team almost single-handedly to their lofty ranking. Uzi should be able to take advantage of whatever bot lane combination Top Esports uses.

This is a matchup between 7-4 teams who look to be fighting for the fourth seed and a bye to the quarterfinals in the Summer Playoffs. Bilibili Gaming were in the playoff hunt right until the end in Spring, fading away as the season came to a close. They have climbed all the way to fourth in the Summer and will want to avoid another nosedive to end their season. Invictus Gaming once again showcased their inconsistency with a loss to Team WE.

Both of these teams were in playoff position as little as two weeks ago, but have hit hard times and look to be fading at the wrong time. LNG Esports are coming off a brutal stretch of games against Top Esports, Royal Never Give Up, and FunPlus Phoenix and need a win to stay in the picture. Victory Five have winnable games against Dominus Esports and Team WE to close the season, but they’ll have to win out to have any realistic hope to make the playoffs.