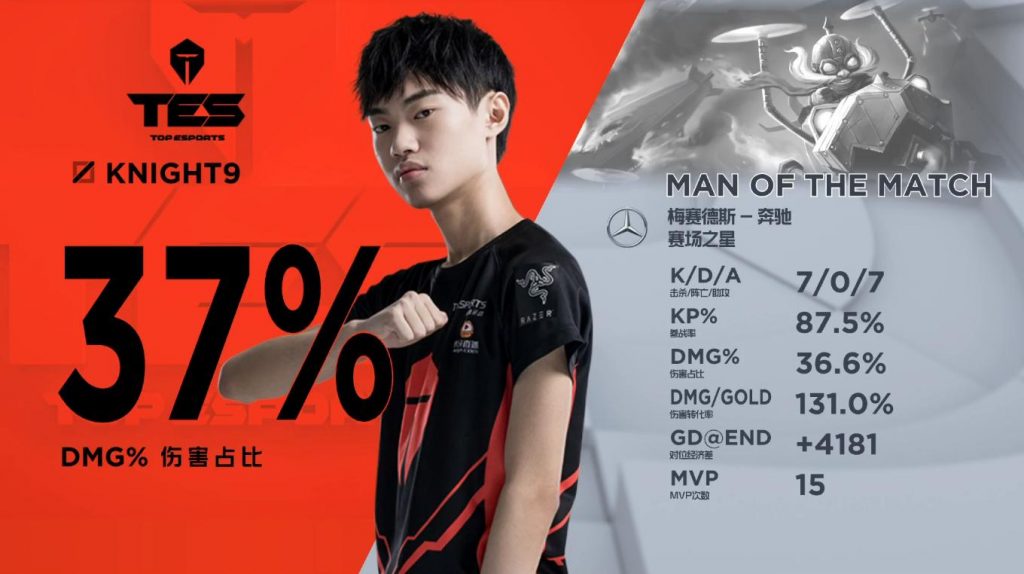 We’ve wrapped up week ten of the LoL Pro League (LPL) 2019 Summer Season. Several top teams made big roster changes, while Zhuo “Knight9” Ding staked his claim for Summer Season MVP in a big way against EDward Gaming. Let’s look at where things stand so far in the 2019 LPL Summer Season by looking at the top storylines in China.

Zhuo “Knight9” Ding all but locked up the Summer Season MVP award with another dominant performance against EDward Gaming in week ten. Playing against another one of the best mid laners in the world, Lee “Scout” Ye-chan, Knight excelled despite the poor circumstances his team put him in. EDG targeted him early and often in game one, using flash ganks twice in lane to set Knight behind early. Though Top Esports still eventually lost that game, they were able to drag the game out to over 52 minutes on the back of Knight’s Zoe poke.

EDG then started both games two and three up 5 kills to 0, making it so TES were down immediately in every game. That didn’t matter to Knight. EDG couldn’t contain his Corki, and were instead forced to watch Knight massacre their team, fight after fight, despite Scout always getting ahead early on Akali. Knight picked up a triple kill that gave Top Esports the lead and Baron in game three, ultimately becoming the game-winning play in the series.

Knight’s MVP candidacy is also borne out in his statistics among his LPL mid lane peers. Knight is first in the following categories: CS per minute (9.2), gold per minute (442), kill share (34.1%), and gold share (23.5%). He also ranks fourth in KDA (4.65), kill participation (67.8%), and unique champions played (15). Only Kim “Doinb” Tae-sang comes somewhat close to matching Knight, but it’s still clearly Knight favored when considering all categories.

Additionally, Knight has been named “Man of the Match”, or MVP in 15 of his games this season, the highest in the LPL by three. His next closest teammate, Xiong “Xx” Yu-Long, has garnered three awards. Knight has already surpassed his Spring Season leading total of 12 with another match to play. Nobody can catch Knight unless he fails to win one in his final series and Lin “Lwx” Wei-Xiang somehow wins three in his final series, which would include earning one in a loss. That seems unlikely.

Knight has a chance to make sure of that himself as Top Esports play FunPlus Phoenix in the final match of the LPL season. With Royal Never Give Up’s loss to Bilibili Gaming, Top Esports will secure a double-bye to the semifinals with a win over FPX. A loss would open the door again for RNG, pending the outcome of their final match against JD Gaming.

Some of the biggest teams in the LPL made surprising changes to their starting lineup in the past week. Invictus Gaming subbed in jungler Lu “Leyan” Jue for Gao “Ning” Zhen-Ning, Royal Never Give Up subbed in top laner Xiao “LoveZrr” Zhi for Xie “Langx” Zhen-Ying, and JD Gaming replaced Zhang “Zoom” Xing-Ran with Park “Morgan” Gi-tae, forcing them to also use Pan “Xiaohan” Han over Sung “Flawless” Yeon-jun and Seo “Kanavi” Jin-hyeok.

IG and RNG were two of the top-tier LPL teams to make roster changes in week 10.

Invictus Gaming subbing out Ning is certainly the biggest news because of their status as reigning world champions and Ning’s role in dominating the finals, but that doesn’t mean the benching wasn’t warranted. While never the model of consistency, Ning’s play has eroded this season to the point that he was solo losing games for iG when his early game didn’t go well. As high as Ning’s highs are, Leyan has been a more consistent player in his brief appearances, and iG have enough skill that they don’t need their jungler to win the game for them. They just need him to not lose it.

Royal Never Give Up did bring Langx back for game two against Bilibili Gaming, so they seem to be trying to create competition heading into the playoffs as opposed to have given up on Langx completely. A 0/7/3 performance by LoveZrr didn’t exactly help his chances. However, Langx was the prized off-season acquisition by RNG and their move to bench him this late in the season indicates they aren’t happy with how he’s fit in the team. RNG has never really made a move to play around Langx’s carry nature, instead throwing him on an island, similar to Counter Logic Gaming with Kim “Ruin” Hyeong-min. But RNG have larger aspirations than just making the World Championship — they want to win it.

An in-form Langx better helps them accomplish that goal, but RNG are once again retreating to protect-the-Uzi comps as the matches grow in importance. Langx doesn’t really fit in that role, so it will be interesting to see what RNG do from here. LoveZrr doesn’t appear to be the answer, but RNG has no options left unless they can reinvent their play style this late into the season.

Last but not least, JD Gaming has shockingly benched ZooM in favor of Morgan. As incredible as it may sound, that’s less of a knock on ZooM as it is an endorsement of Morgan’s potential. It seems like only a few months ago—because it was—that ZooM was carrying JDG to a finals appearance against Invictus Gaming. Now Morgan and Xiaohan are fighting for their playoff lives after the hole the rest of the team dug in the first half of the season. The early returns are promising, but JDG is supposed to beat Oh My God. They’ll get a better test in their final match of the season against RNG, who clearly have top lane issues of their own.

RACE FOR THE FINAL PLAYOFF SPOT

Barring a collapse by Invictus Gaming against Rogue Warriors, seven playoff spots are locked up in the LPL. FunPlus Phoenix, Top Esports, Royal Never Give Up, and Bilibili Gaming have all earned byes, while EDward Gaming and Suning are locked into the first round. That leaves LNG Esports, Team WE, and JD Gaming fighting over the presumed final spot in the playoffs.

LNG Esports hold the lead heading into their final match by virtue of their overall game record. That 17-17 mark is a half-game better than Team WE’s 17-18, despite both teams owning identical 7-7 match records. LNG also holds the head-to-head edge over Team WE, should it come down to that.

LNG Esports has a slight lead to claim a playoff spot heading into their final match.

LNG Esports faces playoff team Suning to close the season. While a tough matchup, Suning are already locked into the first round of the playoffs and can only change their seeding. They may not be motivated to field their full lineup in a game that shouldn’t change their seed, unless it ends up helping them to avoid Invictus Gaming in round one.

Team WE face the already eliminated Victory Five in their final match. They play before LNG and will be relying on a Suning win for a chance to make the playoffs. JD Gaming need to beat Royal Never Give Up and hope both Team WE and LNG Esports lose to make the playoffs. They lost their head-to-head matchups with LNG and Team WE, so JDG will also need to 2-0 their match against an RNG squad that is still trying to secure a double-bye.

Friday, August 16: JD Gaming versus Royal Never Give Up

JD Gaming needs to win to stay in the playoff race, while Royal Never Give Up needs to win to stay in the hunt for the number 2 seed and a double-bye. Both teams made changes in top lane in the past week, though for different reasons. RNG are looking for a more stable presence than Langx has provided so far this season, while JDG are going for broke in promoting a possibly even more mechanically gifted top laner than Spring sensation ZooM.

LNG Esports could find themselves already locked into playoffs before the match, but that would require losses by both Team WE and JD Gaming. Suning are not playing for a playoff spot or bye, but have been building strong momentum with their addition of Xiang “Angel” Tao to the starting lineup. LNG have struggled against the top LPL teams, so this will be their chance to prove they belong and can compete in the playoffs.

FunPlus Phoenix have already clinched a double-bye and the number one overall seed based on game and match record, so the result will be meaningless to them. Top Esports can clinch the other double-bye with a win or a loss from Royal Never Give Up. Assuming FPX starts their regular lineup, Knight versus Doinb should be the matchup of the year in the mid lane. Knight will have one final showcase match to add to his “Man of the Match” count and show why he’s deserving of the Summer MVP.