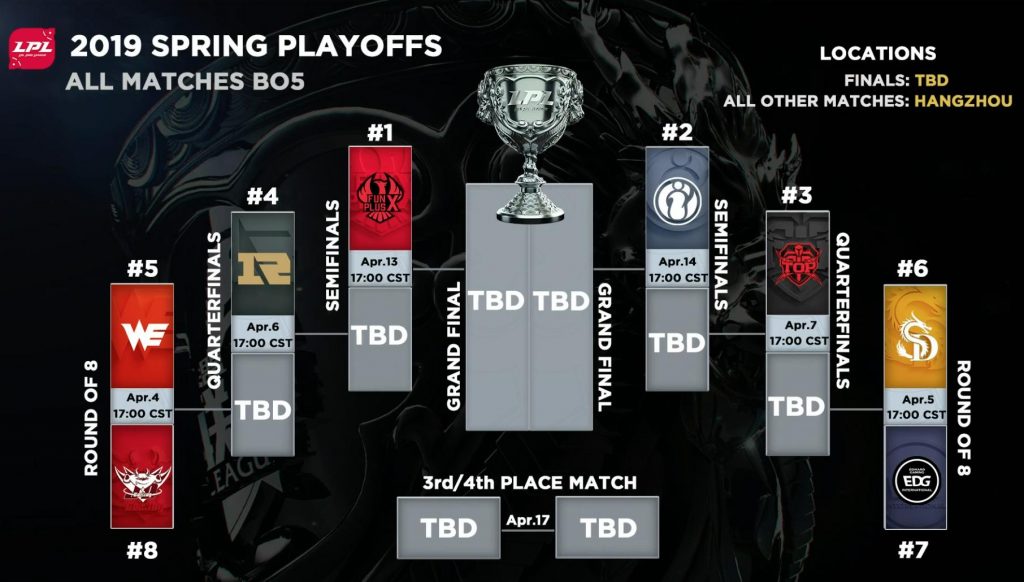 The 2019 LPL Spring Playoffs will see eight teams will compete for a ¥3,500,000 prize pool and be crowned Spring Split champions in Chongqing, China.

The 2019 LoL Pro League (LPL) Spring Playoffs kick off on April 4 and will run until April 20. Eight teams will compete for a ¥3,500,000 prize pool and be crowned Spring Split champions in Chongqing, China.

Prize money is nice, but championships are forever. The focus will be foremost on the Spring Split title, but good placings will help the teams qualify for international tournaments as well. The Spring Split champion will receive 90 championship points toward 2019 Worlds qualification, a spot in the MSI, and a spot in Rift Rivals.

The LPL receives four spots at Rift Rivals, so the top four finishers will qualify. Championship points are crucial to 2019 Worlds qualifications because, outside of the 2019 Summer Split champion, the team that has gained the most championship points throughout 2019 will automatically qualify for Worlds 2019.

The LPL will have four rounds in the playoffs; each match single elimination,best-of-five. Round one will feature fifth-seed Team WE against eighth-seed JD Gaming and sixth-seed SinoDragon Gaming versus seventh-seed EDward gaming. Fourth-seed Royal Never Give Up will take on the winner of WE vs JDG, while third-seed Topsports Gaming faces the winner between SDG and EDG.

Top seeds FunPlus Phoenix and reigning world champions Invictus Gaming will make their first appearances in the semifinals. FPX will take on the winner of the RNG series, while iG will face the winner of the TOP series. The semifinal winners will meet on Saturday, April 20 for the championship and an invite to MSI 2019.

Mark April 4th on your calendars, cause we're diving into playoffs season!

For the regular season dominance, FunPlus Phoenix and Invictus Gaming have a large leg up on their competition courtesy of their double byes. Both teams were the most consistent during the LPL season and have to enter the playoffs as the favorites.

Team WE and SinoDragon enter the playoffs as dark horse candidates with how hot they ended the season. Team WE should have an advantage over JD Gaming as JDG still struggles to find consistency in their jungle role. A trip to the semifinals is not out of the question given how Royal Never Give Up has struggled in top lane, even with the re-addition of Liu “Zz1tai” Zhi-Hao.

Topsports Gaming have the talent to beat any team in China, including Invictus Gaming. The question is whether they can maintain that high level of play to win three consecutive series. There are no easy outs or warmup matches with how deep the LPL is this year. TOP will probably require another split of seasoning before we can consider them a championship favorite.

Invictus Gaming’s experience in winning on the highest stage propels them to a 3-1 win over FunPlus Phoenix for the LPL Spring Split Championship.