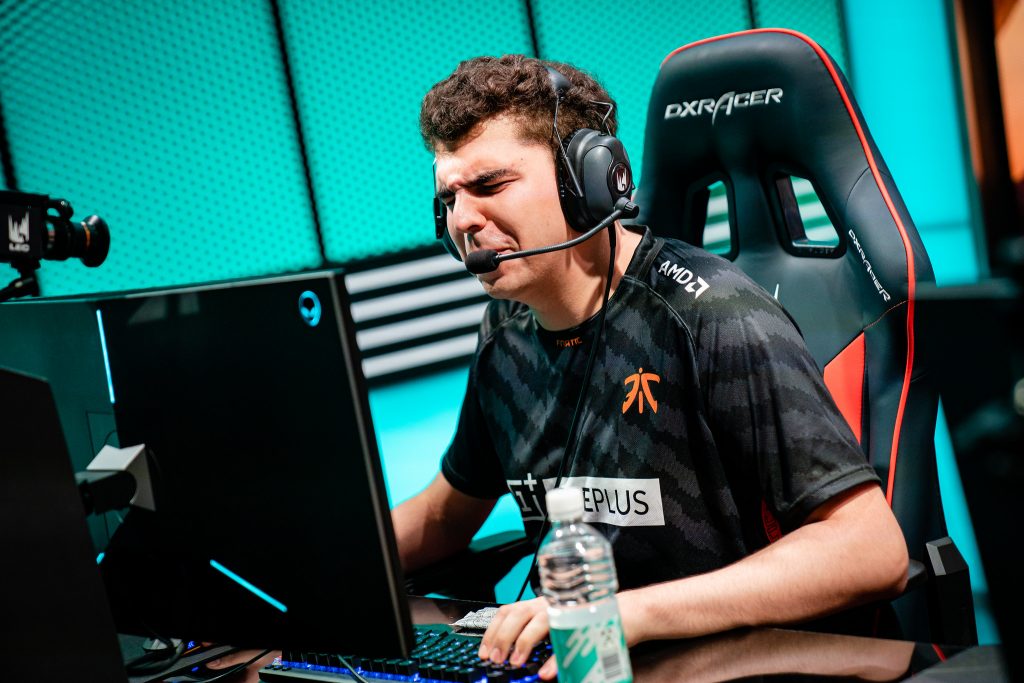 Strange picks have reigned supreme across Europe in Week 8 of the LEC. Image via Riot Games.

We saw some interesting picks in Europe this weekend. G2 Esports seemed to have topped the weird and wonderful with a Soraka solo lane. Fnatic cornered the market that same day as they put Martin “Rekkles” Larsson on Garen in the bot lane, carrying an AP-build Yuumi around on his back. We take a look at those picks, and the LEC standings, after Week 8.

With G2 constantly ramping up the whacky and wild picks in the LEC, including things the zero percent win rate Garen, and Soraka top, many were wondering if they had cornered the market on exciting pocket picks in the closing rounds of the league.

As it turns out, Fnatic’s bot laner Rekkles, who has come under fire in the past for his small champion pool, is just as happy to play along with the meta-breaking games. The difference? Martin “Wunder” Hansen failed on Garen. Rekkles, armed with a Yuumi in tow, succeeded.

That’s really the trick of the Garen-Yuumi bot lane. While Garen is certainly a decent pick for the combo, it’s his tankiness that is vital to the build. You could sub in something like Tahm Kench or Sion and it may be just as strong. Yuumi just needs to build damage.

That’s exactly what Hylissang did in the clash with Vitality. A massive-stacked Mejai’s Soulstealer boosted the Yuumi’s damage, while Luden’s Echo, Athene’s Unholy Grail, and the components for a Rabadon’s Deathcap all boosted Hylissang over the top.

The Yuumi-inspired victory was also a key one for Fnatic. As the storied organization continues their duel with Splyce in the LEC’s Battle for the Bye, every win matters. Splyce edged Schalke and Origen to keep pace with a 2-0 weekend, and set up a massive Week 9 match.

Splyce are the real deal in Summer

For a long time, Splyce have been cursed with a Summer collapse. The team has shone brightest in Spring, before falling away into the mid-table pack when qualification to the World Championship is on the line.

The Vipers continued to prove they’re here to play in the second split of the year with another 2-0 weekend. The wins over SK Gaming and Origen kept them neck-and-neck with Fnatic in the Battle for the Bye, and set them back on track after their last mixed round.

Mid lane sensational Marek “Humanoid” Brázda continued to prove that he’s a powerful centerpiece metronome for the team, smashing through Origen on Friday with a 7/1/7 performance on Akali.

Led by Humanoid, Splyce weathered an early-game push from Origen that snapped out to a 2K gold lead. The squad then clicked into late-game mode at the 15-minute mark with a critical double kill for Andrei “Xerxe” Dragomir on jungle Qiyanna, and an earth drake.

From there, the mid-jungle duo rampaged across the map. As Qiyanna and Akali, their burst damage was near-unparalleled, and Splyce’s new favored champion combo strangled Origen out of the game in 31 minutes. Xerxe finished 3/2/10.

In their Saturday meeting against SK, organization stalwart Kasper “Kobbe” Kobberup was given a chance to carry on Xayah. Led by Tore “Norsekeren” Eilertsen on Rakan, Kobbe’s Xayah dominated teamfights to clinch Splyce’s 40-minute win.

With just a single week left in the regular season, there can be no denying Splyce has swung upwards compared to previous Summers. They now sit with a chance to take second place, hold a 1-0 record over Fnatic, and may punch their ticket straight to Athens.

Now or never for Origen

One of the worst fall-offs for teams this split has come from Spring’s second-placed team Origen. After being 3-0’d by G2 in the first split of the year’s grand final, it seemed like Origen were a rung below, but not by much.

Even worse, their Summer started off well. It wasn’t until they traveled to Rift Rivals mid-split that they began to unravel. Three wins in eight since the mid-season break shunted Origen straight down into the fight for playoffs.

This weekend went some distance to stabilizing the struggling team, however. A close 31-minute loss to Splyce marred their Week 8 run, but their bounce-back win over Excel Esports—making sure the British org couldn’t reach playoffs in the process—helped.

After struggling to find his footing in recent weeks, Jonas “Kold” Andersen was on-song against Excel with his jungle Gragas pick. He stormed through the early game on the Rabble Rouser, clinching a 6/2/8 finish in the half-hour battle.

Despite their poor run for the Danish squad, playoffs are still very much in reach. In the final round, Origen must face down two other postseason contenders in Rogue (6-10) and SK Gaming (5-11). It’s do or die for the org, and the last week is as important as it gets.

Game of the Week: Splyce vs Fnatic

While there’s plenty of playoff struggles still reigning in Europe, the Battle for the Bye is the most critical. Both Fnatic and Splyce are teetering on the edge of securing a place in Athens, and the chance to basically secure double elimination in the playoffs is vital.

Whichever team can edge the other on Friday evening should hold an advantage in the race—not just for the regular-season standings, but for a chance to challenge G2 one or two times. The second-place reward cannot be understated. This is one of the biggest games of the split.