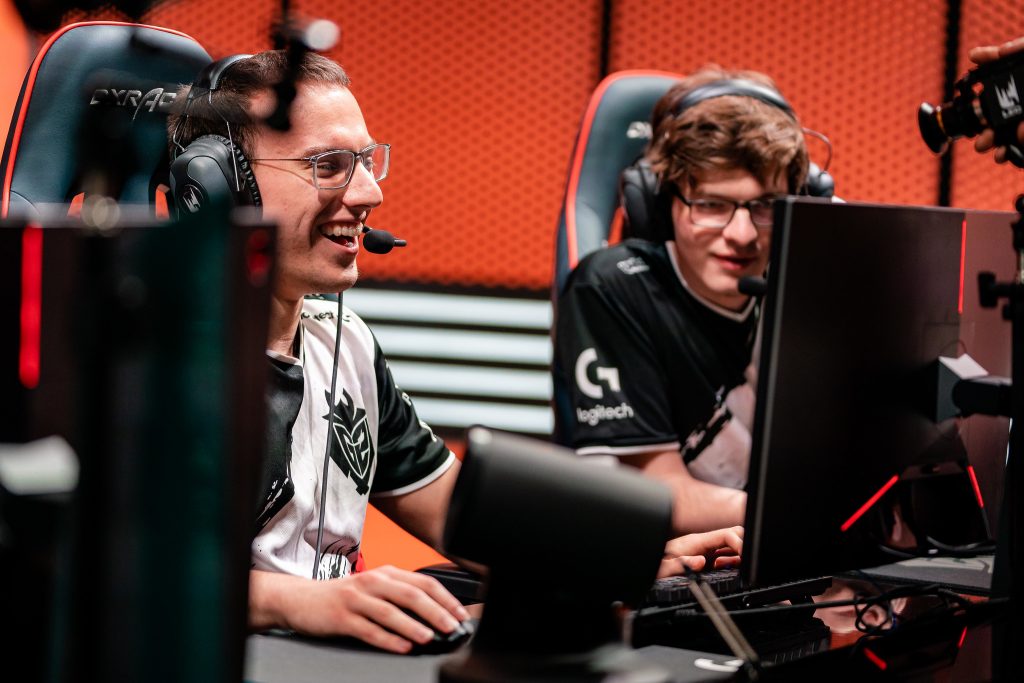 Upsets across the LEC have sparked battles in all areas of the standings, from the G2 vs Fnatic duel at the top, to a tight three-way contest at the tail-end.

We take a look at the three pressure points in the League of Legends European Championship as the postseason—and the end of the year for some—hurtles towards us after Week 7.

G2 Esports have one hand on the crown

For European fans, the treat of having two of the best teams in the world duke it out for the top spot is nothing short of amazing. Where once the Telecom Wars between SK Telecom T1 and KT Rolster reigned supreme, now all eyes turn to G2 versus Fnatic twice a split.

This time around it was G2 that claimed bragging rights in the battle, and a two-game buffer at the top of the Championship with the number of rounds left draining away. This game may have decided the title race, and established G2 as runaway favorites.

In another riveting game, G2 and Fnatic traded blows across the map in a fast-paced style. Marcin “Jankos” Jankowski squeezed top lane as Sejuani, while Mads “Broxah” Brock-Pedersen switched his focus straight to Fnatic’s bot lane.

Both junglers—each of whom have been thrown about as MVP candidates for Summer—had clear goals in mind. For Fnatic, bot laner Martin “Rekkles” Larsson was undefeated on his Karma pick. For Jankos, his solo laners were always going to be the key.

Europe’s fans were treated to 18 high-intense minutes as each team looked for supremacy across the Rift, before a botched dive mid lane for Fnatic swung the game.

From there, the contest was over. The choice hadn’t been the only thing to cost Fnatic—Hylissang’s 1/7/4 scoreline on Tahm Kench didn’t help matters—but it was a key moment in the struggle for first. G2 now holds every card.

From here, Fnatic faces a difficult race. Splyce has leveled their record with the former European champions, and G2 are disappearing into the distance. Even worse, it’s not like Fnatic are inherently poor. Their rivals are just that much better.

There’s still time, however. Fnatic has another fortnight to find out what works and unlock the puzzle of out-pacing G2. We may well see a best-of-five series between these two European giants soon, and what a pleasure it will be.

Lucas “Cabochard” Simon-Meslet was all smiles after Vitality’s 2-0 weekend. Image via Riot Games.

Just a few weeks ago, everyone was writing Team Vitality off in the race to join Europe’s postseason. A rising force in Rogue seemed to have set up a gatekeeper situation, and Origen still had their Rift Rivals hype behind them.

Vitality have cleared both hurdles after a 2-0 weekend that included the biggest scalp of them all: the pacesetters G2.

Now, there were a few elements that helped Vitality along the way. After locking in Tristana on the crowd’s behest last weekend, the defending champions decided to put Wunder on rarely-picked Garen.

It wasn’t the only reason G2 fell in 29 minutes, but the 0/4/0 “power” pick in the top lane was just short of abysmal. Wunder dealt just 1.8k damage to champions in the half-hour contest and used his Demacian Justice ultimate just once.

I would blame @PapaSmithy and @G2esports draft-actioning for forcing us to pick Garen, but honestly we just ran it down.

Hope all of you Garen ethusiasts appreciate Wunders sacrifice!

Vitality forged their own destiny in the end, however. Garen may have helped them on the path to the win, but it was Lee “Mowgli” Jae-ha that stamped his mark on the game as he set the tempo of the map on the blind monk Lee Sin.

Mowgli’s jungle tracking on Jankos harked back to the fast-paced styles Vitality first rose to prominence playing, and control of the bot lane through double kills for Amadeu “Attila” Carvalho and Jakub “Jactroll” Skurzyński sparked the French side to life.

Vitality looked back to their wild best against G2 on Friday evening. They collected 18 eliminations to G2’s five, streaked to an eventual 10.9k gold lead, and denied their opponents all but a single turret and Rift Herald in regards to objectives.

With Origen and Rogue seemingly slipping in the race for a high seed in play-offs, and FC Schalke 04 claiming their sixth 1-1 weekend in seven rounds, Vitality has patched together their write-off season and are well on the rise.

Keep a close eye on Vitality next week. With SK and Fnatic next up for the French org, there’s plenty of chances to see where the side truly is on the Rift. If the fast-paced domination of G2 is anything to go off, however, we’ve just found our fifth finals team.

Tight three-way battle at the bottom

Just as the first-place and midfield battles have heated up in the tail end of Europe’s Summer split, so too has the fight to avoid last place.

There are three teams currently locked on a 4-10 record – Excel, Misfits, and SK Gaming. With Rogue (5-9) and Origen (6-8) just above them, the season is far from over for the trio, but they have to make their move soon if they want to make a late bid for playoffs.

SK and Excel had their moments in Round 7 as they kept afloat with 1-1 weekends. Only Misfits had a winless weekend.

Excel opened the round with a strong 33-minute win over third-placed Splyce, before falling to Vitality on Saturday. Rogue beat SK, then SK beat Misfits. It was the second loss for the rabbits after they’d been rolled by Origen 25-5 in just 27 minutes on Friday.

Misfits are plummeting towards last place despite overhauling their roster mid-split. Image via Riot Games.

Europe’s seventh week may have given us a deeper insight into how the table is going to fall for the bottom three. Despite changes for Misfits, nothing’s gone right for the team. The team of young stars fell prey to SK and their new mid-laner Janik “Jenax” Bartels.

Even worse for Misfits, Excel has bounced from a horrid 1-7 record to 4-10 in just three weeks. It’s not the best place to be for the British team, but a 3-3 run has stabilised their drifting season. Even SK, who were in freefall, just broke their eight-game losing streak.

This probably wasn’t what Misfits had in mind when they stripped superstars like Nubar “Maxlore” Sarafian, Paul “sOAZ” Boyer, and Korean champion Kang “Gorilla” Beom-hyun from their roster, but it’s where they’ve placed themselves now.

With just four games left in LEC, there’s a mathematical chance for Misfits. Unfortunately for org’s fans, it’s not likely the rabbits have it in them to challenge anytime this year.

Game of the Week: Team Vitality vs Fnatic

Vitality have roared to life in the second half of Summer, and come into the penultimate weekend with a three-game win streak under their belts. On the other side of the Rift, Fnatic have dropped into second place with a 3-3 run in the past few rounds.

Nothing is for certain yet in the LEC’s standings, but if Vitality want to keep control of fifth place or higher they must clock up another 2-0 weekend sooner rather than later. Meanwhile, Fnatic will be desperate to hold on to that first-week bye in finals as Splyce nip at their heels.