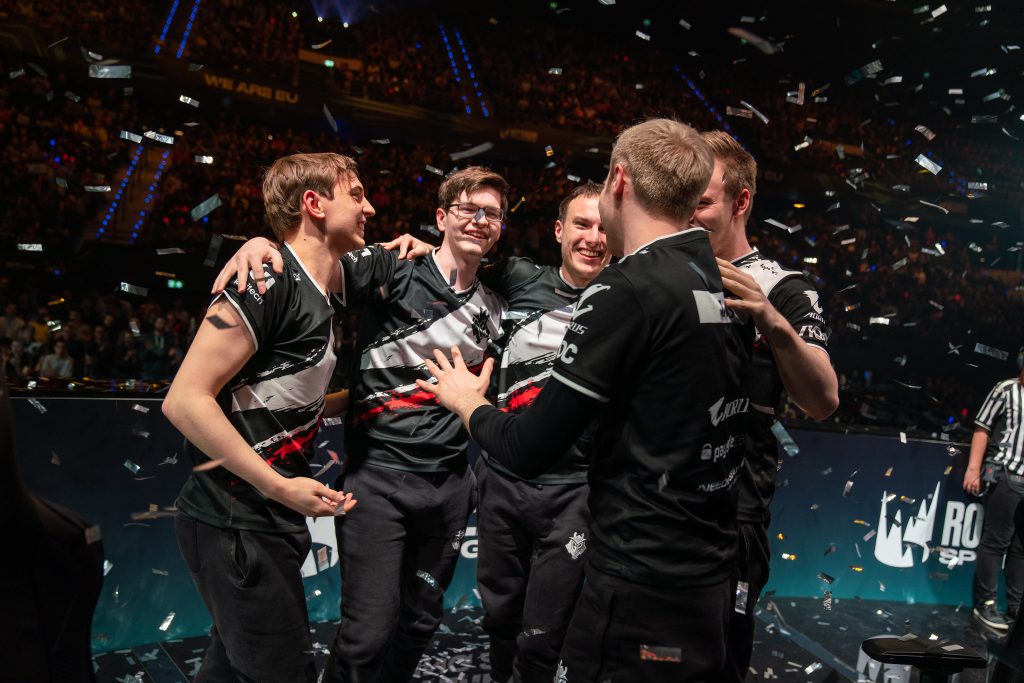 G2 Esports left no doubt who the best team in Europe is after their 3-0 stomp of Origen in the 2019 LEC Spring Split Finals in Ahoy Arena. Origen got a second shot at G2 after beating Fnatic 3-1 in the semifinals, but they didn’t fare any better in their extra opportunity. If anything, it solidified just how far ahead G2 Esports are ahead of the rest of the field in the LEC.

Origen gave Fnatic the now famed Taric and Sona bot lane duo, but they had an answer prepared. Erlend “Nukeduck” Våtevik Holm blind picked Zed in the mid lane, while Patrik “Patrik” Jírů and Alfonso “Mithy” Aguirre Rodríguez picked a Varus and Blitzcrank kill lane. As if that wasn’t enough, there would also be a Karthus ultimate from Jonas “Kold” Andersen available.

Origen got off to a fast start, invading at level one and picking up First Blood on rookie Tim “Nemesis” Lipovšek’s Sion with a nice Blitzcrank hook. Kold picked up that first kill and used it to great effect at 4:45 bot lane. His first recall allowed him to buy a Fiendish Codex, and he used that extra power to get OG’s bot lane ahead, despite Nemesis’ counter teleport.

OG’s bot lane picked up another kill 2v2 bot, finally showing the world how to capitalize on a kill lane into Sona and Taric. That bot snowball never allowed Fnatic’s composition to come online, and Origen ran away with game one. Patrik finished 6/2/3 and Origen closed it out in 32 minutes, and while the kill score of 13-9 seemed close, they were up 11-1 in turrets with an 11K gold lead.

This time Fnatic decided to give up the Taric and Sona duo to Origen, but they didn’t win the other side of the matchup either. Annie and Twitch for Zdravets “Hylissang” Iliev Galabov and Martin “Rekkles” Larsson didn’t give Fnatic enough early power to punish Patrik and Mithy, though the Twitch would get a free scaling lane.

Despite OG getting through laning phase bot, Fnatic still had a huge 7.7k gold lead 25 minutes, just based on their ability to siege and push down turrets. Kills were 9-8, but turrets were 7-1 in favor of Fnatic, including the mid inhibitor.

Instead of just taking that inhibitor and resetting, Fnatic got greedy. Nemesis’ Lissandra engaged under OG’s bot inhibitor turret and a 5v5 fight broke out. Fnatic killed Mithy, but Origen got shutdowns on both Gabriël “Bwipo” Rau and Nemesis and saved the turret.

Fnatic may have still been ahead in gold, but they could no longer win team fights. Kills were tied 10-10 at that point, but Origen would go on to pick up 15 of the final 16 kills in the game to start the series 2-0. Fnatic could not burst down any OG member, and Rekkles’ Twitch ult was nullified by Taric’s ultimate. Nukeduck’s Ryze finished 12/1/4 for OG, while Barney “Alphari” Morris’ Jarvan IV finished 3/2/17 with a game-high 26.4K damage dealt.

Game three was the first “standard” game of the series, AKA not featuring Taric and Sona or any other variation of the Frostfang bot lane, and it served Fnatic well. Mads “Broxah” Brock-Pedersen got back to his roots, diving bot lane at level three to hand Rekkles’ Vayne First Blood at three minutes.

Fnatic picked up two more kills at eight minutes when OG tried to contest the drake pit while behind and down a teleport top lane. Fnatic took several turret plates, an uncontested mountain drake, and Rekkles was ahead 82 to 42 CS on Patrik’s Ezreal only 8:30 in.

Fnatic picked up the first 10 kills of the game, before they once again dove a turret 5v5 and hand Origen a shut down. This time that wouldn’t be enough for Origen to get back in it. Fnatic re-grouped, stopped throwing, and ran over OG for the rest of the game. They won game three in 26 minutes to stay alive, finishing up 18 kills to 4. Bwipo’s Aatrox was 7/0/4 and finished with a team high 12.2K damage dealt.

We had standard compositions again in game four, but this time Origen’s bot lane were able to hold up against Fnatic. Rekkles’ Kai’Sa teleported top lane early to try in vain to save Bwipo, releasing some pressure for Origen. Mithy used his Tahm Kench ultimate well to gank Nemesis’ Lissandra early and gave Nukeduck an important kill on Sylas.

At 18 minutes, Fnatic’s proclivity to dive Origen bit them again. Origen engaged mid with Patrik’s Ashe Arrow, but Fnatic were quick to try to turn around the fight while Nukeduck had to teleport in. Mithy saved Kold’s Skarner, depositing him under OG’s mid turret with low HP, but Bwipo and Broxah chased the kill instead of peeling back to their back line. Fnatic got Kold and Mithy, but lost Broxah, Bwipo, and Hylissang with a big assist to OG’s turret. OG took a 2.3k gold lead at the conclusion of the fight.

Origen picked up a crucial infernal drake at 21 minutes to even them at one apiece. Bwipo’s Aatrox got low enough in the fight that Mithy’s Tahm Kench ultimate could corral him back into OG’s team for a kill. Hylissang walked forward afterward to try to catch Patrik’s Ashe, but instead OG turned around and killed him.Suddenly, OG had evened up the infernal drakes and now had a 5k+ gold lead.

Fnatic tried to engage on OG in their top side jungle at 25 minutes while Aphari’s Gangplank wasn’t in range, but OG tore them apart. OG picked up two kills, caught Broxah’s Rek’Sai before he could attempt a steal, and secured Baron.

With their lead, OG pushed down Fnatic’s bot and mid inhibitors and were onto the top lane inhibitor at 32:30. Fnatic could not allow all three to fall, so they were forced to engage. Rekkles looked like he had an opening on Kai’Sa, but OG quickly shut it down and shut the door on Fnatic’s Spring season. They closed out the series 16 kills to 5 in 33 minutes to advance to the Finals.

Mithy was named player of the series, finishing a combined 3/9/42 across the series. Origen, courtesy of the new LEC playoff format, now got a second shot at G2 Esports in the Finals. Fnatic’s Summer Split ended here, but they have qualified for 2019 Rift Rivals to represent Europe.

A second series between the 1 and 2 seed in Europe produced a second lopsided 3-0 result as G2 Esports ran away with the 2019 LEC Spring Split Finals.

The opener in this series was the first time we’ve seen Taric and Sona not being scooped up by either team in their initial picks. After Origen opted against it in their first rotation, G2 Esports snapped it up in their second rotation. As well as Taric and Sona scale, Origen had great scaling of their own from Nocturne, Ryze, and Varus.

Game one stayed within 1k gold for the first 27 minutes of play, meaning it was anyone’s game for the taking. G2 decided to take it for themselves at 27:23. Luka “Perkz” Perković hit a game-changing flash ultimate on Patrik’s Varus to catch him out at the Baron pit. G2 used that pick to secure the first Baron of the series and picked up two more kills on Kold and Mithy to blow it open.

OG made their last stand at 30 minutes on their bot inner turret. Alphari’s Hecarim engaged on G2 Esports, who didn’t have Taric ultimate up, but G2 were able to kite back and blow up OG. Wunder’s Irelia picked up a triple kill and G2 stormed through OG’s base. G2 finished the game in 31 minutes up 15 kills to 8. Wunder dealt a game-high 15.5K damage and finished 6/4/6.

If we learned anything from game two, it’s that G2 Esports can play whatever they want in the LEC and still win. Their choice this game was a Perkz mid funnel on Xayah, while Marcin “Jankos” Jankowski laned Morgana bot with Caps’ Pyke.

Game two was scrappy all around, but G2 Esports can’t be beaten in those kinds of games. Skirmish after skirmish went in their favor, and all told, they finished with 24 kills in under 25 minutes of game time. Caps finished 6/0/11, Perkz finished 8/0/10, and Origen had no answers for G2’s funnel strat in game two.

On match point, would G2 feel the pressure? Would Origen step up and put up their best fight of the series to keep it alive? The answer was a resounding no on both counts.

G2 absolutely slaughtered Origen in the fastest title-clenching game in LEC history. G2 took fights on multiple fronts consistently, forcing OG to play reactively and not giving them the time or space to set up and play their favored controlled type of game.

True to that prediction, G2 needed only another five minutes to push down OG’s base. OG tried to fight G2 in their bot jungle at 18 minutes, but Wunder turned a kill on Mithy’s Galio while Caps, Mikyx, and Jankos teleported into OG’s base to end the game. G2 clinched their title in a shocking 18 minutes, finishing up 21 kills to 6.

G2 top laner Wunder, criminally underrated throughout the season, was named Finals MVP after a combined 16/9/14 performance in the three-game series.

G2 Esports reclaimed their spot atop Europe with one of the most dominating LEC splits of all time. Caps’ move from Fnatic to G2 Esports was questioned, as Fnatic were coming off the most successful season of a Western team all-time, but G2 Esports have demonstrated an even higher ceiling than that Fnatic squad so far in 2019. They look to have legitimate MVP candidates in every role, and Perkz will only grow as he gets more time to adjust to his new role.

Even with the defeat, Origen had an incredibly successful re-entry into the LEC in their first split back. Mithy bounced back after a down year on TSM, Nukeduck once again looks to be in the top tier of European mid laners, and the future will be bright for the new team. They will be one of the LEC representatives at 2019 Rift Rivals, along with G2 Esports and Fnatic.

G2 Esports will be Europe’s lone representative at the Mid-Season Invitational, and they won’t be there just for show. With their star power, they will be expected to compete for the title, even against giants like SK Telecom T1. G2 have the talent to pull it off.