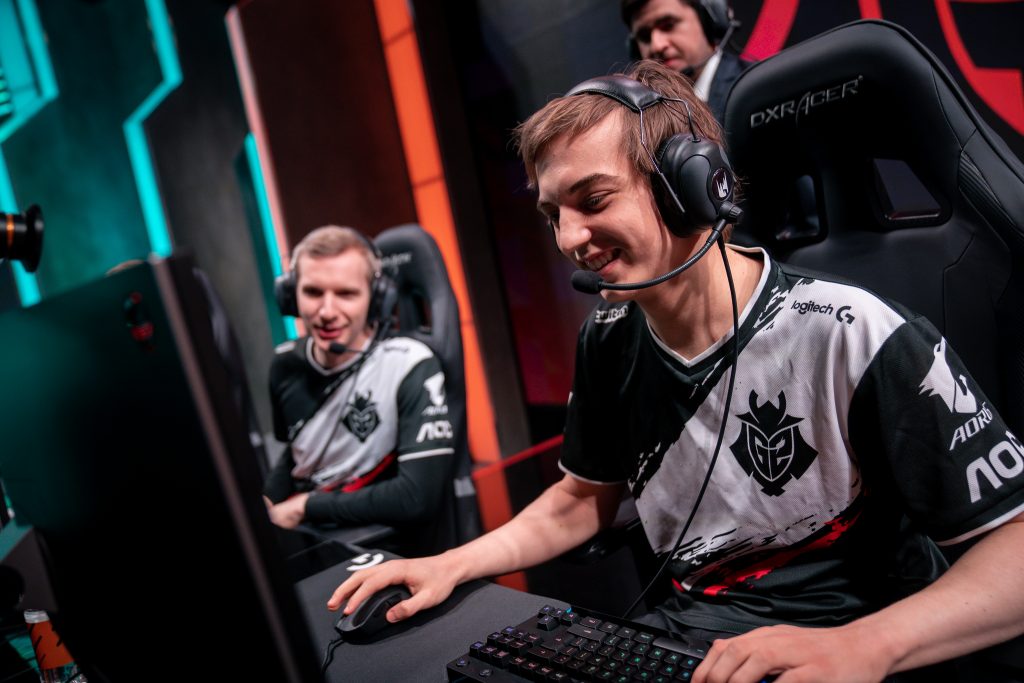 Week 3 of the 2019 LEC Spring Split is in the books, with G2 Esports still in sole possession of first place and Rogue the last team searching for a win.

Week 3 of the 2019 LEC Spring Split is in the books, with G2 Esports still in sole possession of first place and Rogue the last team searching for a win. We take a look back at the match results, top storylines, best plays, and standout individual performances from the past week in Europe.

G2 Esports were dominant again in Week 3, but not in the same way we’ve come to expect. Lane dominance was not the theme for this week, as both SK Gaming and Splyce were able to pick up early leads in their matches. G2 Esports used this week to show off their mid game team fighting, and it was good.

SK Gaming picked up First Blood on G2 when Pirean’s Leblanc outplayed an early Jankos Sejuani gank, solo killing Caps’ Urgot. Werlyb had good Kennen ultimates on teleport flanks early, generating a 1.8k gold lead at 13 minutes for SK. As the teams grouped, however, G2 had full control of the game. Sejuani and Urgot were too tanky for the quick burst of SK’s Kennen and Leblanc, while Wunder’s Viktor and Perkz’ Ezreal provided the sustained damage for G2.

Splyce crushed the top half of the map in their game against G2. Xerxe started 3/0/0 on Aatrox very quickly, while Caps was down 35 CS at 15 minutes due to the pressure from Aatrox and Ryze in lane. Fortunately for G2, Perkz and Mikyx were crushing their lane in return, leaving Splyce with a slight gold lead of 1.2k at 18 minutes.

G2 took the initiative to litter Splyce’s top side with vision, and the move paid off. G2 found consecutive picks in Splyce’s red side jungle, giving them control of the game. A fight top side again saw G2 score an ace at 22 minutes. Splyce would go on to fight back but were always chasing the game from then on, eventually succumbing to G2 Esports in 40 minutes.

FC Schalke 04 also played Splyce in Week 3, but their win was more straightforward. Schalke had lane priority in all three lanes: Ryze v Ornn, Leblanc v Aatrox, and Ezreal/Gragas v Varus/Braum. Mix in the pressure advantage that Olaf has over Sejuani early, and Splyce had no room to breathe in the early game. Schalke were able to take early infernal drakes and easily run down Varus in fights with their Leblanc and Olaf combo.

Excel Esports put up a bit more of a fight, but not by much. They had the early 3 kills to 2 lead but were still down 2k gold at 10 minutes just off of CS differential and Kleptomancy Kennon. FC Schalke 04 were able to take Baron at 21 minutes off a team fight win and snowball the game from there. Upset finished with another stellar 5/0/3 performance on Kai’Sa.

Fnatic Pick UP First Win…Then Nearly Give Away Perfect Game

We can now confidently say that Fnatic are not the worst team in the LEC. Fnatic overpowered Rogue in lane, with Rekkles picking up 2v2 kills bot and Bwipo playing skirmishes very well. Fnatic showed they still understand the macro game, as they punished Rogue for losing so hard early by taking Baron and repeating turret dives for the win. Rekkles capped their first win with a pentakill on Kai’Sa and finished with a 9/1/4 performance.

Unfortunately for Fnatic, that win did not result in any momentum against Misfits Gaming. sOAZ found his revenge by solo killing Bwipo only 6 minutes into the game, a terrible reminder of what Fnatic had to give up this offseason. A 3v4 fight win for Misfits top lane cemented their early lead of 4k at 13 minutes, and Fnatic had no shot playing from behind. Their 2 kills on Misfit’s bot lane late would be the only thing stopping Misfits from a perfect game. The final tally for Misfits included: 5-0 drakes, 11-0 towers, 16-2 kills, and 16.5k gold.

Things were not looking good for Team Vitality. They were down 12 kills to 3, Rogue were up gold, and Rogue were pushing mid with Baron. Jiizuke’s Ryze was pushing bot, trying to find some compensation for Vitality on the map.

Rogue backed off after taking the mid inhibitor, wanting to reset and stop Jiizuke’s push. Vitality had other ideas. Jactroll’s Alistar and Mowgli’s Olaf threw themselves into Rogue’s team, stopping them from getting their recalls off while Cabochard’s Jayce and Attila’s Ezreal used their teleports to join Jiizuke at Rogue’s base.

In one quick moment, Vitality won the game. Rogue could not get back in time despite have Baron empowered recalls. Rogue led the game in gold the entire way and were still up in gold when the game ended. Attila finished 0/4/0 while Rogue’s Kikis, HeaQ, and Wadid all finished deathless.

Misfits Gaming are not yet in the upper echelon of LEC teams after their second loss of the season. Excel Esports were able to prey on sOAZ’ aggression for two early kills and stall out the early power of Misfits.

The big play of the game happened at 28 minutes. Misfits looked like they were going to take Baron and accelerate the game against Excel’s better scaling composition. Instead, Expect’s Urgot flashed into the Baron pit and Smote Baron away with Unsealed Spellbook. He even picked up a kill on Sejuani as she tried to run away.

With that play, Excel had all they needed to scale up and take home the win. Misfits were not able to capitalize on the early strengths of their Irelia and Kai’Sa and allowed Excel to dictate the pace of the game. Misfits will have to work some kinks out to prove they belong with the other top teams in the LEC.

After a 3-1 start to the season, Splyce fall back to the middle of the pack with a disappointing 0-2 week. Though they played the two top teams, G2 Esports and FC Schalke 04, they will have to go back to the drawing board for Week 4. Critical team play mistakes, rather than individual outplays, were their issue in Week 3.

As outlined earlier, they were simply out drafted by Schalke and lost vision control against G2. You cannot pick three losing lanes and a losing jungle matchup in season 9 and expect to have any chance in the game. The game is just too fast-paced and the better teams know how to exploit early weakness.

Splyce adapted and showed they had a great early plan against G2. They attacked their solo lanes and hampered Caps’ laning phase, allowing Humanoid a large early CS lead. Kobbe and Norskeren lost lane hard, but Splyce were still leading heading into the mid-game. Somehow G2 took control of the vision in the top half of the map despite that being Splyce’s strong point. That can’t happen to a playoff team. Splyce will surely be looking to correct these mistakes in Week 4.

Player of the Week: Mikyx

Supports often don’t get the love that their carries do, but this week it was clear that Mikyx was a big reason why G2 continued their season unblemished. As we mentioned earlier, G2 were down gold early in both of their games before fighting back in the mid-game. Mikyx was a crucial part of G2 gaining the vision control they needed to make picks and level the gold deficits.

Additionally, he was landing his skillshots to start the plays. G2 put him on Thresh and Pyke, a couple of hook champions known for their playmaking potential, and Mikyx did not disappoint. He consistently hit the hooks that allowed G2 to start winning fights and claw their way back into the games.

Mikyx finished the weekend with a 4/4/32 K/D/A, giving him kill participation in 36 of G2’s 46 kills on the week. That’s particularly impressive for a team with such strong solo lanes and a jungler who is known for picking up First Blood. Mikyx’s season-long KDA of 5.56 is tops among supports in the LEC.