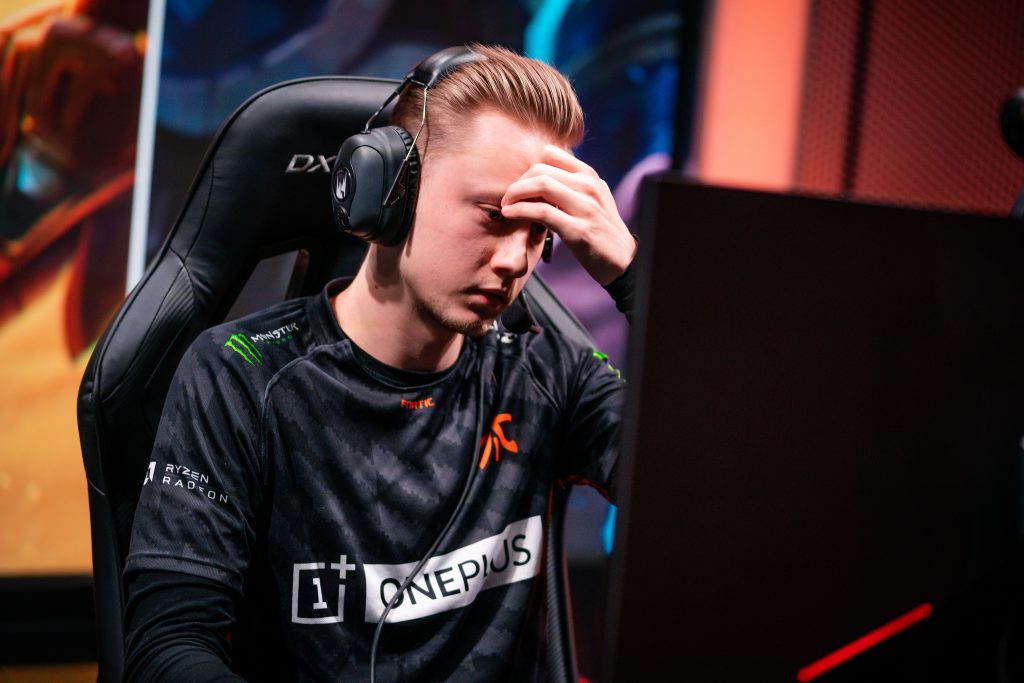 Week 2 of the 2019 LEC Spring Split is in the books, with G2 Esports taking sole possession of first place and Fnatic still searching for their first win of the season.

Week 2 of the 2019 LEC Spring Split is in the books, with G2 Esports taking sole possession of first place and Fnatic still searching for their first win of the season. We take a look back at the match results, top storylines, best plays, and standout individual performances from the past week in Europe.

Fnatic have not won a game since the Semifinals of the 2018 World Championship. So who takes the blame? The only starting lineup swap was Nemesis for Caps, so the easy conclusion is that Nemesis is the problem. However, it’s impossible to say that when incredibly Nemesis has been the team’s best performing player so far this split.

His first three games as a rookie on stage were: Akali vs Lissandra, Galio vs Vayne, and Galio vs Irelia. He’s supposed to lose lane in all three of those matchups. He didn’t feed in any of the games, dying only two times in those three games. In the fourth game when he finally had a winning lane matchup in Cassiopeia vs Aatrox, Nemesis had a 4/0/0 K/D/A and was up 10 CS while his team was down 14 kills to 5.

So let’s look at the rest of the lineup.

Bwipo has been fine, but Fnatic didn’t choose him over sOAZ because he is a “fine” top laner. It’s hard to ask him to have a huge impact when he’s laning Poppy vs Jayce and even Sion vs Poppy, but Fnatic need more from him. They are consistently losing the early game and Bwipo hasn’t been able to find the early pressure that he did at the 2018 World Championship. Some of this can be contributed to Broxah, but he also hasn’t presented Broxah the same gank opportunities in 2019

Broxah has looked lost so far in 2019, but is it all his fault? Bwipo has yet to be drafted into a lane that wins hard enough to expect that a top lane camp will pay dividends. Fnatic are drafting Nemesis into unwinnable lanes in three of his first four matches. We haven’t even gotten to bot lane, where Rekkles and Hylissang have gotten worse with each passing game. Broxah has lost his aggression and has become hesitant, but it’s hard to blame him. He went from having priority in all three lanes to having none, and that’s an impossible situation for a jungler. He’s had champions like Kha’Zix, Lee Sin, and Xin Zhao to make plays in the early game, so champions have not been the issue. He needs to be more proactive in finding plays before the team falls behind.

Fnatic’s bot lane of Rekkles and Hylissang have taken the biggest turn for the worst in 2019. Their game against FC Schalke 04 felt like a montage of Rekkles getting killed in bot lane. Hylissang has been caught out all over the map, but a lot of supports end up looking silly when they have no priority on the map to contest vision. Upset and IgNar outclassed them, but they also received a level 3 gank from Memento to snowball the lane.

The departure of Caps is what’s always at the forefront of the discussion for Fnatic, but remember they also lost their coach Dylan Falco in the offseason. Youngbuck stepped up to replace him, but the results have not followed. The games are being lost in the early game, but is that a function of poor drafting or just poor play? The answer often lies in the middle, but something needs to change.

However, given all of the problems and Nemesis’ surprisingly good play for a rookie, it’s still safe to say that Caps’ departure is the biggest problem for Fnatic’s struggles in 2019. There just is no bigger impact in League of Legends than consistently having mid lane priority, and that’s why teams are so keen to find and hold onto the best mid available. Nemesis has played well and done his fair share, but Caps was capable of more and did more for Fnatic. That isn’t to say that Nemesis can’t grow into that role, but players like Caps don’t grow on trees. The snowball effect of this lost lane dominance has been felt in every role. In 2019, Fnatic have to find a way to play the game without a dominant mid, and the early results have not been encouraging.

Karthus is one of the top jungler options in Season 9 and G2 Esports obviously know it, picking it twice for Jankos in week 1. In week 2, they showed off their counter composition against an enemy Karthus. Wunder played Karma, Jankos played Ivern, and Mikyx played Rakan, all contributing shields to guard against Karthus’ R Requiem. The two carries — Caps on Irelia and Perkz on Xayah, also have ways of dodging or lessening the damage from Requiem. Perkz can dodge Requiem with a perfectly timed R Featherstorm, while Irelia can charge her W Defiant Dance to take reduced damage.

The great thing about the composition is that G2 Esports didn’t have to sacrifice laning power to opt into this composition. Irelia is one of the strongest mid laners in the game and is pretty much picked or banned every match. Xayah and Rakan is a powerful bot lane duo with great engage and peel. Karma has a great laning phase top lane, especially against a melee tank like Sion. Ivern has no problems clearing the jungle and does exceptionally well when paired with lanes that have priority to allow him to invade.

It’s not a composition that you’re going to see every day or even every week, but G2 Esports showed they have something prepared for an enemy Karthus game. Karthus wasn’t touched in the 9.2 patch, so we’ll continue to see him going forward. Some other picks like Soraka and Kindred to counter him may find their way to pro play soon.

FC Schalke 04 picked up a 2-0 on the week to move into a tie for 2nd place in the LEC. At 3-1, their lone loss is to the prohibitive favorites G2 Esports. They’ve already beaten Team Vitality, who handed Misfits Gaming their first loss of the season. Upset and IgNar have looked like the best bot lane in Europe in the early going, especially after dominating Rekkles and Hylissang.

Maybe most impressive has been the play of their rookie mid laner. It seems like half the LEC mid laners are rookies, but Abbedagge has stood out as a player unafraid of the new stage. He played very well against former SK Telecom T1 and current SK Gaming mid laner Pirean, going 4/0/11 to his 0/2/4. Abbedagge was also very decisive on flashing in for engages on Aatrox against Fnatic, surprising them by his willingness to throw himself in there for the team. He is by no means a star yet, but Abbedagge’s development will be crucial to Schalke’s LEC chances and the early returns are promising.

Everything looked good for Misfits Gaming in the early game. They picked up First Blood on Jactroll before minions spawned by stacking on their red buff and catching him trying to sneak in an early ward. Maxlore visited top lane twice early, picking up kills on Cabochard that allowed sOAZ to have the pressure in the Aatrox vs Urgot matchup and Maxlore to quickly ramp up on Karthus.

The other side of the map was a different story. Attila and Jactroll turned around a GorillA engage with the help of Mowgli’s Olaf, then were able to solo kill GorillA in lane. Jiizuke had a much higher impact on Leblanc in skirmishes than Febiven’s Galio, who looked like he forgot to level up his ultimate for most of the game. Hans Sama wasn’t able to impact the game at all on the short-ranged Lucian, finishing 0/1/2 compared to Attila’s 4/0/9 on Draven.

All teams have off games, but Misfits did not look like the LEC broadcast proclaimed “superteam” against Team Vitality. Vitality were able to match or exceed Misfit’s laning prowess in all roles and looked to be much more coordinated in fights. Team Vitality returned their coach and four of five members, so the coordination advantage was not a surprise. Misfits will surely build synergy as the season rolls along, but Team Vitality let them know that they haven’t arrived yet.

Most analysts and fans would not expect Excel Esports to be the first team to put G2 Esports to the test in 2019, but that’s why they play the games. Despite taking a 10 kills to 2 advantage at 30 minutes, it would be disingenuous to say that Excel were winning the game, as they were still down in gold due to CS. However, they were putting real pressure on G2 and winning every fight they took.

Caedrel was looking to be the hero after a lot of criticism was thrown his way week 1. He earned a triple kill at 14 minutes and was a huge backline threat on Nocturne.

Excel could not find a way to take Baron and eventually took a fight in their red jungle that they went on to lose. G2 Esports took mid inhibitor and tried to take Baron but were forced off. On their following attempt, Caedrel ulted in to steal Baron and Excel won the ensuing fight to draw the game even again. Excel then started Elder Drake with double infernal and mountain in their back pockets, so the Elder Drake melted quickly.

Unfortunately for Caedrel and Excel, Perkz’ Draven was able to steal Elder Drake for G2. G2 Esports then pushed down mid lane for a fight. Expect had a great Sion flank to start things out for Excel, but Caedrel inexplicably chased Jankos’ Olaf around the entire fight, ignoring Caps and Perkz as G2 crushed through the rest of his team. By the time Caedrel made his way back, Caps was able to kill him and eventually end the game.

While it was promising that Excel Esports and specifically Caedrel put so much pressure on G2 Esports, it’s heartbreaking that crucial mistakes ended up biting them in their upset bid.

Player of the Week: Upset

IgNar goes hand-in-hand with the selection of Upset, but Upset gets the nod because the damage dealers get all the glory. Playing Kai’Sa in both of FC Schalke 04’s games this week, Upset went 8/0/8 against SK Gaming and 10/1/9 against Fnatic

Bullying Crownshot and Dreams would be expected, but to put an 0/5/0 score on Rekkles in the early game against Fnatic was outstanding work. The most beautiful play of week 2 was Upset and IgNar combo-ing their abilities to take down Rekkles in lane. Upset timed his W Void Seeker perfectly with Ignar’s Thresh Q Death Sentence so that Rekkles’ spell shield ate the Void Seeker and allowed the Death Sentence to land.

Upset and IgNar look like the top bot lane in the LEC so far in 2019.