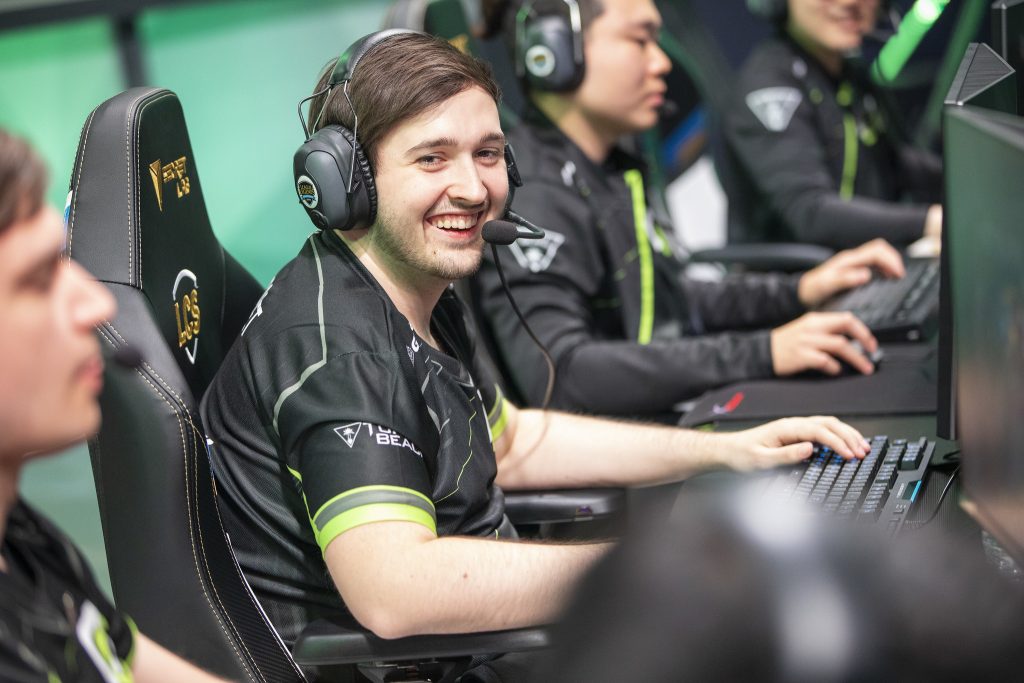 Week 4 of the League of Legends Championship Series (LCS) 2019 Summer Season is in the books. Team Liquid have once again risen to the top of the standings, while FlyQuest’s nightmare season continues in sole possession of last place. We look at where things stand and the top storylines after week four in North America.

SCARLET IMPRESSIVE IN DEBUT FOR OPTIC

OpTic Gaming announced starting mid laner Lee “Crown” Min-ho would be out for week 4 as he battles health issues, giving Marcel “Scarlet” Wiederhofer a chance to make his LCS debut. The OpTic Academy mid laner hails from Austria and has previously played for Origen and Millenium in Europe.

In his first game as an LCS player, Scarlet got to face off against the best mid laner in LCS history in TSM’s Søren “Bjergsen” Bjerg. Despite having to play the disadvantageous lane matchup of Vladimir into Syndra, Scarlet stayed relatively even in lane, helped in part by Bjergsen’s decision to roam top early. The rookie showed no issues holding up in lane to the league’s best in his first game.

Things weren’t as smooth on his first playmaking attempt in the LCS. Scarlet used his teleport to flank TSM at 23 minutes as TSM pushed down OpTic’s inner mid turret. Instead of corralling TSM, the rest of OpTic were in retreat and TSM were able to easily pick up the kill on an isolated Scarlet.

But Scarlet didn’t let that failure define his debut. At 26 minutes, Scarlet made a nearly identical play, this time with TSM pushing OpTic’s mid inhibitor turret. This time, it worked. Scarlet picked up a double kill on TSM’s bot lane and used that numbers advantage to pick three more kills and a delayed ace on TSM to turn the game around.

Scarlet finished with a 5/4/6 K/D/A in the win over TSM that helped keep OpTic on pace with the top teams in the LCS. Though they lost to Echo Fox on Sunday, Scarlet again played well enough to establish himself as a name to watch going forward in the LCS. Like Greyson “Goldenglue” Gilmer, he will be a name thrown around as a potential replacement when LCS starting mid laners struggle.

CLG HAS A POE PROBLEM

Counter Logic Gaming are 5-3 and tied for second place after another 1-1 weekend. Not bad for a team that finished 7-11 for a third consecutive split in the 2019 Spring Season, again missing playoffs. But as the meta has continued to revolve around early game priority, it is becoming harder and harder to ignore that CLG’s biggest star, Tristan “PowerOfEvil” Schrage, has a champion pool problem that is limiting the team’s potential.

CLG acquired Kim “Ruin” Hyeong-min prior to the Summer Season to be the top lane carry that Darshan “Darshan” Upadhyaya used to be for the team. They’ve used him as such — in eight LCS games, Ruin has played eight unique champions, all carries. The results have been mixed. Often, Ruin gets little jungle support and is left on an island while the rest of the team farms up and tries to scale.

Even as the meta has been consistently early game focused for the better part of a year, this isn’t to say there is no place for scaling compositions. Azir specifically has been a power pick recently. But CLG goes for scaling compositions game-after-game, with the culprit primarily being the mid lane. PoE has always been an exceptional mage player, but as the meta has shifted away from mages, there has been no adjustment by him or CLG to play the champions that fit in the current meta.

In 26 matches in 2019, PoE has played 1 non-mage in mid lane — a 1/3/0 Irelia performance in a loss to OpTic Gaming. That’s it. No Sylas, no Akali, no Renekton. This isn’t a disagreement with how the meta should be played or a 2019 problem either. In his career, PoE has played 325 professional games. In those games, his most picked non-mage/non-marksman is his 1-2 record Talon, followed by 0-1 records on Akali, Irelia, and Zed.

Sylas, Akali, and Irelia are huge picks that CLG either can’t or won’t run mid lane, meaning they have to ban them away or show their hand early by picking them specifically for Ruin. This leads to poor drafts and disadvantageous lane matchups because CLG can’t utilize the most important flex picks in the meta.

As good as PoE is on mages, it begs the question if CLG would be better off playing a lesser talented mid laner who could play the meta champions (again assuming this is a champion pool problem rather than stylistic coaching decision). CLG could better utilize Ruin’s flexible champion pool and could finally commit to a style of play that fits in 2019. Long-time CLG Academy mid laner Jean-Sébastien “Tuesday” Thery is already playing these champions in Academy matches, meaning CLG has the option if they so choose.

After starting their season 0-5, 100 Thieves have ripped off three consecutive wins to see themselves now only one game out of the playoff race. The controversial re-insertion of mid laner Yoo “Ryu” Sang-wook to the starting lineup over Kim “Ssumday” Chan-ho seems to have worked wonders for the squad, as they are now 3-1 with the new lineup configuration.

With the new configuration has come new life from their bottom lane. Bae “Bang” Jun-sik and Zaqueri “Aphromoo” Black have turned from the world’s most overpriced bot lane to one of the best in the LCS seemingly overnight. Bang in particular has finally lived up to the hype of his transfer to the LCS. Since the lineup change, Bang has gone a combined 16/4/30 in the four games after starting the year 3/6/13.

As exciting as this re-birth has been for 100 Thieves, they face a stern test when the LCS resumes in week 5. Games against both Spring Season Finalists TSM and Team Liquid await, though both will play in Rift Rivals while 100T will have the weekend off. Neither should underestimate the new-look 100T as they continue their charge toward playoff contention.

The LCS and LEC take a weekend off for Rift Rivals 2019. Team Liquid, TSM, and Cloud 9 will face off against G2 Esports, Origen, and Fnatic at the Riot Studios in Los Angeles, California. The LEC will be heavy favorites after G2 Esports’ dominant MSI Finals over Team Liquid and Fnatic’s perfect 6-0 start to the Summer Season, including a demolition of 5-1 G2 Esports. The action kicks off on Thursday, June 27 with G2 Esports against Cloud 9.