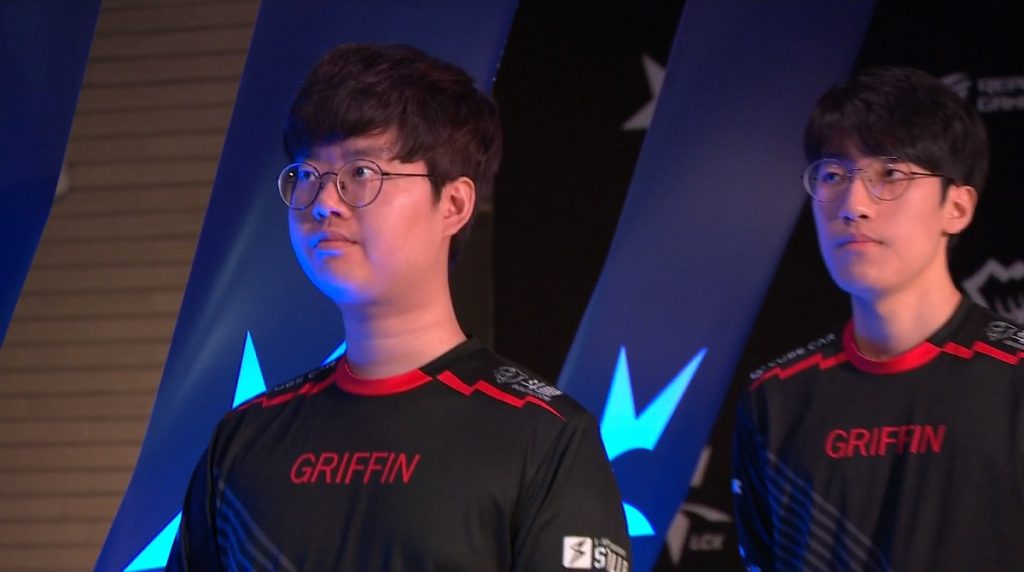 Griffin are looking very strong in the LCK this week. (Image screenshot from Twitch.tv/LCK)

Week nine in the 2019 LCK Spring Split is done. Griffin have clinched their automatic berth in the Finals while Gen.G, Afreeca Freecs, and KT Rolster fight to avoid relegations with Jin Air Green Wings. We look back at the match results, top storylines, best plays and standout individual performances from the past week in Korea.

GRIFFIN BOUNCE BACK IN A BIG WAY

Consecutive losses to Gen.G and Afreeca Freecs in week eight, teams fighting to avoid relegations, were a cause for concern for Griffin. Would those losses threaten to tear the team apart or free them up from the burden of pursuing the perfect season?

In week nine, it looked like the latter. Griffin came out angry and steamrolled Hanwha Life Esports.

Kim “bonO” Gi-beom’s Zac executed a gank of his own on Choi “Sword” Sung-won’s Jax a minute later. Tarzan tried to get there in time for the counter gank, but Sword had already taken too much damage from bonO and Kim “Thal” Jun-yeong’s Yorick.

That was the first and last kill Hanwha Life Esports would pick up in game one.

Gwon “Sangyhoon” Sang-yun’s Kalista did not flash Tarzan’s combo at eight minutes to pick up another kill for Griffin. HLE tried to bring four players down bot at 11 minutes to relieve pressure for their bot lane, but it ended in disaster. HLE overextended trying to secure a kill and allowed Jeong “Chovy” Ji-hoon’s Lissandra to teleport behind them. Griffin turned it around for three kills, one apiece to Viper, Tarzan, and Chovy.

Hanwha Life Esports took a top turret while Kim “Lava” Tae-hoon’s Zoe was dove by Tarzan and Chovy, taking all the plates as well. But that would be the only objective HLE would secure in the game.

Sporting an 8.5k gold lead with late game insurance in Jax and Vayne meant that Griffin were able to win this one comfortably. How’s this for a statement game: 15-1 kills, 10-1 turrets, 3-0 drakes, and an almost 19k gold lead in the 28-minute win.

The rest of their three games on the week were just as dominant. Game Two against HLE was a 14-kills-to-6 win for Griffin. Chovy finished a perfect 5/0/6 on Ryze, opting for the Doinb Righteous Glory and Rylai’s Crystal Scepter build. Tarzan was very active on Jarvan IV again, finishing 5/1/8 for 13 of 14 kill participation.

Potential playoff threat DAMWON Gaming were no threat at all to Griffin in their series. Game One was another steamroll in the mold of the Hanwha Life Esports series.

DAMWON Gaming picked up a lone drake in terms of objectives and Kim “Canyon” Geon-bu’s Jarvan IV secured their lone kill just after 22 minutes. Tarzan’s Elise finished 5/0/2 including a triple kill to end the game. Griffin won Game One in 28 minutes, leading nine kills to one with a 14k gold lead.

DAMWON Gaming brought on Son “Punch” Min-hyuk for Canyon in Game Two, but Griffin banned away his signature Lee Sin pick. Tarzan made him look silly all game, culminating in a final score line of 5/1/12 for Tarzan’s Jarvan IV and 0/7/4 for Punch’s Elise.

When Griffin has Tarzan playing like he did this week, they are the best team in the world. Tarzan and the coaching staff certainly made an effort to put him on heavy ganking junglers Jarvan IV and Elise, and it paid off. Tarzan showed more activity and put his lanes ahead, making games unwinnable for enemies against the team fight coordination that Griffin possesses. Griffin never trailed by more than 500 gold in any of their four games this week.

Griffin has matches remaining against Kingzone DragonX and Jin Air Green Wings in week ten. They’ll then have a long wait before they play again after receiving an automatic berth to the LCK Spring Playoff Finals.

SANDBOX Gaming’s 0-2 loss to SK Telecom T1 opened the door for Kingzone DragonX to jump up to third and they did so. KZ beat KT Rolster 2-0 and Afreeca Freecs 2-1 to pass SANDBOX Gaming in the standings on game score (25-12 to 26-15).

Kingzone DragonX did not have much trouble in their series with KT Rolster. A big five man ace for the squad just before 20 minutes opened a 6k gold lead. They were in control the whole way through despite taking 36 minutes to close it out. Kim “Deft” Hyuk-kyu’s Ezreal supplied the damage, dealing 37.3k to KT Rolster in his 5/1/8 performance.

KT Rolster took a brief 300 gold lead 17 minutes into game 2, but that was inconsequential based on team composition. Jeon “Zenit” Tae-gwon’s Vayne offered some late game, but that paled in comparison to KZ’s late game of Gangplank, Rek’Sai, and Kog’Maw. Go “Score” Dong-bin’s Xin Zhao fell off with no sizeable lead from KT Rolster and Kingzone DragonX could win the remaining fights in their 23 kills to 14 win.

Afreeca Freecs came out with some heat. Lee “Dread” Jin-hyeok’s early gank bot set-up Kim “Aiming” Ha-ram’s Lucian for First Blood. Another fight just after six minutes went 3-for-0 to Afreeca, with two more kills over to Aiming. Stacked with an early game composition of Jayce, Elise, and Lucian, it was just what Afreeca needed to snowball the game. Kingzone DragonX stalled all the way to 37 minutes, but Afreeca’s lead had grown to 10k and KZ could never match Afreeca in items.

Kingzone DragonX made a small adjustment by banning  Kim “Kiin” Gi-in’s Jayce in subsequent games, forcing Afreeca to play a different style. The decision was hugely successful as KZ dominated the final two games of the series.

Kingzone DragonX dominated game 2 from start to finish. Moon “Cuzz” Woo-chan’s Rek’Sai picked up First Blood on Aiming’s Kai’Sa and finished the game 6/0/3. Kiin was held in check to a 0/1/0 score on Aatrox into Kim “Rascal” Kwang-hee’s Kennen. The final tally for KZ was 14 kills to 2 in the 29 minute win.

Kiin tried his hardest to carry game 3 for Afreeca Freecs. Time-after-time his Akali would pick up a kill team fights, but Kingzone DragonX were too strong. Cuzz’s Camille was active early, picking up First Blood for Heo “PawN” Won-seok’s Ryze immediately. Cuzz finished 7/3/9 compared to Dread’s 1/7/9 on Jarvan IV. Kiin finished the game 7/2/1, but the rest of his team combined to go 5/25/26.

Kingzone DragonX’s final match of the season is against Griffin. That could be good or bad news. Obviously Griffin are the best team in the league, but Griffin have nothing left to play for in the season, and we saw how that turned out G2 Esports and Team Liquid. Kingzone DragonX could also benefit if Griffin want to give some play-time to jungler Seo “Kanavi” Jin-hyeok or support Jeong “Kabbie” Sang-hyeon.

With SANDBOX Gaming’s final match against Gen.G, KZ will probably need to find a way to beat Griffin to secure their bye to round two of the LCK Spring Playoffs.

PLAYER OF THE WEEK: TARZAN

He’s earned it before, and he’ll earn it again. Tarzan was the most important player this week in turning the Griffin ship back around. His early activity on Jarvan IV and Elise opened the games up for Griffin to dominate through their superior fighting ability.

He finished each of his four games with 5 kills, slashing a combined 20/2/32 for a 26 KDA on the week. That brought his season long KDA up to 9.28, almost doubling Clid’s second place among junglers. He also has strong kill participation (74.7%) and kill share (23.1%) despite playing on a team with such good players. That shows how reliant Griffin are on Tarzan to start their plays, as Griffin aren’t the kind of team to solo kill their opponents across the map.

The long bye until playoffs should give Tarzan and Griffin an even longer look at how to plan out their early games in the Finals. That should be an absolutely terrifying prospect to whatever team challenges them for the LCK Spring Split Championship.