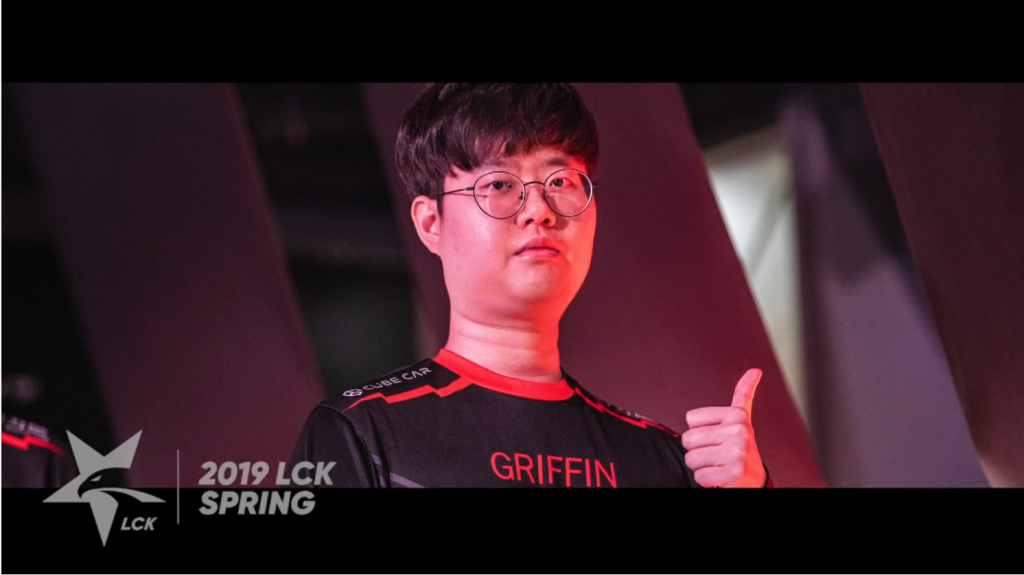 Though still in first-place, Griffin are looking less dominant atop the LCK standings.

Week eight in the 2019 LCK Spring Split is done. Griffin suddenly appear vulnerable atop the standings while Jin Air Green Wings are locked into fighting in relegations. We look back at the match results, top storylines, best plays, and standout individual performances from the past week in Korea.

Griffin were well on their way to an undefeated regular season. They had already swept their top competition, SK Telecom T1 and SANDBOX Gaming, leaving DAMWON Gaming as the only big test left in the season. The 3-10 Gen.G and 4-10 Afreeca Freecs could not be considered threats to the 12-0 Griffin juggernauts.

But that’s why they play the games.

Things started innocently enough for Griffin in their first game against Gen.G. They picked up the first two kills, an early air drake, and Rift Herald. Park “Ruler” Jae-hyuk’s Vayne got an early shutdown kill on Son “Lehends” Si-woo’s Galio, but Griffin still had a 3k gold lead throughout most of the game.

Gen.G made the call to start Baron at 36 minutes. By keeping their gold deficit still only 3k, they were now on an almost equal footing given the scaling nature of their composition. Lee “Tarzan” Seung-yong’s Nocturne unsuccessfully tried to steal Baron, and Gen.G took the kill and objective.

Elder Drake was then free for Gen.G with Tarzan still dead. Gen.G pushed mid with both buffs, trying to force on Griffin before they expired. Song “Fly” Yong-jun’s Lissandra was caught out and burst down immediately, but Griffin made the mistake of chasing into Ruler. He kited back before aggressively turning and flashing onto Jeong “Chovy” Ji-hoon’s Corki. He picked up that kill before Chovy could flash and helped Gen.G clean up the rest of Griffin for a quadra kill and ace. Gen.G then closed out the game in short order.

As the teams headed into game two, it was important to note we’ve seen Griffin be stubborn in champion select before, notably against T1. After a terrible Urgot pick in game one of their rematch, Griffin doubled down and picked him again in game two. Of course, they won that game, but finally abandoned the pick after another lackluster performance.

So it was no surprise that the only team in the world leaving Cassiopeia open at the beginning of the season would not feel the need to ban Vayne away from Ruler after his big carry performance. For the first time in 2019, Griffin were forced to pay for a mistake in the draft.

Griffin went all-in on the early game, drafting Xin Zhao for Tarzan and Lucian for Park  “Viper” Do-hyeon. Though Griffin picked up the early kill lead, the largest they ever extended their gold lead was 1.6k at 20 minutes. That would never be enough against the late-game scaling Gen.G had in Han “Peanut” Wang-ho’s Zac and Ruler’s Vayne.

Tarzan was able to steal Baron to delay the inevitable, but eventually, Gen.G could force the right fights to close out a stunning 2-0 win over Griffin. Ruler finished a perfect 9/0/3 on Vayne and dealt 22.5k damage to Griffin — almost doubling the next highest output in the game.

Griffin did take something away from their matchup with Gen.G, as evidenced in their next series against Afreeca Freecs. They banned Neeko all three games, including both on the blue and red side. Perhaps they thought Lee “CuVee” Seong-jin’s on-hit Neeko build, not Ruler’s Vayne, was the problem.

As it turned out, Griffin have more problems than anyone thought heading into the week. Despite Chovy and Tarzan dominating the series over AF’s Lee “Dread” Jin-hyeok and Kim “SSUN” Tae-yang, Griffin again fell to a superb performance from a bot laner. Kim “Aiming” Ha-ram finished the series a combined 16/4/11, including 14/3/9 in the two Afreeca wins.

There is no doubt that Griffin will spend the week discussing what they can do to better play around the enemy ADCs, but is there real cause for concern? Was this just an off week or proof that Griffin aren’t as good as they looked through the first seven weeks of the season?

The answer, as always, is probably a little of both. Griffin are incredible at making plays together and fighting in the late game, but they sometimes fall into the mindset of waiting for the perfect play, rather than taking the good play. They aren’t always punishing enough when they have the superior early draft, instead opting to take it late knowing that their team fighting is second to none.

Griffin will have a chance to redeem themselves this week against playoff contenders Hanwha Life Esports and DAMWON Gaming. Though they hold the tiebreakers over SK Telecom T1 and SANDBOX Gaming, more losses from Griffin could make it an interesting fight for the first seed in the LCK.

Once looking on the fringe of playoff contention, Kingzone DragonX find themselves in sole possession of fourth place after 2-0 wins against Jin Air Green Wings and Gen.G.

A win over relegation candidate Jin Air Green Wings should be a foregone conclusion for a playoff team, so it was no surprise that KZ handled JAG with ease. The final kill scores for the games were 13-4 and 12-7 in favor of KZ, with the games lasting 27 and 36 minutes, respectively. The only real thing to learn from this was that Kim “Rascal” Kwang-hee likely won’t be back on top lane Lucian anytime soon after going 0/4/2 with a paltry 5.0k damage dealt in the game two win.

Kingzone DragonX definitely studied Gen.G’s game plan to beat Griffin, showing a counter of their own. KZ did not ban Vayne, but instead picked an incredible amount of dive in their composition to force someone else on Gen.G to beat them. Vladimir, Rek’Sai, and Azir highlighted the picks in game 1, with Lissandra and Rakan backed up by Karthus and Gangplank ultimates in game two.

Ruler opted onto Ezreal in both games and had a solid showing, finishing 4/2/8. But despite dragging both games over 40 minutes, Gen.G did not have the same scaling damage output they had against Griffin and KZ were able to win the fights.

It’s important to note which teams are adapting and implementing new draft strategies late in the season before playoffs. Based on their series against Gen.G, Kingzone DragonX look like a team that will be well prepared against any opponent they face.

The sad saga of Hanwha Life Esports continues. Too good to ever face relegation, but not good enough to make it into the playoffs, they are the true gatekeepers of the LCK. After losses to SK Telecom T1 and DAMWON Gaming, they again sit at the dreaded sixth spot in a league that sends only five teams to the playoffs.

Yes, they took a game off each DWG and T1, but a deeper look is more revealing. Their win over DWG came against Jang “Nuguri” Ha-gwon, the most coin-flip player right now in the LCK. HLE were non-competitive in game three when Lee “Flame” Ho-jong was inserted back into the starting lineup.

The game one win against T1 was nice, but HLE were demolished in the final two games. Game 2 was all but a perfect game for T1. HLE had no kills, took no turrets, and managed only a single drake pickup for themselves. Game three wasn’t much closer as T1 took a 12-kills-to-3 win in just under 29 minutes.

Hanwha Life Esports are still just one game behind DAMWON Gaming for the 5th and final playoff spot, but DWG now own the tiebreaker after the season sweep. HLE have a tough week nine against Griffin and SANDBOX Gaming before closing against KT Rolster in week ten.

PLAYER OF THE WEEK: RULER

Sure, Gen.G are all but eliminated after their loss to Kingzone DragonX in their second match of the week. But who cares about that after Ruler almost single-handedly propelled them to the first win over Griffin in 2019?

His 14/0/6 performance on Vayne against Griffin was near perfection. Griffin have been lauded for their team fighting since their inception, but Ruler picked them apart in both games. That’s no easy task against champions like Nocturne, Galio, and Xin Zhao. Even his 4/2/8 Ezreal performances against Kingzone DragonX weren’t bad; he just wasn’t able to carry his team given the compositions.

It must be a frustrating season for Ruler, who has gone from winning a World Championship to struggling to make Worlds and now fighting to stay out of relegations domestically. But if you need any proof that Gen.G still revolves around him, look to his absurd 41.6% kill share on the season. That’s the highest among all players in the LCK and almost 10% higher than the next highest ark.

Ruler won’t be playing in any important playoff or international matches this spring, but this week we were treated to a show of why he’s still one of the best ADC players in the world.