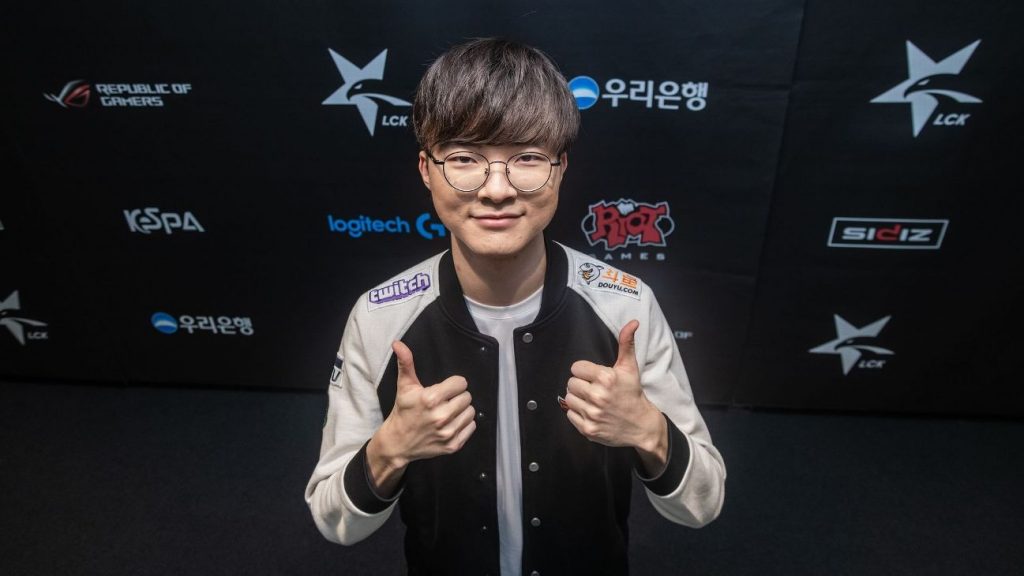 It took a while for it all to click, but SKT are starting to find their rhythm in the LCK.

Week 6 in the 2019 LCK Spring Split is done. Griffin sits atop the standings, while Jin Air Green Wings are the only team yet to pick up a match win. We take a look back at the match results, top storylines, best plays, and standout individual performances from the past week in Korea.

Before the season, we wondered if SK Telecom T1 could challenge Griffin for the top spot in the LCK in the 2019 Spring Split. With only 4 weeks left of regular season action left and Griffin sitting on a 3-game lead, that looks unlikely. T1 took some time coming together, but they seem to be rounding into form at just the right time to make their rematch with Griffin a legitimate fight.

T1 didn’t have many problems in their first match of the week against Gen.G.

They opened the series with a quick skirmish win in Game 1, baiting Life’s Alistar into engaging a fight Gen.G could not win. T1 picked up two kills and transitioned to an early infernal take, an especially good drake for a composition that included Fiora, Rek’Sai, Lissandra, and Lucian.

Khan had the Fiora counter pick to CuVee’s Aatrox, so Gen.G had no way to answer Khan in the side lane 1v1. The hope would be to force skirmishes with the Olaf and Galio combo, but that becomes problematic when T1 take the early gold lead and have air and infernal drakes to aid them.

Three more kills for T1 led to another infernal take, giving them a 7k gold lead just 21 minutes into the game. Considering they also had the scaling advantage and double infernals, it was all but over for Gen.G. T1 eventually closed Game 1 out with a 14-5 kill advantage in under 30 minutes.

Gen.G got First Blood in Game 2, just as they did in Game 1. Roach’s Sylas dealt just enough damage to Faker’s Lissandra to give Fly’s Karthus enough damage on his R Requiem to finish Faker off. Unfortunately for Gen.G, that was one of only two kills they’d manage the entire game.

The first big fight of the game came just after 26 minutes. Gen.G already had two air drakes, and with another one spawning, T1 didn’t want to concede that kind of advantage to their opponent. T1 funneled Gen.G around the drake pit and used their AoE to full success. Mata’s Alistar combo-ed, Khan’s Riven got in there, Clid dropped his Jarvan ultimate, and Faker used his AoE and made full use of Lissandra’s passive to crush Gen.G 5-1 in the fight.

T1 transitioned to a free Baron take, and now with full control of the game, an infernal drake spawned. That had to feel terrible for Gen.G who only picked up two airs and an ocean when they had the early priority. With another 5-for-0 ace, T1 pushed for the win against Gen.G.

T1’s second match with Kingzone DragonX, currently in playoff position, seemed like a stiffer test. But they suffered the same crushing 2-0 as Gen.G

KZ thought it would be okay to leave up Leblanc for T1 and Faker. It was not okay:

But the real stomping was in Game 2. Kingzone DragonX took Rift Herald just before 10 minutes and Rascal’s Yorick was able to push down a turret just after. Those two objectives would be the only things that stopped T1 from a perfect game.

Deft’s Kalista got repeatedly picked on and the star of KZ finished the second game of the series 0/7/0. The rest of the team didn’t fare much better. TusiN finished 0/5/0 and Rascal and Cuzz each finished 0/3/0. PawN’s Zilean finished 0/0/0.

Clid controlled the game for T1, as evidenced by his 17 of 18 kill participation on Jarvan IV. Mata was second best with a 0/0/14 score on Tahm Kench.

Neither Gen.G or KZ are a top team in the LCK, but the dominance T1 displayed in their wins this week brings optimism for their rematch with Griffin. Griffin will still be the clear favorites, but maybe SK Telecom T1 will be the team to finally give them a real run for their money.

No Problems for Sandbox or Damwon

The young teams combined for a perfect 4-0 week to further cement themselves as playoff teams.

DAMWON Gaming had one of their two Jin Air Green Wings byes this week and dealt with them accordingly. They used the first game to redeploy their combo of Nuguri and Punch, to good success. Nuguri controlled top lane, finishing with a Flame Horizon in place of Flame. Punch, very much in a fight for the starter role with Canyon, had a solid 1/0/5 performance on Lee Sin.

But for the rest of the week, it was all Flame for DWG. They clearly value his shotcalling ability over Nuguri’s laning for now, though Flame has been laning spectacularly in his own right. He had favorable matchups in 2 of 3 games against Kiin, but he did his best to abuse them and build a lead for DWG.

Flame’s shotcalling has been vital to DAMWON’s success.

Punch got the Game 1 start against AF. It was a hotly contested game that went 40 minutes, but DWG eventually lost it. That made room for Canyon, who made the most of his opportunity. He got the nod in Games 2 and 3 and didn’t die in either, finishing the series a combined 3/0/22 on Sejuani and Aatrox.

SANDBOX also played Afreeca Freecs and Jin Air Green Wings this week, though they only needed four games to sweep both matchups. Their solo laners Summit and Dove continued to impress, dominating their matchups.

Dove’s Syndra went a respectable 5/5/8 in Game 1 against AF, but that wasn’t good enough for him. He went on to be deathless in his final three games on the week, finishing a combined 11/0/21 on Lissandra, Leblanc, and Ryze. Summit did more brawling in the top lane, but had constant lane priority in his matchups. He is one of the few still picking up Aatrox in the top lane and finding consistent success.

SANDBOX and DAMWON will meet in the first matchup of Week 7. A win for SB would give them a 2-0 for the season and a 2-game lead on DWG in the standings, making it very difficult for DWG to pass them before playoffs. A DWG win would even the series at 1-1 and would move the teams into a tie for 3rd place at 9-4.

Hanwha Life Esports pulled out their series against Gen.G to remain tied for 5th in the LCK at 7-5, but the damage was done with their loss to Kingzone DragonX. HLE had a chance to pick up the season series win and a 2-game lead for the fight for the final playoff spot, but KZ easily dispatched them 2-0.

It could be the crushing blow in another season of heartbreak for HLE. Always the gatekeeper between playoff teams and relegation teams, HLE are heading that way for another season. Their 7-5 record puts them well ahead of the 7th place 3-9, but the LCK only takes five teams to the playoffs and they are currently on the outside looking in. HLE are by no means doomed yet, but they had tough matchups in Week 8 against SK Telecom T1 and DAMWON Gaming after their Week 7 matchup with Jin Air Green Wings.

Player of the Week: Khan

It makes sense why SK Telecom T1 want Khan to play tanks. The meta is constantly evolving and they need to make sure that they’re prepared for all scenarios. Even in a meta where carries are relevant and viable, tanks always still exist because of their ability to go low economy builds and team fight.

But man is it fun when T1 let Khan play carries top lane. They did just that this week and Khan rewarded them with stellar gameplay. He died once in his first game on Fiora against Gen.G, but not again over his final three games. His combined K/D/A across his four games was an unreal 17/1/18 on Fiora, Riven, Jayce, and Vladimir. Not a tank in the bunch.

On the season, he is top four among LCK top laners in KDA, CS per minute, gold per minute, and gold share. T1 have been giving him a lot of carries in the side lane recently, and Khan has been performing by generating gold leads for his team. He may not have the kill participation numbers of other, more team-oriented top laners, but he is still generating advantages in side lanes.

It should be a battle of contrasting styles this week, as Griffin’s Sword holds the smallest gold share among LCK top laners at 20.4%. We can only hope we’ll get to see Khan on some carries against Sword this week.