How OWL Turned Torbjorn From Meme to Meta in Week Nine 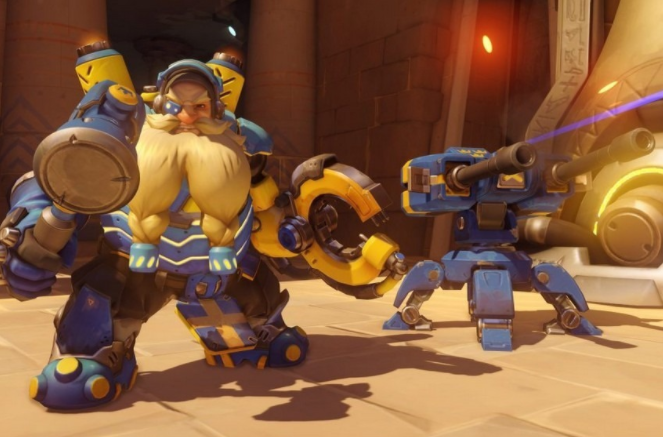 Torbjorn has been a meme basically since Overwatch's release. But in week nine, pros made him meta. (Photo courtesy Blizzard)

During Overwatch League (OWL) week nine both Mei and McCree were banned from the hero pool. Without either of them, it was unclear who would take their place in the DPS meta. Of all the characters who could become the dominant meta, very few people predicted that Torbjorn would be elevated to the essential DPS slot, but that’s exactly what happened.

Viewers during week nine had the honor and privilege to see the Torbjorn meta for the first time in OWL history. Torb was played in both North American and Asian games, but he was more common in the North American meta. Although Torb is often considered a meme hero, in OWL week nine he was un-ironically played in most matches.

Not only did Torbjorn show up in almost every single game throughout week nine, he actually ended up dominating the DPS stats. Jae-hyeok “Carpe” Lee is one of the best damage dealers in all of Overwatch and he ended up dealing 14,000 damage/10 minutes as Torb in the Fusion’s match against the Justice. Carpe even dealt 17,000 damage in a single map on Volskaya Industries. 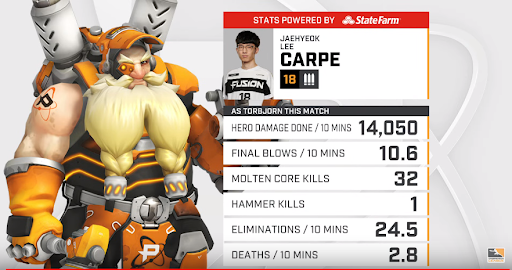 Those numbers are incredible, especially from a hero many considered to be a joke. Some of the best DPS players in the game took up the Swedish engineer’s hammer and showed us that Torbjorn is more than a meme, he is a viable and devastating DPS pick even at the highest levels of the game.

Throughout the first eight weeks of the Overwatch League (OWL) season three, the dominant DPS meta picks have been Mei and McCree. Mei in particular has become a fixture in the OWL meta, being played in nearly every match played so far this season. 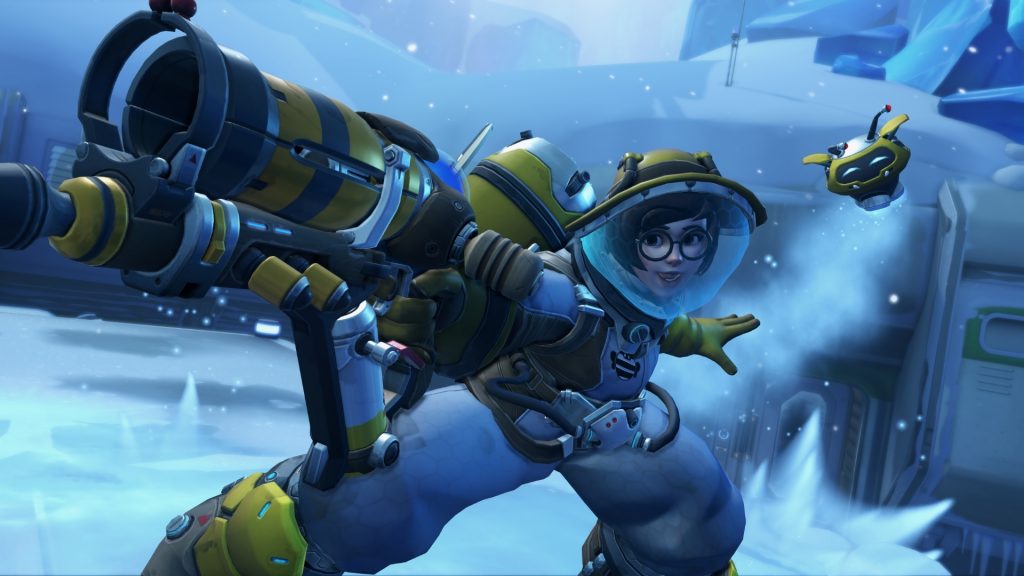 Mei can freeze multiple enemies at once with her primary fire, she can heal herself and become invulnerable for several seconds with Ice Block, and she can use her wall to isolate enemies. On top of her incredible utility, Mei’s ultimate ability is one of the best in the game since it can cover and hold a large area of space for five seconds. McCree has been the other go-to pick in the Overwatch League over the past couple of seasons, due to his consistent and accurate damage at range. Before hero pools, Mei and McCree would probably have been the top two DPS indefinitely in season three, or at least until the developers made drastic changes to Mei or McCree’s character abilities.

At first glance, Torbjorn is an odd pick to replace Mei or McCree. He has been a bit of a meme in Overwatch since the release of the game. In his original form, the Swedish Engineer was clunky, his gun was inaccurate, and he was forced to spend most of his time building and babysitting turrets to be even moderately effective.

In 2018, the Overwatch Developers set out to change Torbjorn’s destiny by revamping his kit completely. After the rework, Torbjorn can now throw his turret out without needing to upgrade it or babysit it. The developers added the new Overload ability, which made him far more survivable and elusive. The developers tuned his rivet gun so his shots were more consistent which made it possible to aim with great accuracy. Finally, they gave Torbjorn his new Molten Core ultimate ability, which made his ultimate far more useful to his team.

The 2018 rework definitely made Torbjorn viable, with the character making many appearances in the Master level games on the competitive ladder. Interestingly, Torbjorn has the highest pick rate in grand master, with his lowest pick rate being in Gold and Platinum. Nonetheless, Torb continued to be seen as a joke in the Overwatch League, picking up an abysmal 0% pick rate in OWL season two. To be fair, in season two OWL teams barely ran DPS at all.

When you think about it, Torbjorn’s current kit has the potential to provide much of the utility that would usually be covered by Mei. Although he can’t freeze or trap enemies, he is able to give himself a burst of health and damage with his Overload ability which makes Torbjorn decently survivable much like Mei. His ultimate has the potential to cover a large area and actually lasts twice as long as Mei’s ultimate. Torbjorn’s primary weapon fires projectiles that deal similarly devastating headshot damage to Mei, with a similarly generous hitbox. On top of all of these abilities, Torbjorn comes equipped with a turret which deals 16 damage per second. When his turret is well placed, the turret can function as a 7th player on the battlefield and 16 damage per second adds up if the turret is not dealt with.

In short, Torbjorn’s kit is really good, there just has never been a reason for OWL teams to test that out when Mei was already known for her incredible abilities. In some ways, Torbjorn is actually preferable to Mei. Mei is a great hero for up close, but her alternate fire takes nearly two seconds to charge and fire, compared to the instant shot from Torb’s rivet gun. Torb’s overall DPS over range is higher and he is more effective from the high ground than Mei when you also consider his turret. Torb doesn’t replace Mei in the meta so much as he provides a compelling alternative to Mei for teams who want to focus on taking up highground positions.

The way the professionals played Torb was interesting to watch. Most OWL DPS players played the character similarly in their various matches. Most of the top Torb players like Dong-jun “Rascal” Kim, Carpe, Corey “Corey” Nigra, or Yi “JinMu” Hu, played the character by alternating between passively holding the high ground while spamming the enemy team with the rivet gun, flanking elusively to attack from unexpected positions, and aggressively charging straight at the enemy frontline.

Anyone who spends a significant amount of time watching Torbjorn’s perspective in OWL games will quickly pick up on the importance of holding the high ground at the start of neutral engagements. The highground not only superpowers Torb’s turret placements, it also gives Torb a great vantage point to fire his rivet gun from. Torbs kit is pretty defensive, so it’s to his advantage when enemies have to push him.

Many people think the key to Torbjorn’s playstyle is primarily about placing cheeky turrets, but in reality success as Torbjorn is all about proper management of your Overload ability. Yes, OWL players showed off some pretty clever turret placements, but they never rely on their turret damage as their primary contribution to the team. Even if the enemy destroys their turret right after its creation, Torbjorn is still capable of very high burst damage with the proper use of Overload.

When he has access to his Overload it’s very difficult to kill Torbjorn. He is already a small target, so when you give him a bonus to his health and speed, the man becomes a nightmare to bring down. Overload instantly gives him 100 armor, a 30% buff to his movement speed, and allows him to shoot faster i.e. deal more damage. This ability allows him to aggressively flank and hold forward positions throughout the map in a way that a less tanky DPS just can’t. OWL players used this ability to move independently and attack from unexpected angles.

Although the turret isn’t the primary focus of a good Torb player, the turret can definitely make a huge difference if the enemy doesn’t deal with it. The best turret locations are hard to reach for the enemy team, while also being positioned to have line of sight on an important choke point.  This can be a difficult thing to balance, however it was clear that week nine Torb players did their homework. They came in with a series of very interesting and effective turret placements that players of all levels could learn from.

On the Downtown point of Busan, this turret location is able to deal damage to the main center choke, while being protected from attacks coming from the point below. The Fusion held the choke close up, making it difficult for the Justice to take the turret out, especially without a sniper who could fire at the turret from highground. The week nine meta involved a lot of short range characters like Reaper, D.Va, and Moria, making the turret a more effective tool than usual. 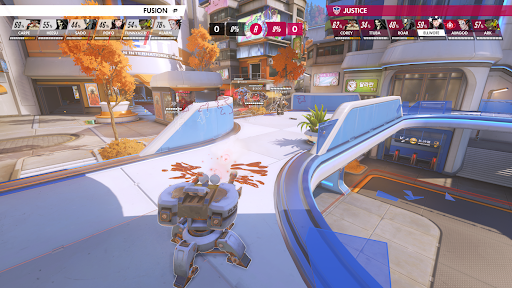 We can thank Jinmu for this really neat placement on point B of Volskaya industries. The turret is able to cover the front half of the point, while also being incredibly inconvenient to get rid of if you are fighting on the point. Presumably there will be a team fight going on, so forcing people to choose between dealing damage to your team or your turret is a good idea. Either choice will probably get them killed. 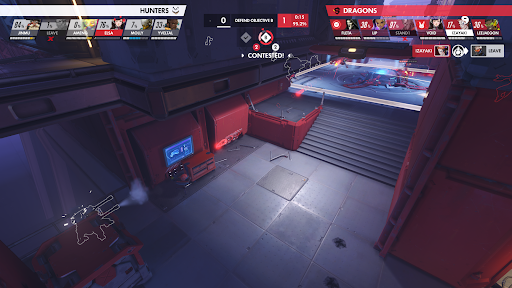 As it turns out, there is a bush that can cover your turret on the first capture point of Eichenwalde. Kyle “KSF” Frandanisa is shown here with his turret tucked back there. As soon as the enemy comes out of the choke point they are vulnerable to this turret placement. The enemy team will likely struggle to locate the turret though, since it is covered by the bush. 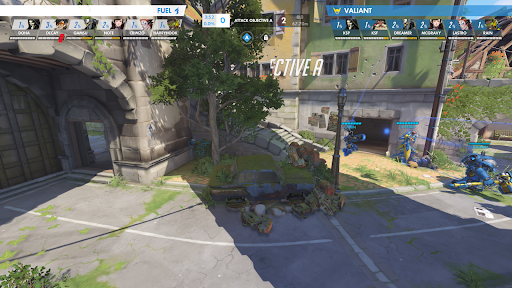 In conclusion, if the goal of the hero pool feature was to introduce new and exciting metas throughout the season, then the feature is definitely accomplishing its goal. It is doubtful that Torbjorn would be displayed so pervasively in the Overwatch League without the hero bans on Mei and McCree. Now that the teams and fans have seen what he can do, it is quite possible that Torbjorn could become a fixture in the OWL meta, for at least some situations. Forcing the OWL teams to adapt and explore new options has been a big win for the Overwatch, for the Overwatch League, and for Torbjorn mains everywhere.