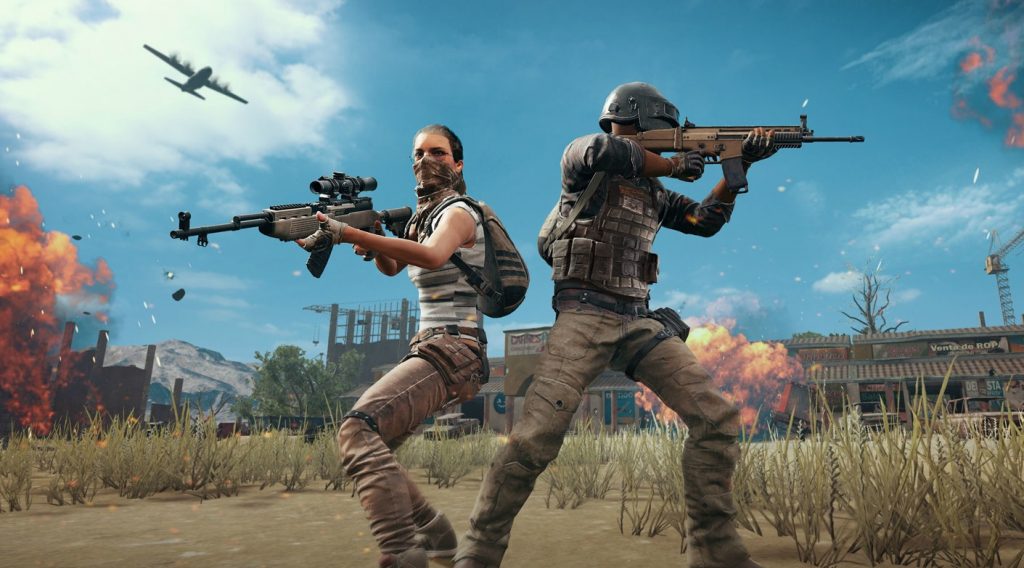 PlayerUnknown’s Battlegrounds, better known as PUBG, is a multiplayer battle royale game in which players drop onto an island and fight to be the last one left standing. There are currently three maps: Erangel, Sanhok, and Miramar. You can choose whether to play solo, duo, or with a squad of up to four players. Games load in with up to 100 players in total.

How to Play PUBG

Once you have jumped into the game, you load into spawn island and wait until the game begins and the plane takes you away. The plane has a visible flight path available to you on your map (pre-bound to M) that you can view as it travels over the island. When you decide where you want to drop, you jump from the plane and parachute to the ground.

Once on the ground, you will want to grab loot before you fight. Loot are items such as weapons, gear, and first aid supplies that are scattered across the map, found most often in buildings. You can easily sort through your loot and check what you have by bringing up your inventory by hitting TAB.

Weapons in PUBG include guns, grenades, and melee weapons. There are four types of melee weapons: a crowbar, machete, pan, and sickle. These deal more damage than punching opponents, but you must still be in melee range for them to be effective. Of these melee weapons, the pan not only deals the most damage but when equipped it can also block bullets for your character.

Weapon attachments, such as muzzles, extended magazines, grips, and scopes are also found on the map. Each gun has unique attachments that they are able to utilize. Attachments on weapons do not take up any inventory space.

Backpacks, vests, and helmets are graded level 1, 2, or 3. Level 3 is the most desired, as they allow more loot to be picked up and prevent more damage than levels 1 or 2.

The final type of loot to pick up are healing items. Medkits, first aid kits, and bandages all restore missing health after a brief delay. Painkillers and energy drinks also restore health over time and give you a speed boost. Bandages and first aid kits only get you up to about three-quarters of your health, so painkillers and energy drinks or a med kit is required to restore full health.

Combat in PUBG functions like most shooter games. Shots to the head deal increased damage, while limb shots deal less than to the body. Different weapons deal different amounts of damage. Depending on the weapon, you can scroll through single fire, burst fire, and auto fire when shooting your guns.

As you loot and engage in fights, you must remember that there is a blue circle closing in throughout the game, called the playzone. Players caught outside of the safe zone take damage, increasing as the circle gets smaller throughout the game. Your map will tell you where the next safe zone will be so you can move in advance of the circle closing in.

There are vehicles that spawn on the map that you can use to move faster, including motorcycles, cars, buggies, jeeps, vans, and boats. Vehicles do however make more noise and can be destroyed, creating a blast zone around them.

Throughout the game, airdrops will be flown in. These crates have special weapons and gear to reward those that go after them on the map.

There is a red zone that appears in small sections of the map. After an initial warning period, the area of the map is bombarded and players without cover may be taken out from above.

After a player dies in-game, all of the loot on that player is left by the dead body in a crate. You can walk up to the crate and take whatever loot you can carry for yourself.

When shooting at long distances, it is important to remember that there is bullet drop in the game. You may also need to lead your shots if a player is running away at an angle.

In squad or duo games, players are first knocked out before dying if they have a teammate still alive. Players knocked out can be revived by their teammate before they take fatal damage. If a player is the last left standing on the team, fatal damage will instantly kill that player and any of his or her knocked out teammates. In solo games, all players die instantly upon taking fatal damage.

If by nine circles there are still players on different teams left standing, the playzone will restrict to the center of the final circle to force a final engagement to decide the game. The last team left standing is awarded the chicken dinner and wins the game.

Who are the Best Teams?

Oh My God – The Chinese squad OMG is one of, if not the best, FPP teams in the world. After taking first at the 2018 PUBG China Pro Invitational, OMG continued that success against the best teams in the world. OMG finished first at the 2018 PUBG Global Invitational FPP and fifth in TPP. OMG are known for finding isolated battles and aggressively attacking enemy squads.

Team Liquid – One of the best teams in Europe, TL is also one of the most balanced teams in the world. After taking first in Europe, Team Liquid finished second in both TPP and FPP at PGI 2018. TL have exceptionally talented fraggers with an aggressive mindset.

Welcome to South Georgo – WTSG debuted at the 2018 European PUBG Global Invitational and finished second behind TL. Like TL, WTSG was consistent across both TPP and FPP and finished third in the world in both perspectives. Despite being a relatively new squad, WTSG is already a global force in PUBG.

Gen.G Gold – The most dominant TPP squad at PGI 2018, Gen.G Gold placed first in TPP, and a ninth-place finish in FPP was still enough to finish among the top half of the best squads in the world. Gen.G Gold are an elite team in terms of tactics, shown by their top placings in TPP.

Who are the Best Players?

Yao “lionkk” Hao – The most impressive player at PGI 2018 in terms of pure slaying prowess. Lionkk not only led PGI in FPP kills with 34, he dwarfed the competition, with the next closest being his teammate xiaohaixxxx with 19.

Injae “Esca” Kim –  Esca is the main fragger for the best TPP team at PGI 2018. The art of racking up kills changes in TPP versus FPP and Esca is currently one of the best in the world in both perspectives.

Jord “Ibiza” van Geldere  – Most of the Team Liquid players could make a claim for a spot, but Ibiza showed out as the most consistent player at PGI 2018. Ibiza was the only non-OMG player to finish top five in kills and survival time in FPP at PGI.

Michael “Shroud” Grzesiek – Shroud is the most popular PUBG streamer but also one of the most talented players in the game. A former professional CS:GO player for Cloud 9, Shroud is the most feared public match player and performed well individually in the Charity Showdown at PGI 2018.

Where/How do I Watch?

PUBG events and player streams are most commonly found on Twitch, as well as the official PUBG Youtube channel.

What are the Biggest Events?

PUBG Global Invitational – 20 teams made their way through a regional qualifier tournament to fight on the world stage against the other top teams in the world in both FPP and TPP.

Hong Kong PUBG World Invitational – 16 teams across the world have been invited to fight it out in a tournament in Hong Kong.

Auzom – Hosts multiple leagues based on region, including a Premier league featuring North America and Europe.

PlayerUnknown's Battlegrounds
Share
Michael Plant has been playing League of Legends since 2010 and analyzing it nearly as long. More recently, he's been interested in the developing PUBG and Fortnite scenes. When he's not playing or watching video games, he's more than likely following one of his Houston sports teams.