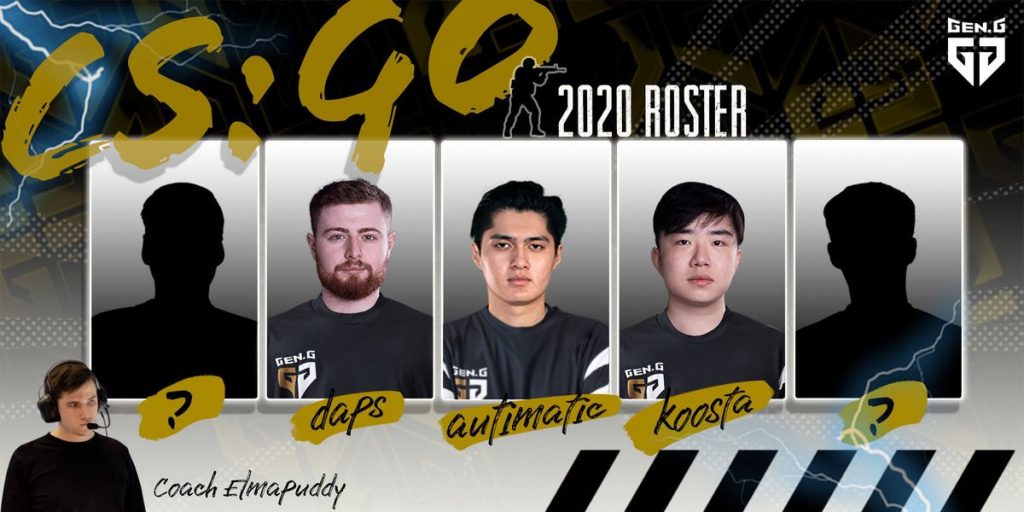 autimatic, koosta and daps have been enlisted as Gen.G’s founding players (Image via Gen.G)

Gen.G have officially announced its entry into Counter-Strike with the signing of Cloud9’s former core players.

We are honored to join the CS:GO community and welcome three veteran players as the core of our CS roster.

Two more players will be announced in the coming weeks.

Our goal is to bring home another Major to North America #WeAreGenG pic.twitter.com/uHELzido7q

Timothy “autimatic” Ta, Kenneth “koosta” Suen, and Damian “daps” Steele have been enlisted as Gen.G’s founding players, the Korean organization has announced. The team’s head coach Chris “Elmapuddy” Tebbit will also be following his former Cloud9 members over to their new home.

Bubblings of Gen.G’s possible foray in CS:GO with the Cloud9 roster began roughly a month ago following a report by Dexerto. Autimatic’s exit will end a nearly three-and-a-half year-long tenure with the North American organization; he will also be the last member from the ELEAGUE Boston Major winning roster to part ways with the team.

As for Cloud9, the team still retains Óscar “mixwell” Cañellas and coach James “JamezIRL” Macaulay. Although, there is no update on whether or not the organization will move forward with Tyson “TenZ” Ngo, who has been sidelined since late-October.

“We are honored to join the CS:GO community and welcome three veteran players as the core of our CS roster,” the organization wrote. “Our goal is to bring home another Major to North America.”

The remaining two players have yet to be announced, but will be revealed: “in the coming weeks.”