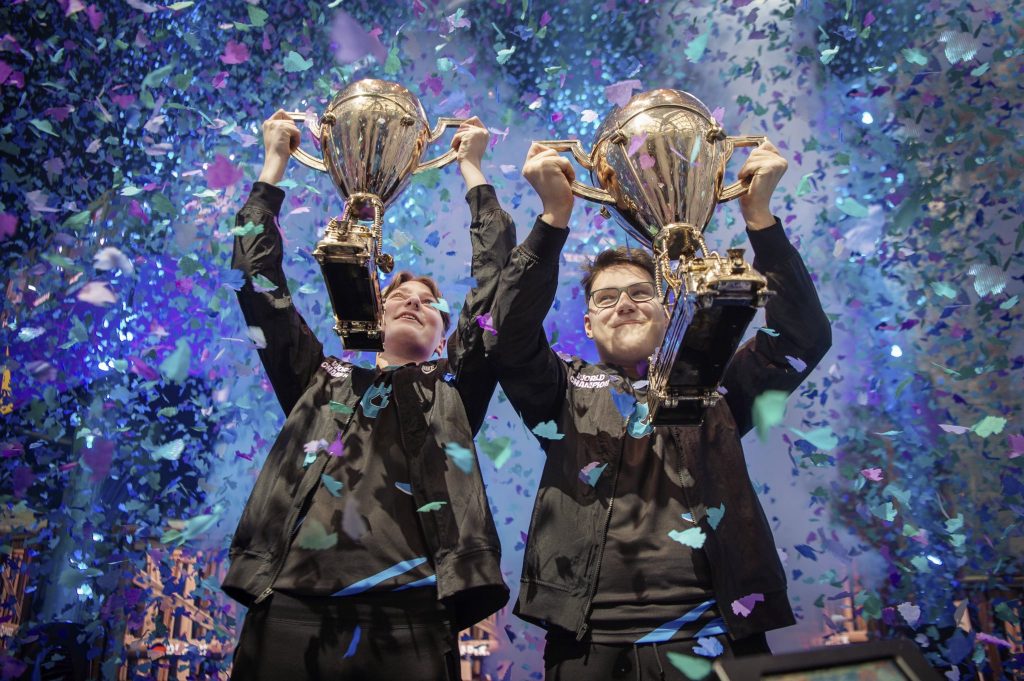 Over one million people tuned in this past weekend to see the best Fortnite players go head-to-head for a share of a record-breaking $30 million prize pool. The tournament was full of epic plays, big upsets and even a special DJ Marshmello set.

Top winners included Cooler Esports’ Emil “Nyhrox” Bergquist Pedersen and David “Aqua” Wang who picked up the win in the Duos Finals and Sentinels player Kyle “Bugha” Giersdorf who took home the Solos trophy. All first-place winners were awarded $3M USD in prize money, making them amongst the highest earners in esports history.

The Duos Finals saw Rocco “Saf” Morales and Williams “Zayt” Aubin start out with an impressive win. The pair were one of the favorites going into the event after securing previous wins at the Summer Skirmish and  ESL Katowice Royale. However, the tournament took a turn when Aqua and Nyhrox took impressive back-to-back wins in game four and five. The duo’s use of high-ground advantage saw them take full control of the final circles.

The final game saw Zayt and Saf with a small three-point advantage over second place, however, the duo wasn’t able to find the momentum to pick up additional points. It was Aqua and Nyhrox eight place finish and six elimination points that secured enough points to find themselves at the top of the leader board.

In their post-game stage interview, Aqua reflected, “We legit had the worst start ever, the first three games were awful and then I don’t know what happened. We just popped off”. When asked what set them apart, Nyhrox commented: “I think it’s the amount of hours we put into this game and how serious we take it”.

Bugha kicked off the Solos Finals in true style after a Battle Royale sent him straight to the top of the leader board with a dominant 19 points. After his first win, the 16-year-old never left first place securing multiple kills every single game.

The last game saw Bugha at 47 points with his nearest competitor Pslam trailing behind on 32 points. Bugha knew that a top place finish was all he needed to take home the ultimate prize – and that is exactly what he got. The final game saw Bugha top the leader board with 59 points, an incredible 26 points over second place.

“Words can’t even explain it right now, I am just so happy. Everything I have done, the grind, its all paid off. It’s just insane.” Bugha told the crowd.

In second place was Harrison “Psalm” Chang whos win in game four saw him move up four places on the leaderboard. His consistent eliminations saw his placement uncontested over the next two games, taking home $1.8M in prize money. Also noteworthy was Thiago ‘King’ Lapp who at only 13 years old takes home $900K in winnings. King secured a fifth-place finish after high kill games and taking down the likes of Turner “Tfue” Tenney.

Earlier in the weekend, the Creative Finals saw team Fish Fam pick up the main prize. Among the team was FaZe’s Cizzorz, who is known for creating the infamous death run maps which inspired the entire creative movement. Other members included HiImTylerH, ZAND, and Suezhoo.

The tournament which was split into four unique games, named sets, saw points awarded based on performance. Fish Fam came 1st for game 3 and game 4, which also saw them awarded a silver and gold llama, bringing their total winnings to $1.3M.

The Celebrity Pro-Am saw Airwaks & RL Grime take home the top prize with $1M to be donated to their chosen charity. Top Fortnite personalities Tfue, Courage JD, Cloak and Symfuhny all came in the top ten. Ninja and Marshmello narrowly missed out on a top ten spot with the duo needing one more point to meet the threshold.