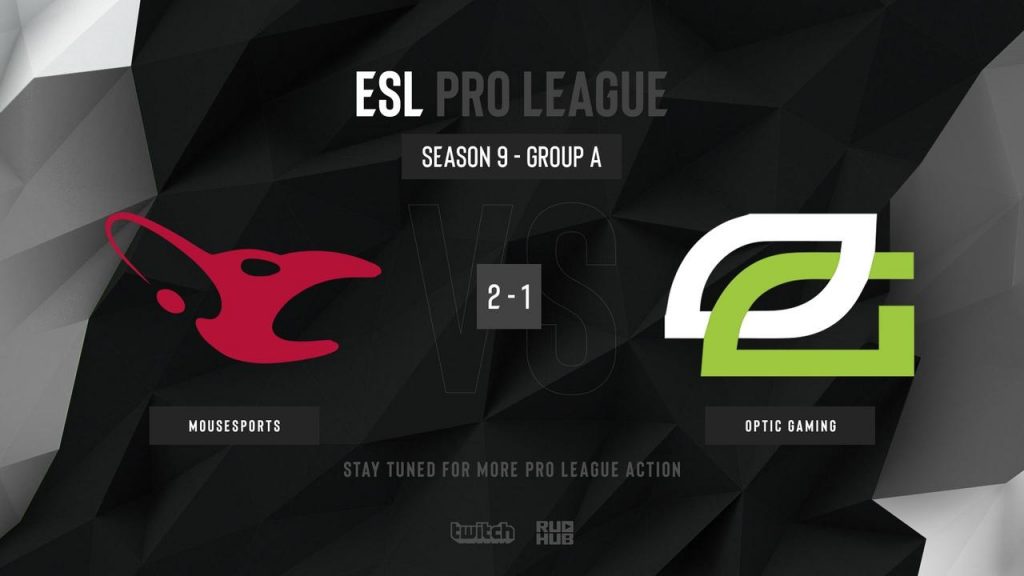 Mousesports and OpTic Gaming saw victory in the conclusion of Group A for CS:GO’s ESL Pro League Season 9 European Division. Mousesports finished first in the group and thereby automatically qualifies for the ESL Pro League Final in Montpellier, France, to compete for a prize pool of $750,000 USD. OpTic Gaming finished second and move on to round two.

This new format sees OpTic Gaming battle with North and two other teams from another group. If OpTic finishes first or second, they qualify for the ESL Pro League finals to join Mousesports.

Although considered to be the favorites going into the Group A matches, Mousesports looked incredible, only dropping a single map to OpTic Gaming out of their three matches. Mousesports managed to win all of their matches, beating OpTic Gaming, ex-Space-Soldiers and North.

The addition of Finn “karrigan” Andersen as the new in-game leader has seemed to take a burden from Chris “chrisJ” de Jong, especially with his performance against ex-Space Soldiers. ChrisJ managed to clutch a 1v2 on the second half pistol round to further bolster the team’s performance and lead them to victory.

However, this team is still going through a “honeymoon” phase due to the roster being extremely new. In this phase, new teams play extremely well, then after some time, the roster’s results begin to slow down. Additionally, Mousesports have not yet played against the highest level of competition in the League and will need to prove that their gamble has paid off. So far, it looks like it has.

We are pleased to announce the addition of Mathias "@MSLcsgo" Lauridsen and Nikolaj "@OfficialnikoCS" Kristensen to our CSGO roster.#GREENWALL pic.twitter.com/oQ0vOKjhVx

The team has been relatively consistent across all of its players. For example, the in-game leader duties set on Marco “Snappi” Pfeiffer in the previous OpTic lineup did not allow him to play how he wanted on the map. He played in a way that allowed superstars such as Kristian “k0nfig” Wienecke to shine, and his own statistics would take the hit. However, these duties have now been shifted to Mathias “MSL” Lauridsen, who played with k0nfig during their successful run on Dignitas.

Both teams have undergone roster changes, affecting not only the players but the structure of both teams.  Considering both OpTic Gaming and Mousesports are in the process of rebuilding, it’s impressive they’ve both managed to have successful stints in the first round of the ESL Pro League Season 9 European Division.

Time will tell if these rosters have what it takes to challenge for championships.

To watch OpTic Gaming and Mousesports in the ESL Pro League for season 9, you can catch them live on twitch.tv/esl_csgo.