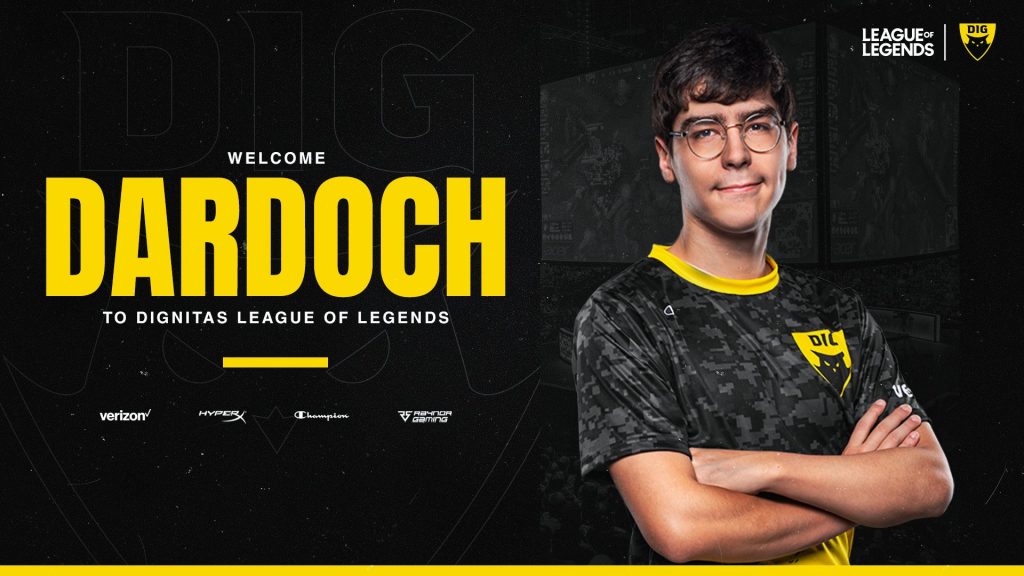 Dardoch joins Dignitas ahead of the return of the LCS on June 12th. (Photo courtesy Dignitas)

Joshua “Dardoch” Hartnett has left TSM to join Dignitas for the upcoming LCS Summer Split season. The jungler departs TSM after a dramatic few weeks with the team.

The TSM roster had mixed results throughout the season, but ultimately finished 4th place in the Spring Playoffs. With the result, TSM made several roster changes, including the signing of Yiliang “Doublelift” Peng. The signing came with backlash after a potential conflict of interest, as Doublelift’s stream picked up a conversation that TSM President of Esports, Leena Xu, was having that confirmed Dardoch would be leaving TSM. The speech detailed how TSM intended to bench Dardoch and that nobody wanted him. The drama forced TSM owner Andy “Reginald” Day to release a statement regarding the situation.

However, this drama seems to have not cost Dardoch his LCS opportunities, as he is now with Dignitas. Whether he is the starting jungler or not is uncertain. Dignitas’ Academy team does have an open position after Jonathan “Grig” Armao left the Academy for Team Liquid Academy. Matthew “Akaadian” Higginbotham was the starting jungler for Dignitas when the team promoted him to the starting roster on March 6th. Dignitas have plenty of time to decide who will start on Dignitas’s jungler position or if the role will be shared between the two.

We're powering up for the Summer Split.

Meanwhile, TSM is still on the hunt for a new jungler. It could be possible that Mingyi “Spica” Lu moves from TSM’s academy to the main roster, but they could always bring in another import with their freed-up import slot. Keep your eyes peeled as both Dignitas and TSM finalise their LCS rosters.

The LCS returns on June 12th with the revitalized Monday night league moving to Friday night.