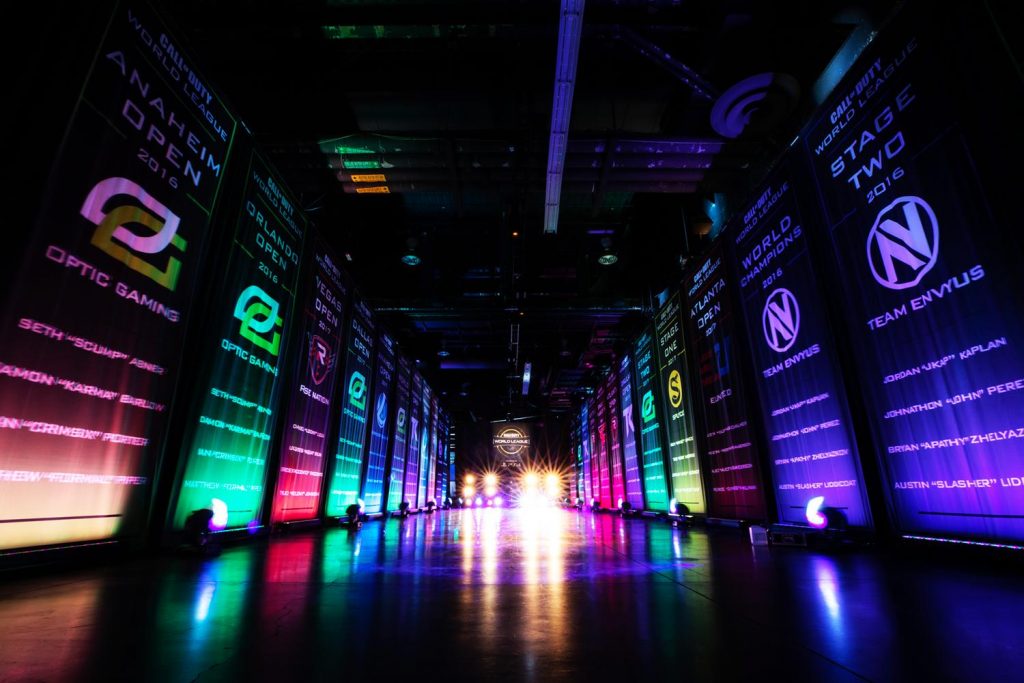 100 Thieves have a chance to claim their back-to-back-to-back three-peat title in Miami this weekend. Image via MLG.

The second-to-last event of the 2019 Call of Duty World League season is here, with 16 teams set to descend on the Miami Beach Convention Center from July 19-21. There, the world’s best Call of Duty rosters will battle in the CWL Finals for a slice of the $1.25 million USD prize pool, and the Pro League title.

There’s a clear frontrunner coming into the Miami tournament – 100 Thieves. After reassembling their roster earlier in the year, and rounding out an already strong lineup with Austin “SlasheR” Liddicoat and Ian “Enable” Wyatt ahead of 2019, 100T marched to back-to-back victories at CWL London and CWL Anaheim.

Now the star-studded roster, led by All-Star Sam “Octane” Larew and former CWL MVP Kenny “Kenny” Williams, is in pole position for a potential three-peat. There are a few contenders on hand to stop their reign, however: Gen.G, OpTic Gaming and eUnited.

Battle for the throne at South Beach

With 100 Thieves’ current stranglehold on CWL titles, every other roster comes into major tournaments with one goal – knock the kings off their throne.

This weekend’s tournament at South Beach gives a perfect opportunity for that. 100T have proven they’re not invincible in the Pro League regular season, falling to Midnight Esports, Splyce and Evil Geniuses.

Perhaps the most important head-to-head record is held by eUnited. James “Clayster” Eubanks’ rising roster in the red and blue are the only squad to have defeated 100T twice in the season. Their 2-0 record came after a tight 3-2 battle in Week 3, and a more dominant 3-0 seven weeks later.

100 Thieves have momentum on their side after triumphs in London and Anaheim. Image via MLG.

The victories proved critical for eUnited. The 2-0 record separated the roster, who finished 18-4 after twelve weeks, by just a single game. 100T rolled out the end of their season with a 17-5 record, claiming second seed heading into Miami.

There’s also a grudge match brewing between the two teams. The 3-2 and 3-0 wins in the regular season are fine for eUnited, but 100T holds the bragging rights in the rivalry after defeating their NA compatriots 3-1 in the London final in May.

EUnited aren’t the only team capable of taking down 100T in Miami, however, with Division A’s first-seed OpTic Gaming (16-6 in the regular season) and second-seed Gen.G (15-7) both providing ample threat to Matthew “Nadeshot” Haag’s assembled CoD roster.

OpTic holds the better standing heading into the weekend’s three-day battle. Their 16-6 run in the regular season has earned them the right to play either Team Heretics, or a successful play-in team in the winner’s bracket.

As long as everything goes according to plan for 100T and OpTic, however, they have an early meeting planned in Round 3 of the winner’s bracket. That may play against OpTic, considering they failed to defeat 100T in both meetings this season. Without a handful of series wins to give them momentum, the Division A first-seeds may struggle.

Gen.G, on the other hand, may never meet 100T at all if they can’t fight their way through the lower side of the bracket. A grueling first fixture against third-placed Splyce (11-11) offers them a chance to face eUnited in Round 3.

Gen.G are hoping to go one better than their campaign in Anaheim. Photo by Alli Mullikin for Robb McCormick Photography https://www.robbmccormick.com

The North American team came close in Anaheim. A 3-0 loss to 100T in the upper bracket dropped them into a must-win match against OpTic that they cleared with a 3-2 victory. Improvements against 100T netted them a game win, but the back-to-back champions were too much as they clinched the 3-1 triumph at the Anaheim Convention Center.

With 100T, OpTic and eUnited all flying high at the moment, Gen.G’s main concerns come from the wild and strange roster swaps they’ve made over the past few months.

First, they brought Michael “Spacely” Schmale in as a substitute in April, before promoting him to the starting roster over Jared “Nagafen” Harrell days after Anaheim. Twelve days later, Nagafen returned at Spacely’s expense, and Spacely was loaned to Mazer Gaming.

While the moves don’t necessarily suggest there are ongoing problems behind the scenes for the team in terms of settled players – Nagafen really only spent two weeks away from the squad – it does speak volumes about the fact something may need fixing within the roster.

If Nagafen’s return has solved whatever Gen.G were trying to bandaid over, they may have a strong tournament in the lower half of the bracket. If the Spacely-Nagafen drama speaks of something worse brewing beneath, the roster may fall behind the other contenders in Miami.

Dominant teams lie in wait in the play-ins

There are two teams in the single-elimination bracket that could have finished as one of the top eight teams – Luminosity Gaming, and Team EnVy.

Both clocked up 8-14 records in their regular seasons, though that score punted Luminosity to seventh in Division A while the same win-loss kept EnVy in fifth place in Division B.

The other team quite likely to run deep in the play-in is Midnight Esports. The roster finished with a 12-10 record, equal to Team Reciprocity, and only missed out on stepping straight through to the final 12 thanks to a poor head-to-head record.

Midnight faces Elevate first off in the bracket, before a potential meeting with Luminosity in the second round. On the other side of the play-in format, EnVy faces cellar-dwellers UYU ahead of a potential major battle against Evil Geniuses.

Evil Geniuses are the final threat vying for one of the two qualifications spots in the main bracket. Boast stars like Dillon “Attach” Price, Lamar “Accuracy” Abedi, and John “Xotic” Bruno, EG’s roster is a top-eight squad trapped in the play-ins off a poor 8-14 record.

A disastrous Week 8 which saw them claim a 3-1 win over Midnight before losing to OpTic, FaZe, and Reciprocity waylaid their season. A 2-2 record with losses to Splyce and Enigma6 damned them to the lower qualification path.

Fans can watch the CWL Finals on official Call of Duty Twitch channels, as well as MLG’s website, and the in-game World League Hub in Black Ops 4.