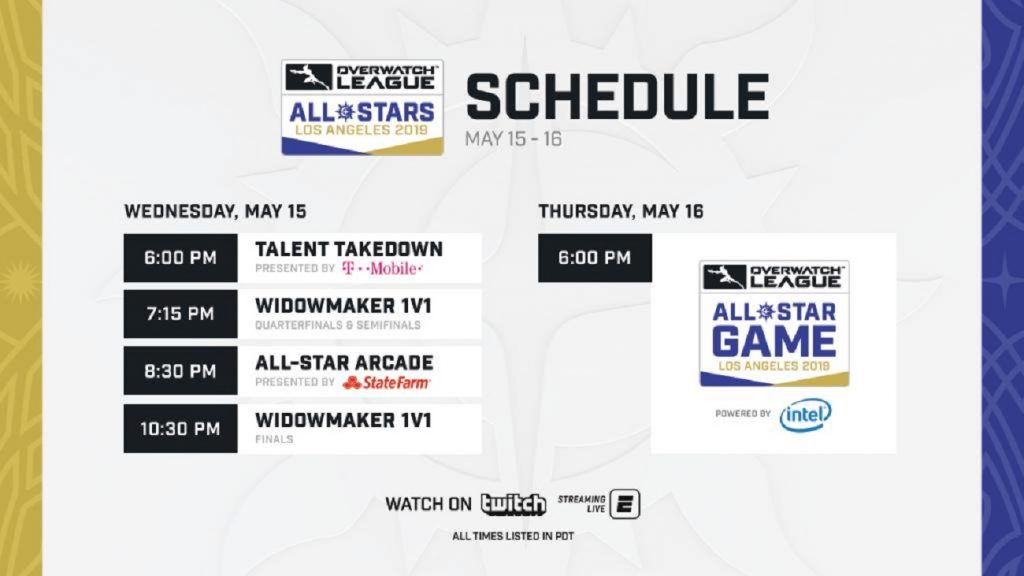 The Overwatch League All-Stars Los Angeles 2019 kicks off on May 15. (Image courtesy of Blizzard)

We’re just days away from the start of the Overwatch League All-Stars Los Angeles 2019. The event is full of exciting exhibition matches like the All-Star Arcade, the Talent Takedown, Widowmaker 1v1, and the epic Atlantic versus Pacific All-Star Game. With the event starting May 15, let’s take a look at what you can look forward to.

Votes are in for the All-Star Arcade maps, and unsurprisingly, some of the most interesting maps won. The four maps that were chosen are: Sibling Rivalry, Healers Never Die, Terrible, Terrible Damage, Keeping the Peace and, if necessary for a tiebreaker, Thanks but No Tanks. It’s going to be a wild game of All-Star Arcade and it’ll be interesting to see how the matches play out.

Earlier this week, the Overwatch League officially announced who the fans chose to start in the 2019 lineup for the All-Star game. Each fan who visited the Overwatch League site from March 27 to April 28 could vote on a roster of their choice to represent either the Atlantic and Pacific Division. Players were limited to drafting a roster that had two tanks, two supports and two damage dealers—say goodbye to the Vancouver Titans’ beloved 3:3 strategy or, at least, during the voting stage. Once the voting closed, the leaderboards remained up, clearly indicating which players had made the exclusive Pacific and Atlantic Division teams.

This year’s Atlantic Division lineup will feature two players from the New York Excelsior: the 2018 MVP winner Bang, “JJonak” Sung-hyeon and Widowmaker extraordinaire, Kim “Pine” Do-hyun. Joining JJoank and Pine will be their former NYXL support teammate, Hong “ArK” Yeon-joon from the Washington Justice. It should be noted Pine hasn’t played any maps this season for the NYXL, but his attendance of last year’s All-Star Game qualifies Pine for this year’s game.

Joining the JJonak, Pine and ArK is the Philadelphia Fusion’s tank player Gael “Poko” Gouzerch and his teammate, DPS player Lee “Carpe” Jae-hyeok. Both Fusion players will be returning for their second year participating in the All-Star Game. To conclude the Atlantic division lineup is first-time All-Star Game tank player Cameron “Fusions” Bosworth from the Boston Uprising.

These twelve players chosen by the community will be joined by twelve other players, “The Reserves,” who have been chosen by the Overwatch League coaches, players and staff members. The fan-chosen twelve players will be the starting line-up and can be subbed in for the main event but can also play in any of the Exhibition matches during the event.

It’s really good to see some Stage One and Stage Two champions on the Reserve teams after seeing how some were notably absent from the starting line-up. It’ll be interesting to see how these players compete together and whether we’ll see some interesting synergies emerge.

Be sure to check out the Overwatch League All-Stars Los Angeles 2019 this Wednesday and Thursday on the OWL’s twitch channel!