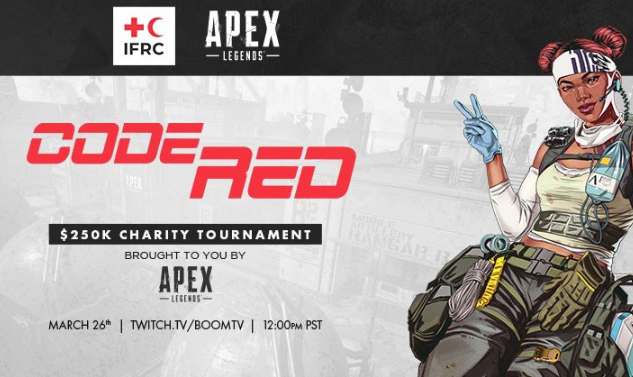 In the middle of the day Wednesday, BoomTV announced a $300,000 Code Red charity tournament that will take place Thursday, March 26th at 12 PM PST. $250,000 will be donated to the International Federation of Red Cross to assist their ongoing COVID-19 efforts.

$250k will be donated to @ifrc to support the ongoing COVID-19 efforts.

Catch all the action on our official Twitch channel below ⬇️ pic.twitter.com/Ki4kxuW5z5

BoomTV recently hosted a code green Call of Duty: Warzone tournament where top streamers competed for a $50,000 prize pool and fans were able to win a total of $20,000 throughout the stream. BoomTV changed the format of this week’s tournament to directly help the fight against COVID-19 virus which has brought most of the world to a standstill.

This week’s tournament will also feature big names in esports and streaming. A_Seagull is a former professional player for the Dallas Fuel who will be competing with Dummy who is also an ex-Overwatch professional. Other big names include LuluLuvely who is a Content Creator for NRG, and the whole TSM squad who have current North American champions of every official Apex tournament so far.

The tournament will feature six matches in total; three on Kings Canyon and three on World’s Edge. The Apex Legends player base seems to be divided on which map they prefer, so having both included will keep everyone entertained.

The COVID-19 virus has impacted everyday life for millions of people around the world. Thousands of people are now working from and practicing social distancing, while others are in lockdowns to help combat the spread of the virus. The gaming industry has been directly affected by the virus as several events and esports leagues have been canceled or postponed for public safety.

Most professional sports have also been canceled due to the virus, so people have turned to other forms of entertainment such as esports. Tournaments like the previous code green Warzone tournament attracted thousands of viewers, and the Code Red tournament will likely be the same.

Apex Legends fans can tune in Thursday at 12 PM PST on the official BoomTV Twitch channel.