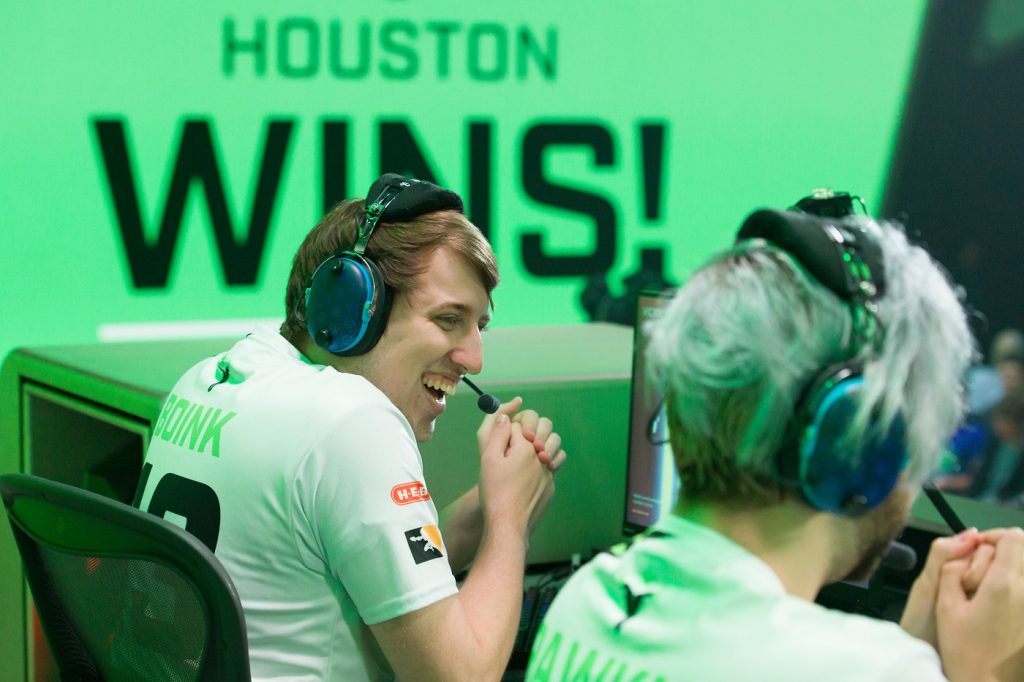 Daniel “Boink” Pence, the main support of the Houston Outlaws, shared key insights with Hotspawn on the evolution of the main support role in 2-2-2 role lock, how Overwatch’s latest hero Sigma may come into play in the Season Playoffs, and how his team’s trust and communication evolved over the 2019 season. While the Outlaws will have to watch the playoffs from home, Boink is looking forward to seeing how Sigma could impact the balance of competition.

Hotspawn: We’ve seen you and other main supports still play a lot of Lucio in the 2-2-2 role lock, but have you had to change how you approach certain situations strategically?

Boink: Definitely, I would say that before 2-2-2 I was locked into only two heroes pretty much. I was either playing Lucio or Mercy when our DPS was playing Pharah. Those were the best heroes, if you had a Brigitte or a Baptiste, most of the time they’d be played by your DPS/third support. Limiting yourself to two supports meant that my hero pool had to expand greatly. I’ve played almost every support in different situations besides Ana and Zen, those are mostly flex supports, so unless you wanted to run Ana and Zen together, you wouldn’t often see me on one or the other.

But I’ve now had to play Baptiste a lot, or play Brig against Dive so I have to think a lot more, because if we had needed a Brig, I couldn’t just go, “Jake, go Brig now, this is the best Brig time.” I have to do that. And my team’s been really good at helping me with that, because I haven’t had to swap heroes a lot. I know the general idea and I know how to play the heroes, but sometimes they’ll know we need a hero’s help and I might not realize I need to swap right away. So they’re doing a really good job of helping me.

Never wallow in disappointment when you know you've given it your all.

It sounds like there’s a lot of trust and communication. Did that evolve throughout this season which has had some difficult moments and also high points like the Stage 3 Playoffs?

I would say in Stage 2, everyone played for themselves. That was our worst stage, we were 0-7, swapped rosters a ton, it wasn’t good and no one really had trust in anybody. Then we had a long break in between the stages and had a group meeting, talked it out and aired all the problems that we had. Then we said, okay, this last stage can’t happen again. Even if we don’t make the playoffs, no one wants to play in that environment. It’s really bad to play in, it’s no fun, you aren’t friends anymore. It’s really hard to remain friends when things are going that badly, not even necessarily in the results, but in how we were playing and how we were treating each other.

So we ended up hashing it all out, getting rid of all the negative vibes, and focusing only on what was to come. We were able to change the team environment in only a week or two. And then we noticed we were having good results, we were putting in the right players, and everyone was trusting each other. Stage 3 couldn’t be worse than Stage 2. We just tried to change our mentality, trust was formed once we started playing better and talking about what we wanted to accomplish.

When you have time to explain things, like maybe you don’t do something that a teammate calls in game, and they explained what they wanted, you’re like, “oh, that makes sense.” Maybe if you don’t explain that, then the person won’t listen to your call next time. I think just everyone having open minds, trusting each other, generally being better friends and teammates, that helped us a lot.

Teams might have to rely on that open-mindedness as Sigma will be available in the Season Playoffs this year. Theory-crafting is exciting with his unique abilities, do you think he’ll fit in the 2-2-2 meta?

Most heroes don’t fit in for a while, specifically because it takes time for people to understand them. I think Wrecking Ball and Ana are the two heroes that you were able to use and figure out right away. Wrecking Ball was worse than Ana in terms of that he’s a highly mechanical character so it took time to learn him. But every hero has needed time for people to figure it out, finding out what it’s good or bad with, to do that, it needs to be able to be played in a tournament setting like Overwatch League.

Once Sigma is available in Overwatch League, you’ll see the level of play and ideas with him skyrocket. But until that moment, the pros say that they need to focus on the current tournament, and Sigma’s not a part of that. So we’ve been focusing entirely on no Sigma, and then as soon as he’s available, you focus completely on Sigma and realize where he’d be good and where he’d be bad.

Brig is a good example of this, where she was released for months, and then suddenly she was available for Stage 4 Season 1. She was used, but most of the balance patches were the same from the end of Season 1 to the start of Season 2. But the compositions she was in changed drastically. At the start, not a lot of people had enough time on Brig in order to realize which comps you could use with her and where she would be good.

It takes a lot of time to understand heroes as they come out, so I’m not sure you’ll see use right away, unless he’s overpowered. If that’s the case, you’ll see use because teams will figure that out right away. But if he’s good in say, a niche situation, or maybe he’s acceptable, or regularly balanced, I don’t know if you’ll see much play right away.

Disappointing season but it can definitely be fixed for next season. The off season should be really interesting

Would it be frustrating or unfair if he debuted during the final rounds of playoffs?

Unless he’s broken, that would be great. If a team wins because they abuse some unknown mechanic with him, then that looks bad [laughs]. But besides that fringe case, probably only 1% chance, that would be awesome to see him in the Overwatch League Finals.

The Overwatch League Post-Season begins August 30. Boink and the Houston Outlaws will return for Season Three in 2020.