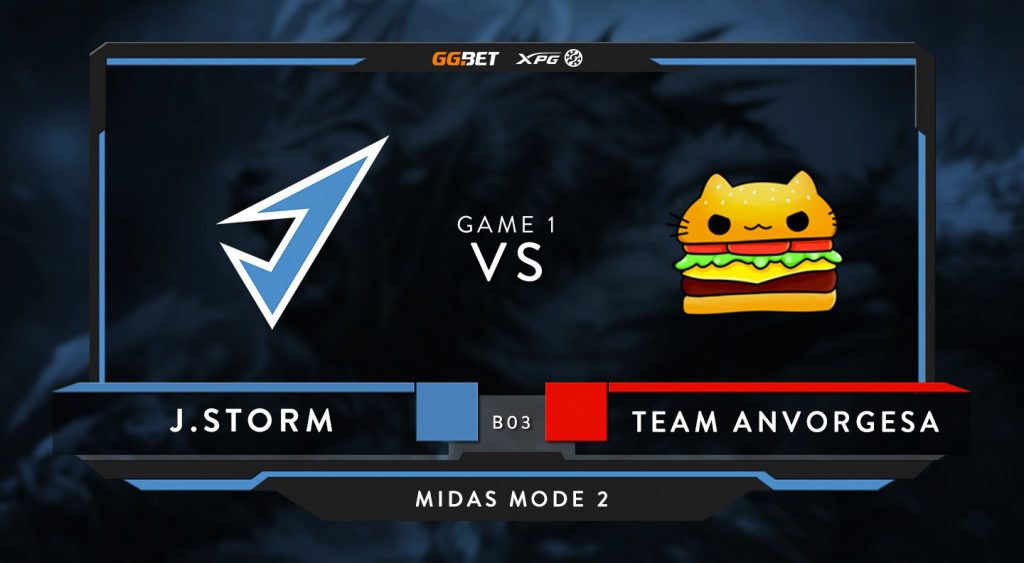 J.Storm will advance directly to the grand finals.

The second game of Midas Mode 2.0 Day Four pitted J.Storm against Team Anvorgesa, two of the strongest teams in the Americas bracket, fighting to secure a playoff spot. Anvorgesa had a great showing against Beastcoast yesterday, and now with Braxton “Brax” Paulson standing in for Roman “Resolut1on” Fominok on J.Storm, they had a chance to jump to the top of the standings.

From the outset, we saw a much more tactical draft from the teams, with J.Storm and Anvorgesa both attempting to counterpick with there 1000+ Moonbuck net worth. And as a result, we saw Anvorgesa’s Zeus countered by Pugna, and J.Storm’s Lycan countered by the Clockwerk. Otherwise, the draft was very standard, with Anvorgesa picking up the Broodmother, and J.Storm opting for an Undying.

Yet the serious draft, fed into a more relaxed start to the game, with both teams dancing in the mid lane, suiciding to Roshan, and otherwise messing around before the first creeps spawned. The early game was very back and forth, with neither team able to get a clear advantage, but as the game progressed, J.Storm started to take control, perhaps looking to redeem themselves after being eliminated from WePlay! Reshuffle Madness the day before.

Throughout the game, Anvorgesa’s seemed to have a number of connection issues, which gifted the audience with another fantastic MalwareBytes advertisement. However, the pauses and delays would also cost the Catburgers team a large amount of Moonbucks overall.

As the match continued, Anvorgesa managed to grab a farm lead, primarily on their Broodmother, but couldn’t win fights against J.Storm. Then, as if to add insult to injury, Anvorgesa was blighted with eight evil creeps, purchased by J.Storm. The audience-controlled minions proceeded to attempt to block the Brood’s farm, block lanes and escape routes, and generally cause trouble. Overall, this wrought havoc on an already lagging game which had to deal with extra spiders, zombies, Lycan wolves and now player creeps.

With all this chaos, J.Storm were able to dissolve away Anvorgesa’s gold lead and push into their opponents’ base. With little lockdown on the side of Anvorgesa, and only the Broodmother with a gold and item advantage, J.Storm closed down game one in a decisive fashion.

We were lagging too, don't worry.

After an obscene amounts of summons, we take game 1 vs Anvorgesa – GAAAAAAAAAA🍔💸

Entering the second draft, both teams still had decent net worth and as a result still picked some of the highest-cost champs. And having lost their last game, Team Anvorgesa were happy to spend a lot of money on their draft, picking up the Earth Shaker, Pugna, Bounty Hunter, Weaver, and Slardar. While J.Storm, on the other hand, picked as many custom skin heroes as they possibly could, grabbing the Sun and Gun Witch Doctor and the ESL Kunkka.

Kicking off the game, Anvorgesa looked desperately to grab any advantage they could, stacking on runes and trying to set up a tri-lane. And, despite being blighted by more expensive pauses, the Catburgers were able to grab an early lead with their early game power. Four minutes in and Anvorgesa’s connection issues continued, with Jean Pierre “Chris Luck” Gonzales disconnecting, while across the map, the teams engaged in back-and-forth fights.

With the match progressing, J.Storm once again found themselves in the driving seat, as the Kunkka dominated the Bounty Hunter mid, and the side lanes quickly found leads. And although Anvorgesa would pick up one or two kills in the jungle, by 15 minutes, J.Storm had double their kills, and 3k gold advantage.

At 19 minutes in, Sir Sadim’s evil, audience-controlled minions, once again took the field against Team Anvorgesa, and promptly failed to block a creep wave. Shortly after, half of them met their end at the hands of J.Storm’s Kunkka. And taking advantage of their lead, J.Storm also picked up the trivia challenge, correctly answering Storm Spirit to the question of “what hero has an attack range of 480.”

J.Storm has been one of the best performing teams in this tournament without a doubt. They looked dominant in every game they’ve played, even against their most significant competition yet in Team Anvorgesa. They’ll be given the top seed in playoffs. For the Catburgers, they too advance to the playoffs thanks to the untimely departure of beastcoast from the event and will be eager for another chance to face J.Storm.