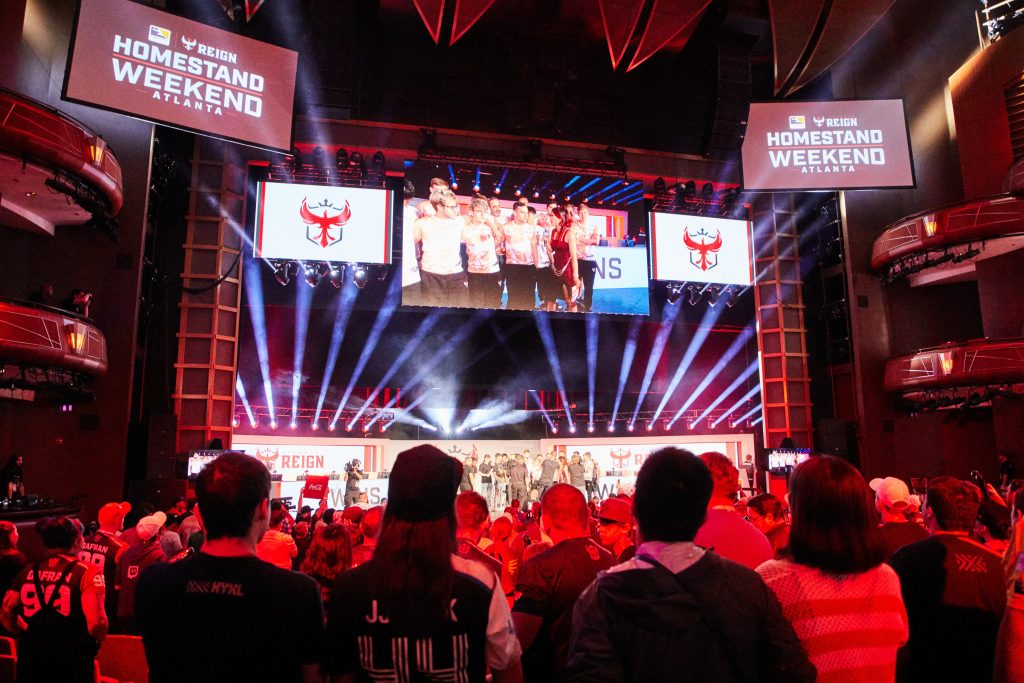 This weekend, we had the Atlanta Homestand Weekend. Eight teams from across the League traveled to the beautiful southern city of Atlanta, Georgia. With supportive fans, activities for Overwatch enthusiasts to partake in all weekend long and some fantastic Overwatch, Atlanta’s Homestand Weekend set the bar high for home games.

The New York Excelsior went into the Atlanta Homestand Weekend sitting in a comfortable number one position in Stage Three. They had an easier weekend in Atlanta than some of the other teams, but that didn’t mean that the NYXL didn’t give it their all to make their fans proud. NYXL’s match against the Florida Mayhem on Saturday gave the audience, and fans, pause during the second map when Florida was able to take a tie from the Atlantic superstars. It wasn’t quite the win the Mayhem were looking for on Volskaya Industries, but it was a step in the right direction against the Atlantic Division titans.

On Oasis, Eichenwalde, and Havana the New York Excelsior showed absolute perfect form with stellar attacks and uncompromising defenses. The Florida Mayhem were a little out of their depths against the NYXL but they gave it their all and showed that they are learning from their losses and slowly becoming a better team.

The NYXL continued their dominance against the eastern-most Canadian team – the Toronto Defiant. Toronto seemed a little demoralized from their game against the Reign as they weren’t able to pick up a single map win. They were able to secure a point on Horizon Lunar Colony and two points on Numbani but in the end, it just wasn’t enough. It was a disappointing loss for the Defiant, but the win secured NYXL as the top team in Stage Three with a perfect 7-0 record. The team from the city that doesn’t sleep has shown that they clearly have a winning strategy for the regular stage games. Whether they’ll be able to push past their habit of choking during the playoffs is something we’ll just have to wait and see.

The famous red and black expansion teams faced off when the Toronto Defiant met the hometown heroes the Atlanta Reign for Atlanta’s first game in their home city. This duo faced off for the first time back in February when the Reign confidently stole a win from the Defiant with a solid 3-1 victory over the Canadians. This rematch wasn’t going to steal a Stage 3 Playoff spot, but it was a grudge match that the Canadians wanted to win.

The Reign and Defiant started their rematch on Oasis. It was a disappointing map for the Defiant with both the City Center and the Gardens quickly going to the Atlanta. On City Center, the Reign had Andrej “babybay” Francisty absolutely dominate with Sombra with an eager Dusttin “Dogman” Bowerman on Moira cleaning up the Defiant. With the percentage slowly ticking up, it was impossible for the Defiant to even touch the center without losing half their team. Reign ended up claiming the City Centre 100% to 0%. In the Gardens, the Reign managed to keep the Defiant off the point until a beautiful six man EMP by Andreas “Logix” Berghmans made it possible to take out half of the Reign’s lineup and then flip the point – just when the Reign were at a dangerous 96%. Unfortunately, it was a short-lived capture, and the Reign reclaimed what was theirs with a brilliant shatter to win the point 100% to 32%.

The Defiant played around with some interesting hero compositions on Volskaya Industries seeing a Torb, Mei, Orisa, Mercy, Widow and Roadhog. It was met with a ever-changing Reign lineup that had a Moira, Tracer, Hanzo, Widow and even Hammond at some points. Defiant held the Reign back on the Reign’s attack to deny them a single point and when it flipped to the Defiant, they were able to secure one point with an incredible Barrage from Pharah. Defiant won their first map to tie the game going into half-time.

The @ATLReign pull ahead in the Match of the Week! #ReignAtHome #OWL2019@DogmanOW is fired up! Are you!? 🔥

On Eichenwalde, the Defiant secured both points giving hope to Toronto fans that they could potentially pull off a series claim win. The Defiant were unable to hold the Reign back, and it was a very dominant and very quick point two and subsequent point three. Even with Toronto’s latest pickups, Toronto’s defense is still unable to effectively hold the Reign back. Atlanta only had one shot at getting a fourth point to win Eichenwalde but it was all they needed in the end.

On Dorado, Defiant’s weaknesses were showing when their lack of defensive coordination allowed Atlanta to get all three points and bank a lot of time. On Defiant’s attack, they were able to push the payload all the way to 2.57m from the third point. Being denied their third, and much-needed point, they fell to Atlanta.  It was a sweet moment for the Reign holding the Defiant from that last point and securing their first Stage Three win – and denying the Defiant their revenge win. Hopefully, we’ll see the red and black teams face off again next stage to see if Defiant can take a win off of their expansion team rivals.

On Sunday, the Philadelphia Fusion and the Shanghai Dragons faced off for the ultimate decider match to see who would make it into the Stage Three Playoffs. After The Dragons loss to the Guangzhou Charge, they were sitting in a dangerous eighth place – one loss away from having their Playoff dreams snatched away. The Dragons were hungry for their second stage playoffs. The Fusion were eager to reclaim their former glory and prove their team still has it. With a lot on the line, this match was a fan-favorite for everyone watching.

The two started their series on Ilios where Sado had a fantastic map on Winston. There’s one clutch moment when Su-min “SADO” Kim popped Winston’s Primal Rage, and he got pushed off the map. Thankfully due to the decreased cooldown for jump in Primal Rage, he was able to jump back up and get a kill. The Dragons seemed to have forgotten the objective was to touch the point and the Lighthouse went to the Fusion 100% to 0%. Talk about pulling a Cloud9!

On the Well, the Dragons claimed the point 100% to 0% in overtime with a stellar last snipe by Min-seong “diem” Bae to kill the Diva. The Ruins was a tense game that pushed the point to 99% for both teams, but beautifully timed Self-Destruct by Envy in Overtime saw the Dragons claiming the point and the map.

Volskaya Industries was a hard map for both teams with the Dragons and the Fusion finding success on their attacks. Fans of the game, and Fusion players, learned very quickly why Diem is such a beast on Widowmaker. Both teams finished the map with two points apiece and the map went into overtime. Shanghai was able to secure both points again and had an utterly brilliant time sniping Fusion players out of the sky. The Dragons held the Fusion on point two at only two ticks out of the three necessary to tie the map and the Fusion lost the map. Jae-hyeok “Carpe” Lee might be a good Widowmaker but Diem truly showed who the better Widowmaker was.

Hollywood was a great map for the Fusion but it wasn’t an easy win. The Dragons had the first attack and unsurprisingly secured all three points – even after an extremely tight overtime win. On Fusion’s attack, they ran a Hazno, Widowmaker, and Roadhog – all of which made huge impacts on the game. Boombox on Roadhog was refreshing to see as the damage output and ability to pick off backliners is seriously unstated. Fusion finished the map with a lot of time in the bank, and we moved into a second round of attacks. The map was ultimately lost by the Dragons when they did not step on the point. Philadelphia just walked in and took it in the second round of attacks.

On Dorado, the Coma and DDing PharMercy combo was a lot for the Fusion to handle. The Fusion ran a Widow and PharMercy of their own but it wasn’t enough. Shanghai pushed the payload to the final push and it looked like they couldn’t be stopped until Carpe’s Widowmaker took out four players within seconds of each other to pause the push. It was enough to withhold the last point from the Dragons and the offense switched to Fusion. Everything was resting on Fusion’s attack, but they crumbled under the pressure. Without being able to secure even the first point, the Shanghai Dragon’s successfully landed themselves their playoff spot!

With Stage Three finished, our top eight teams look to the Stage Three Playoffs. The teams fought hard this Stage, and it is clear that the lower ranked teams are trying their best to make changes, create synergy and make the big plays to help them improve their overall League standing. Keep an eye out for the Stage Three Playoffs Preview this week and don’t forget to tune in on Thursday to the Overwatch League on Twitch!