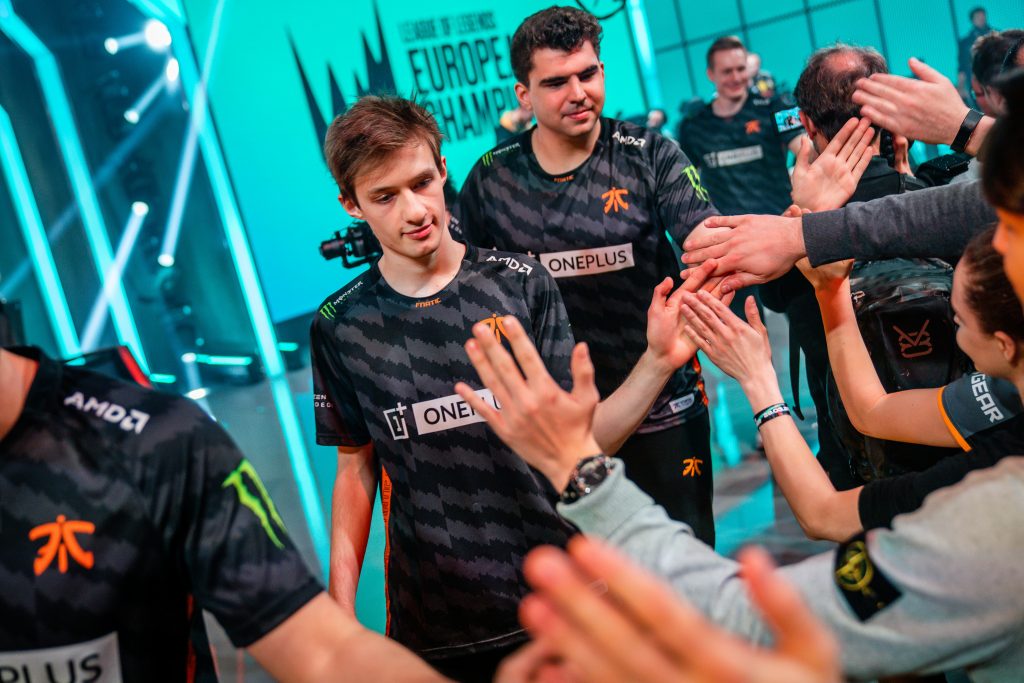 The opening round of the 2019 LEC Spring Playoffs is in the books. Fnatic swept Team Vitality 3-0, while Splyce beat SK Gaming 3-1. Splyce and Fnatic will now meet in round 2 on April 5 to determine who will move on to face the loser of G2 Esports and Origen in round three.

Rookie mid laner Tim “Nemesis” Lipovšek had big shoes to fill after the departure of Rasmus “Caps” Winther in the offseason. Could he perform at a top level on the big stage?

The answer was a resounding yes in the series-clinching win for Fnatic against Team Vitality. They were pushing for a dominant end to the series when Nemesis put the icing on the cake with an incredible pentakill. Nemesis marched past Team Vitality’s double nexus turrets to destroy them on their own fountain:

Game three was the first of the series in which Fnatic won the early game. Mads “Broxah” Brock-Pedersen’s Rek’Sai was active early in securing First Blood on Daniele “Jiizuke” di Mauro’s Yasuo before assisting Gabriël “Bwipo” Rau’s kill on Lucas “Cabochard” Simon-Meslet’s Jayce. Fnatic picked up the first seven kills of the game before Team Vitality responded with their own kill.

It was the least competitive game of the series as Fnatic grew more dominant with each game. The final tally showed 27-kills-to-7 for Fnatic in a sub-22 minute win.

An early bot gank from Lee “Mowgli” Jae-ha’s Jarvan IV secured First Blood for Team Vitality in game two. Mowgli participated in Vitality’s first three kills as they jumped out to an early lead. Fnatic fought back by utilizing Broxah’s Karthus ultimate on back-to-back plays to catch Team Vitality off guard. That was the second consecutive game that keeping track of his cooldown was an issue for Team Vitality.

Team Vitality started the series off strong again in game one. Mowgli’s Jarvan IV secured an early infernal drake and First Blood from a top dive on Bwipo. However, their next top dive attempt didn’t go so well. Cabochard’s Lucian thought he had the solo kill top, but Bwipo used his Stopwatch to buy just enough time to live.

Broxah’s Karthus ultimate finished Cabochard off for the turnaround kill, but that wasn’t all. Mowgli then tried to kill Bwipo under tower but Jakub “Jactroll” Skurzyński’s Braum pulled off and left Mowgli alone to die after Mowgli missed his flash combo.

Without pushing an early advantage, Team Vitality could not stand up to the scaling of Fnatic. The pure damage from Gangplank, Karthus, and Vayne supplemented by the team fight utility of Lissandra and Alistar proved too much for the Lucian, Jarvan IV, and Taliyah top side of the map that must snowball to be relevant. Bwipo’s sharp plays early kept Fnatic close, and that was enough for them to cruise to the win. Fnatic won the opener 19-kills-to-8 in 34:35.

Nemesis finished his first playoff series with a combined 18/4/25 K/D/A.

Three infernals and two mountain drakes on the enemy team? No problem for Splyce in their series-clinching game four win over SK Gaming.

Oskar “Selfmade” Boderek’s Rek’Sai engaged on Splyce at 35 minutes, but his controversial Infinity Edge build didn’t give him enough tankiness to survive for long. Splyce turned the fight around, picking up three kills for zero, Baron, and their first real gold lead of the game.

It were SK Gaming who took game 1 in the series opener. Selfmade’s Jarvan IV performance was a reminder of why he’s the rookie of the split in the LEC. He finished a deathless 3/0/11 as the main engage for SK Gaming, participating in 14 of the team’s 19 kills.

Crownshot’s Ezreal supplied the damage, dealing 40.2k to Splyce over the course of the 41 minute SK Gaming win. Jorge “Werlyb” Casanovas contributed a solo kill top lane on Hecarim and finished with a 5/2/3 K/D/A.

Splyce had another long fight on their hands in game two to even the series. They picked up the early kills on a nice 3-for-1 fight bot lane early, but SK Gaming had the better of the map play to secure Baron at 25 minutes. SK Gaming then knocked down their first inhibitor of the game at 29 minutes and it was up to Splyce to hold on.

Hold on Splyce did. SK Gaming pushed top lane just a bit too far at 31 minutes, allowing for a flash engage from Tore “Norskeren” Hoel Eilertsen’s Rakan. His damage dealers did the rest and Splyce won the fight 4-kills-to-1.

Now late enough into the game to have core item builds, Splyce had the superior late game with Azir and Xayah. A final Baron fight at 45 minutes confirmed that as Splyce picked up three kills, the objective, and the game.

Splyce were comfortable all the way in game three. Though SK Gaming picked up two infernal drakes, they never managed to push down a single turret in Splyce’s 26-minute win. Kobbe’s unconventional Vel’Koz (1/0/3) pick will give Fnatic something to think about in the next round but was rather inconsequential to the outcome of the game. Tamás “Vizicsacsi” Kiss’ Jayce finished 3/0/3 to put Splyce on match point.

MVP candidate Kobbe finished the series against SK Gaming with a combined 24/9/27 K/D/A.