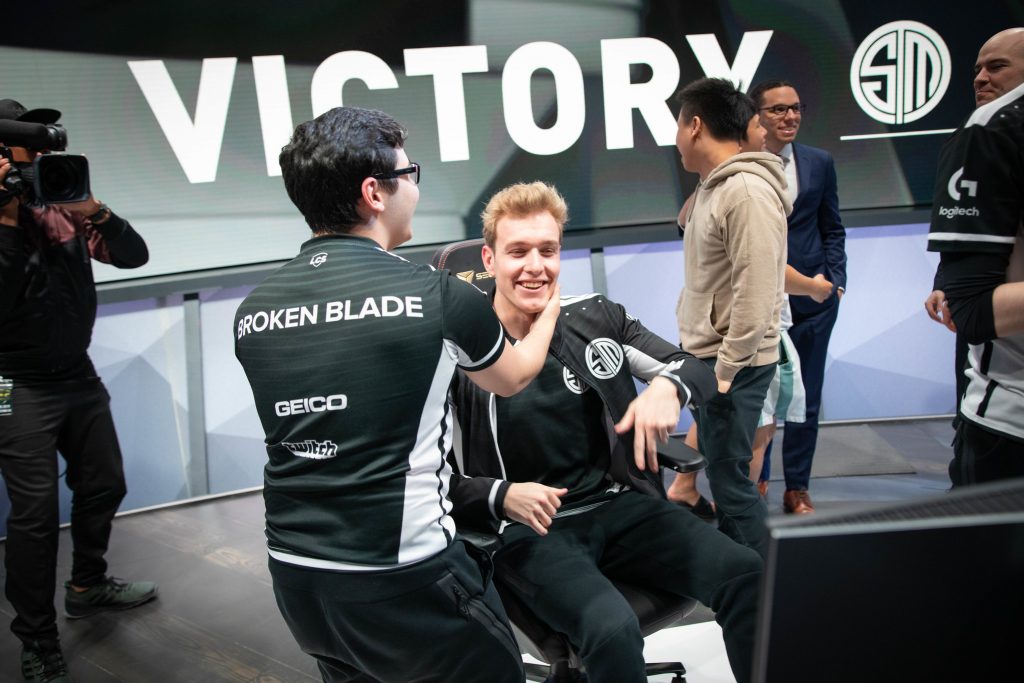 TSM advance to the Finals in the LCS Spring Playoffs 2019. (Photo courtesy of Riot Games)

The second round of the 2019 LCS Spring Playoffs is complete. Team SoloMid reverse swept Cloud 9 3-2 to advance to the Finals. Team Liquid dominated FlyQuest 3-0 to earn the other spot in the Finals. The two teams will meet Saturday, April 13 at the Chaifetz Arena in St. Louis, Missouri.

Team SoloMid solved their struggles against Cloud 9. After losing their first four games of the season to C9, including the first two of this series, TSM won the last three games to advance 3-2.

Cloud 9 busted out Taric and Sona bot lane for game one. It didn’t look great early as Jesper “Zven” Svenningsen hit a great Condemn in lane to pick up First Blood and was allowed to free farm as Vayne. But the power of the picks showed up later.

The poke from Søren “Bjergsen” Bjerg’s was rendered useless by the dual healing capabilities of the duo. Zven was constantly at risk of being one-shot by Yasin “Nisqy” Dinçer’s Zoe or Dennis “Svenskeren” Johnsen’s Hecarim and couldn’t get enough damage off in fights.

Sergen “Broken Blade” Çelik’s Akali kept TSM in the game by soloing Eric “Licorice” Ritchie’s Poppy in lane and cleaning up skirmishes, but C9 were eventually too strong in team fights. C9 took Baron at 26 minutes, chasing three kills afterward to seal the deal. C9 were able to close the game out in that final push, winning 11 kills to 5 in 27 minutes.

The start to game two was heartbreaking for TSM. Broken Blade’s Kennen roamed bot early to help the team secure the 7 minute Ocean Drake for laning. C9 were content to let the objective go, offering only a token steal attempt from behind the wall. Except that Nisqy’s Tormented Soil actually stole the drake from TSM. TSM had bursted the drake down to 100 hit points, and Matthew “Akaadian” Higginbotham’s Jarvan IV was unable to secure it with Smite.

Cloud 9 dominated the rest of the game from there. Svenskeren’s Rek’Sai heavily out-jungled Akaadian, who was still reeling from the early drake play. Svenskeren finished 4/0/4 in Cloud 9’s 12-kills-to-4 win, again in 27 minutes.

TSM, and Akaadian specifically, finally showed signs of life in game 3. Svenskeren attempted to lane gank Broken Blade’s Jayce just before 12 minutes, but Akaadian’s Gragas was there in time to turn it around. Broken Blade picked up First Blood in a carry lane and Akaadian finally had a reason to gain confidence in the series.

The rest of the game turned into the Bjergsen show. He reminded everyone once again why he’s the best mid laner in North America after a shaky start to the series. He perfectly played around Nisqy’s Zilean ults to make sure that Zachary “Sneaky” Scuderi’s Jinx could never comfortably deal damage in fights. Bjergsen finished 9/0/6 in TSM’s 19-kills-to-6 win in 44 minutes.

Emboldened by the success of game four, Akaadian popped off in TSM’s game four win. He out-paced Svenskeren at every turn, including turning around an early mid gank in TSM’s favor. Akaadian would go on to finish 8/1/6 for participation in 14 of TSM’s 16 kills.

Cloud 9’s Zed pick into Zoe didn’t pay any dividends for the team. Nisqy was constantly thwarted on his all-in attempts by Andy “Smoothie” Ta’s Galio ultimates. C9’s inability to get Nisqy rolling early meant he was ineffective for the entire game.

With their season on the line, both teams went with interesting jungle picks to start their game five drafts. Cloud 9 opted to take Rek’Sai away from Akaadian with the first pick of the game coming off his great performance. TSM responded by putting their faith in Akaadian, picking him Kindred with Braum and Zilean enablers. That faith in Akaadian from TSM paid off in a big way.

TSM picked off Svenskeren at 38 minutes and melted Baron courtesy of Akaadian’s on-hit Kindred build. The team then marched top lane, determined to push as a full team instead of sending a member to split-push. Cloud 9 engaged on TSM, trying to preserve their last standing inhibitor turret, but they had no way in. Smoothie’s Braum blocked Licorice’s Ornn ult, Bjergsen’s Zilean ulted Akaadian’s Kindred, and C9 had no way to burst out TSM before they could respond.

TSM kited backwards, allowing Akaadian, Sven’s Ezreal and Broken Blade’s Vladimir to shred through the team. After working through C9’s front line, C9’s back line exploded. TSM scored a full five-man ace for none, easily pushing their way to the Nexus and the series win. The final score for TSM was 15-kills-to-10 in 40 minutes. Bjergsen’s Zilean, though playing a supporting role, finished 4/0/9 in the series clincher.

In addition to securing their spot in the Finals against Team Liquid, TSM also earned an invite to 2019 Rift Rivals with the win. Cloud 9 will also represent North America at 2019 Rift Rivals, as they are higher seeded than fellow semifinalist runner-up FlyQuest.

Team Liquid, like G2 Esports, showed teams and fans that their late season struggle had no carryover effect in a 3-0 sweep over FlyQuest.

Photo courtesy of Riot Games.FlyQuest put pressure on Team Liquid in game one. They took the first infernal drake spawn of the game and picked up an early kill on Nicolaj “Jensen” Jensen’s Jayce. Rookie of the split Omran “V1per” Shoura’s Irelia had the perfect teleport flank at 23:45 to round up an overextended TL. He ended up picking up a quadra kill while Eugene “Pobelter” Park’s Zoe tracked down the final kill for the ace.

But even with that win and the resulting Baron, TL were able to wrestle back control. Yiliang “Doublelift” Peng and Jo “CoreJJ” Yong-in played the Sona/Taric combo and made it so that the Zoe pick didn’t matter as the game progressed. Instead, it was Jensen’s Jayce poke that stuck to FlyQuest, allowing TL to control zones of the map — especially Baron pit.

That poke led to an uncontested Baron take for TL at 38 minutes. FlyQuest were caught in no-man’s-land — too far for a steal, but too close to get away afterwards. TL ran them down with their Sona and Jayce speed-ups and finished the game on that push. TL won the opener 15-kills-to-12 in 39 minutes.

Game two was not as closely contested. Team Liquid thwarted Lucas “Santorin” Tao Kilmer Larsen’s attempts to snowball mid, Jung “Impact” Eon-yeong’s Jayce predictably smashed V1per’s Akali in lane, and TL were fortunate enough to have three consecutive infernal drakes spawn with their early advantage. TL didn’t even make use of the third, instead opting to brute force the end of the game through top lane at 24 minutes. They were ahead by 8K gold and up eight kills to two as it ended.

Team Liquid had no trouble closing out the series in game three. They again picked up two early infernal drakes and cruised to a victory. As icing on the cake, Jensen highlighted why he was brought on to replace Pobelter by solo killing him for First Blood at five minutes. His dominance mid was a large catalyst for TL’s early success throughout the series. TL eventually closed it out after consecutive skirmish wins up 13 kills to 4 in 31 minutes.

Team Liquid advances to the Finals to face TSM for the Spring Split Championship and a spot at the Mid-Season Invitational on the line. FlyQuest just missed out on qualifying for 2019 Rift Rivals and won’t be on stage again until the beginning of the 2019 Summer Split.