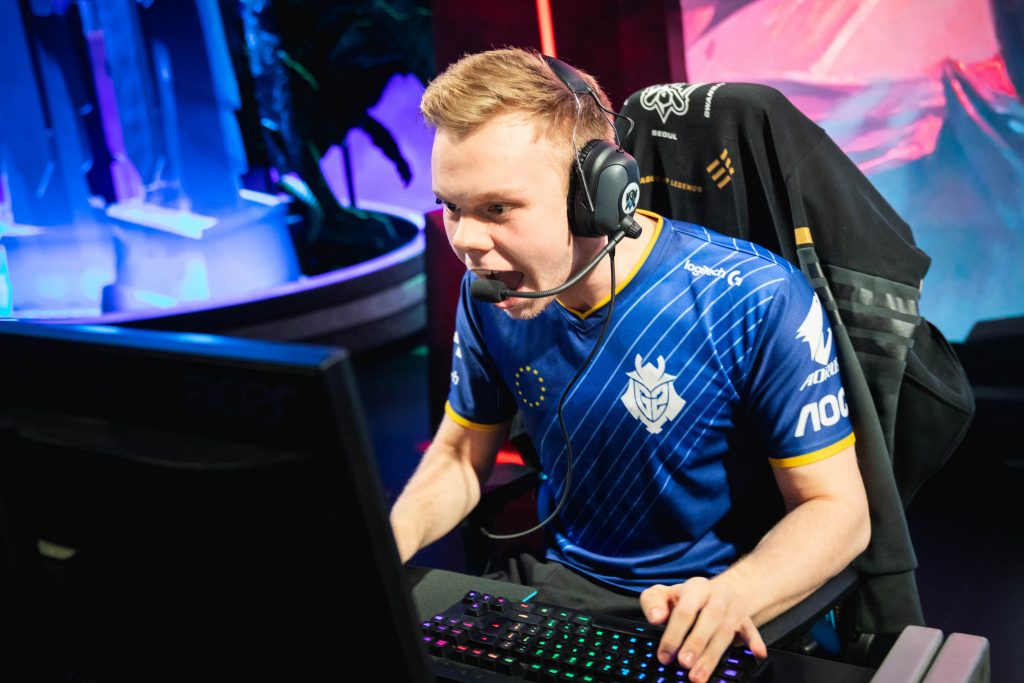 G2 shocked the LoL community with their upset victory over powerhouse RNG in the quarterfinals.

In a wild first day of quarterfinals, tournament co-favorites Royal Never Give Up and KT Rolster went home early in game 5 stunners. G2 Esports and Invictus Gaming will meet up in the semifinals of the 2018 League of Legends World Championship.

Uzi was supposed to be the best player at Worlds 2018, but he was not the best player in this series. Perkz was absolutely dominant in the winner-take-all game 5. G2 left him the final pick in the draft and he opted into Leblanc, taking the volatile skill matchup against Ryze. With an early gank from Jankos’ Olaf, Perkz was off and running, finding solo kills across the map. Most importantly, he took Uzi out of the game with his kill threat and Royal Never Give Up had no answers. Perkz finished with an 11/0/4 K/D/A in G2’s 39-minute win to advance to the semifinals. Uzi was held to 2/5/4 on Sivir.

Game 2 was the most closely contested of the series. The gold was near even when Royal Never Give Up picked Wunder’s Akali at 27 minutes and made their way toward Baron. Perkz held Royal Never Give Up’s attention long enough without dying on Irelia that Wunder was able to teleport back in time for G2 to win the fight 5 kills to 1. With Baron, G2 took a 4k gold lead and were able to split-push their way to a 35-minute win.

Uzi was put on a scaling champion in Kai’Sa in game 3, but the early results were the same. Despite getting First Blooded in his own jungle before minions spawned, Uzi picked up a 2v2 kill in lane on Wadid’s Braum at level 2. He then built himself a comfortable 60 CS lead in lane and G2 never recovered. Uzi went a combined 9/1/5 in the two Royal Never Give Up wins.

Game 4 was an absolute route by G2 to even the series. Jankos’ Nocturne answered every play by Karsa’s Taliyah early and G2 were already up 11.2k gold at 24 minutes after taking Baron. Perkz and Wunder built 100 CS leads and G2 conceded only 1 kill and 1 turret in their 30-minute win.

3.5k gold separated Invictus Gaming and KT Rolster 32 minutes into the pivotal game 5. KT Rolster found a pick onto Baolan’s Alistar and tried to push forward against Invictus Gaming. Seeing the overextension, JackeyLove made his move. His Xayah flashed forward, killing Score’s Taliyah with one auto attack. He then found Deft, Mata, and Smeb for the quadrakill in the decisive fight of the series. Invictus Gaming won the fight 5 kills to 2 and used the fight win to take Baron and take down tournament co-favorites KT Rolster.

Invictus Gaming almost won the series in a clean sweep. Already up 2 games to 0, Invictus Gaming’s TheShy was an unstoppable force split-pushing on Fiora. KT Rolster took Baron and were pushing 4v4 at 40 minutes while Smeb’s Irelia attempted to hold TheShy from taking KT Rolster’s own base. KT Rolster made the decision to dive Invictus Gaming’s double Nexus turrets while Smeb tried to cut TheShy’s minion wave. TheShy forced Smeb away while KT Rolster won the 4v4 fight 3 kills to 2. Smeb teleported to join Ucal and Score while TheShy tried to finish KT Rolster’s Nexus first. The 3 man squad of KT Rolster were able to destroy the Invictus Gaming Nexus two auto attacks before TheShy could finish in one of the craziest endings to a League of Legends game all-time.

Then KT Rolster had finally looked in control of the series after game 4. Duke was subbed in for TheShy and Smeb took advantage. Ning’s Camille came top for a gank at 7:30, but Smeb’s Irelia made a huge outplay, expertly using disarm on both enemies to pick up a kill and get away safely. KT Rolster showed impeccable macro and won 7 kills to 2 in 36 minutes, holding a 9 turrets to 1 lead.

Invictus Gaming picked on KT Rolster’s Kai’Sa priority in the first two games of the series.
Despite incredible scaling, Kai’Sa’s weak early game was taken advantage of and Invictus Gaming came out ahead in the early skirmishes. Deft was held to a K/D/A of 4/5/5 in these two Invictus Gaming wins. TheShy’s Urgot got ahead early and dominated game 1 with a 6/1/8 score. Rookie had his fun in game 2, turning in an 8/1/7 performance on Galio.