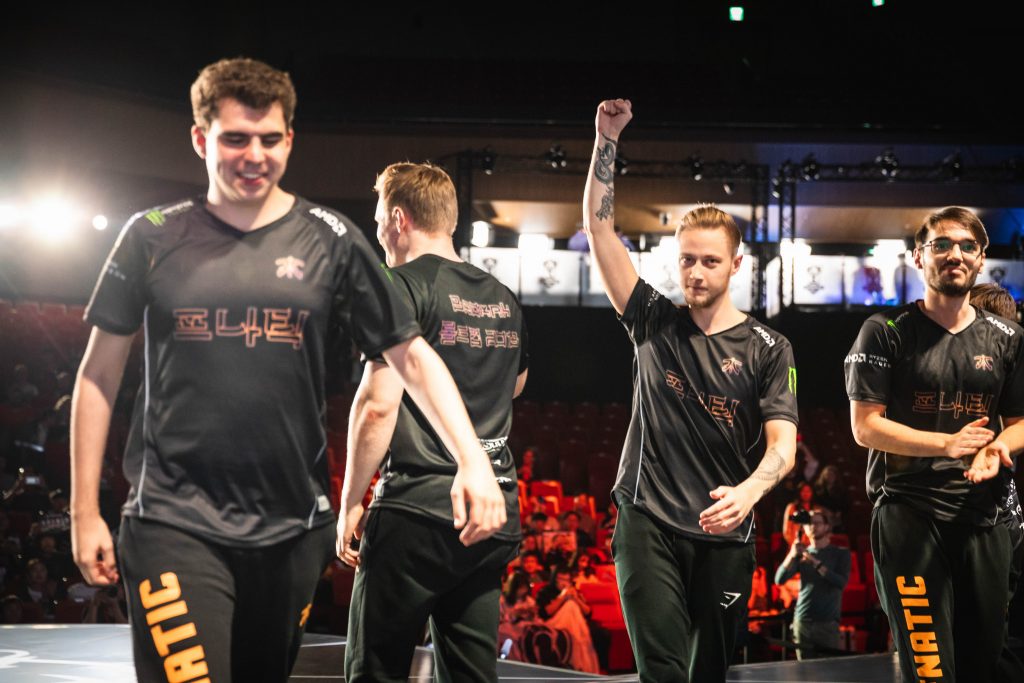 Rekkles and Fnatic put on a dominant performance during the final day of the group stages.

The final day of the Group Stage has finished and heavy favorites Fnatic and Invictus Gaming are on their way to the quarterfinals. Here’s what happened and what we learned about the teams today.

Fnatic avenged their round 1 loss to Invictus Gaming by defeating them twice in round 2 to claim 1st in Group D.

Fnatic v 100 Thieves: Fnatic outclassed 100 Thieves from the start. Broxah’s Lee Sin had a highlight First Blood on Ryu’s Lissandra and every early skirmish went the way of Fnatic. Fnatic played around Baron well and 100T had no avenues back into the game after going down 7,684 gold by 25 minutes. Fnatic won 14 kills to 4 in 32:20.

Fnatic v G-Rex: Stitch held his Heal in a bot lane 2v2 that cost G-Rex First Blood, and Fnatic opened with 3 kills to 1 across top and bot lane. Fnatic won and held priority in all 3 lanes and GRX never seriously threatened. Fnatic took Baron at 22:20 for an 11.5k gold lead and closed the game out in 24:35.

Invictus Gaming v Fnatic: Fnatic took the first 4 turrets of the game off of an impressive early game start. Up 3k gold and with TheShy’s Fiora split-pushing, Fnatic started Baron at 25:40. Invictus Gaming contested but Fnatic routed IG, picked up 4 kills for 0, secured Baron, and boasted a 6k gold lead. Fnatic marched into IG’s base and closed it out immediately, winning 15 kills to 4 in 28:43.

Fnatic v Invictus Gaming (Tiebreaker): Fnatic held only a 1k gold lead at 24 minutes when a fight kicked off around Infernal drake. Fnatic secured their 2nd Infernal, 3 kills, and transitioned to Baron for a 4k gold lead. Fnatic secured the next Infernal as well to take all 3 and Invictus Gaming were never able to fight back as their base slowly crumbled to Fnatic in 36 minutes.

While they will be happy to advance, Invictus Gaming have left themselves a tougher task in the quarterfinals after falling to Fnatic for 2nd place in Group D.

G-Rex v Invictus Gaming: The Camille and Galio combo worked well for Invictus Gaming in their win over G-Rex. Duke’s Urgot held a large CS lead over PK’s Aatrox all through laning phase and was too much to handle for GRX in the side lane. IG cruised to a 13-kills-to-5 win in 25:32.

100 Thieves v Invictus Gaming: Ryu’s struggles in the 1v1 continued as Rookie’s Ryze solo killed Ryu’s Lissandra at 4:25. Playing as Kai’Sa and Leona against Xayah and Rakan, Invictus Gaming’s bot lane still managed to dominate a losing lane matchup to the tune of a 30 CS lead by 8 minutes. IG won a team fight 4 kills to 1 at 18 minutes and eventually closed the game out after 29 minutes.

Neither 100 Thieves nor G-Rex came particularly close to upsetting top teams Fnatic and Invictus Gaming. 100 Thieves took the consolation prize of two wins over G-Rex for 3rd place in Group D. G-Rex became the 2nd LMS team to finish 0-6 as the region does not have a single team advance to the quarterfinals.

G-Rex v 100 Thieves: Although they weren’t competitive with the top teams, 100 Thieves were clearly a step above G-Rex. AnDa picked up 3 kills in the first 4:30 and GRX could not keep up with the early pressure from 100T. AnDa finished the game with a 12/2/13 K/D/A on Taliyah and 100 Thieves finished with a 27 kills to 9 advantage to close out Worlds on a positive note.