Yuyanjia: “I Think All the LPL Teams are Pretty Evenly Matched.” 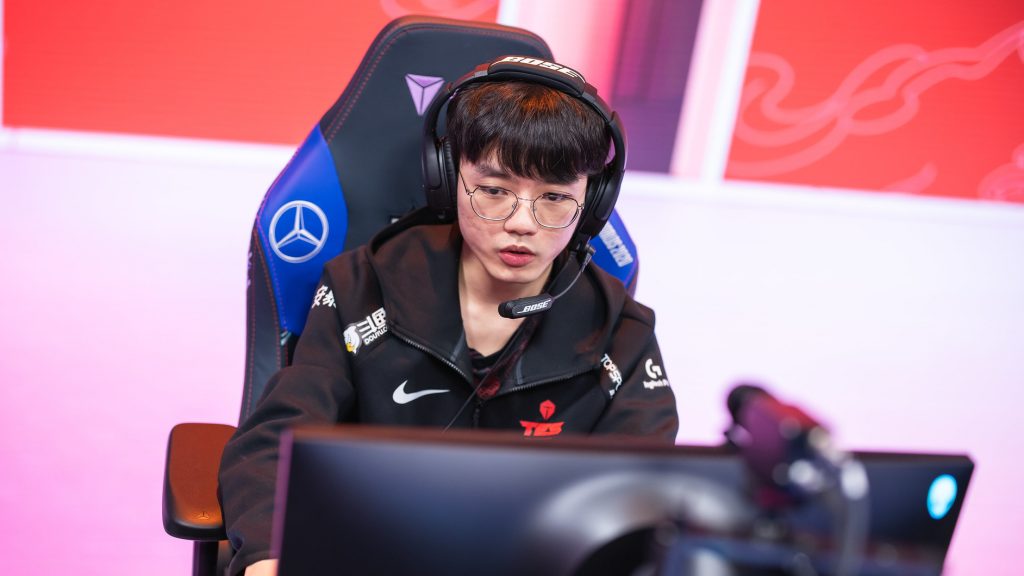 According to almost everyone’s expectations, Top Esports has advanced to the Knockout Stage of the League of Legends World Championship. The champions of the LPL dropped only a single game in the Group Stage and looked as strong as many had hoped they would. Now the true challenge begins for the team: the Knockout Stage. In their first best-of-five, Top Esports will meet Europe’s second seed Fnatic to determine who advances to the semi finals.

At the end of the conclusion day for Group D, Top Esports’ support player Liang “yuyanjia” Jia-Yuan talked to us about the all-important day. He shared his thoughts on the tense rematch he played against DRX and how he feels about his performance overall. yuyanjia also told us how his debut at Worlds is going so far for him, and which teams are looking especially scary heading into the Knockout Stage.

Hotspawn: Welcome yuyanjia and congratulations on getting first in your group today! How are you feeling at the moment?

yuyanjia: At the moment I’m feeling pretty good because we did manage to be the first seed in our group.

Hotspawn: Heading into the tournament, did you expect to end as first seed?

yuyanjia: We surely expected to finish first. We had a pretty good performance in the first run, so that’s why we thought we would get first.

Hotspawn: The last game you played today, against DRX, was really close for a long time. Was the match as tense for you as it felt for the viewers?

yuyanjia: So, actually, our draft had an advantage when it came to scaling in the game. Because DRX did get some advantages with their draft early, we were trying our best to avoid teamfights and just wait for our carries to reach their power spike.

Hotspawn: Since this match determined who would be the first seed of Group D, did you feel a lot of pressure facing DRX?

yuyanjia: I did not feel that much pressure. We were already sure to get out of the group. So the match wasn’t as important as the other matches we played today. But yes, we surely wanted to get this win because we really wanted to get first seed.

Hotspawn: Are you happy with your performance today?

yuyanjia: I actually feel pretty good about today’s performance overall. But there was the one game against FlyQuest where we lost because we didn’t do a great job in the early game.

Hotspawn: I’m interested in hearing from you, as a person. How is it to play at Worlds for you?

yuyanjia: I actually don’t feel a lot of emotions right now. During Worlds in general, actually. I just try to be as neutral as possible about it.

Hotspawn: Your lane partner, JackeyLove, is a veteran on the international stage. Is he helping you in any way with playing at Worlds?

yuyanjia: In our free time he shares his experience in terms of the mentality and the mindset you need to have before and during the game. In-game, he is a really good player so I don’t need to worry about him at all.

Hotspawn: Looking ahead: at this moment, we’re still waiting for the Knockout Stage, but are there any teams you want to face?

yuyanjia: I did look at some matches before, and my best hope is that we will not meet any teams from the LPL.

Hotspawn: Are you impressed by the performances of the LPL teams then? Have you had time to watch their matches at Worlds?

yuyanjia: I’ve watched every game they have played. I think all the LPL teams are pretty evenly matched. So it would be a pretty spicy fight if we met them in the quarter finals or even in the semi-finals. But I just don’t want to meet JD Gaming at all. I think the LPL teams did a great job, but I don’t want to disclose a lot about it.

Hotspawn: Looking at the LEC and LCK teams that made it through, are there any that stand out to you?

yuyanjia: I don’t think there is a single weak team in the top eight. They’ve already gotten so far, after all. But I think our strongest opponent would be DAMWON Gaming.

Hotspawn: How are you going to prepare for the Knockout Stage? Will you take some rest, or are you going straight back to practicing?

yuyanjia: Well, we have three days of break until we play our next match. We will just do our preparation as usual and work on our mentality.

yuyanjia: So, we actually made a lot of mistakes during the scrims. I think we just perform better in the ‘real’ matches. Still, there are a lot of mistakes that we need to improve on. But again I don’t think I’m able to say a lot about it.

Hotspawn: Perfectly understandable. To round up: do you have any words for the people who are supporting Top Esports?

yuyanjia: Thank you everyone for supporting us. We have already gone so far, and we are going to try our best during the quarter finals and the other matches we will play.

Top Esports’ next match will be played against Fnatic on October 15th at 12 p.m. CEST.