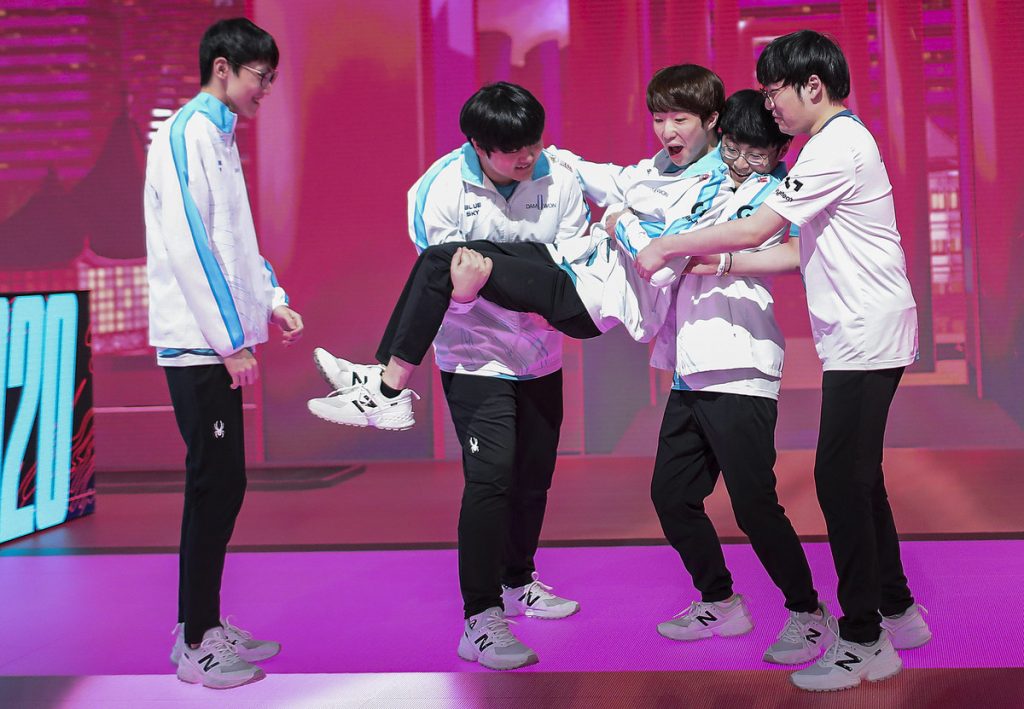 The semifinals of the 2020 World Championships have concluded. DAMWON Gaming got their revenge on G2 Esports with a 3-1 win, while Suning upset Top Esports 3-1 in the other semifinal to set up an LCK versus LPL matchup in the Finals. We take a look at the top storylines of the World Championship so far.

DAMWON GET THEIR REVENGE ON G2 ESPORTS

The storyline was set after the quarterfinals. DAMWON Gaming, one of the tournament favorites, looking to extract revenge from G2 Esports for their exit from 2019 Worlds. Meanwhile, DAMWON were just another obstacle in G2’s attempt to build on last year’s runner-up finish. While DWG spoke of revenge throughout the year, G2 made light of the budding rivalry. Heading into the matchup, top laner Martin “Wunder” Hansen said of DWG: “I don’t think DAMWON is really a threat to us. We usually beat all the Korean teams anyway, so that’s my take on it.”

That attitude might be changing after DAMWON Gaming took down G2 3-1 to head to the Finals. DWG opened the semifinals with start-to-finish dominance in game one. Both Jang “Nuguri” Ha-gwon’s Gangplank (4/0/12) and Jang “Ghost” Yong-jun’s Jhin (6/0/9) went deathless in the opening 22 kill to 6 win in 28 minutes. G2’s bot lane was held to a combined 0/7/7 score in the loss.

To their credit, G2 fired right back to even the series up at one game apiece. Using the global pressure from Rasmus “Caps” Winther’s Twisted Fate (6/2/11) to team up with Wunder’s Camille (4/2/7) and Mihael “Mikyx” Mehle’s Leona (3/1/11), G2 controlled the map. Marcin “Jankos” Jankowski’s Kindred (5/1/9) controlled dragon, allowing G2 to spring ahead when they captured Infernal Soul at 26 minutes. They took game two 25 kills to 8 in 33 minutes.

After a suspect draft in game two, DWG returned to normalcy in game three. With Nuguri’s Lulu (3/1/9) shielding and buffing Kim “Canyon” Geon-bu’s Graves (6/2/5) and Ghost’s Ashe (8/2/7) in fights, DWG dominated the mid game skirmishes. Targeting Mikyx’s Pantheon (3/9/4) repeatedly, DWG took back control of the series with a 22 kill to 10 win in 31 minutes.

Now on match point, DWG did everything in their power to humiliate G2 in game four. Flashing emotes of FunPlus Phoenix throughout, DWG dominated G2 to send them home. Heo “ShowMaker” Su, the DWG player most vocal about his impending revenge, picked up a solo kill on Caps for First Blood to set the tone. DWG never slowed down, winning every early skirmish to set up for a Rift Herald take at 15 minutes. When the Herald was dropped, DWG used it to steamroll G2’s base. G2’s mid inhibitor fell at 18 minutes, followed quickly by the Nexus at 19 minutes. DWG’s 15 kill to 2 win over G2 in game four was the fastest game in Worlds history. DWG added insult to injury by taking G2’s victory celebration after the match was over.

Critics noted that DAMWON had yet to play a best-of-five against any team but DRX so far in 2020, so it was hard to judge their strength heading into this series. With a statement win over a team that had title aspirations, DWG have now proven their talent. The consistent play of Ghost has brought DWG to a level that we hadn’t seen in 2019 or early 2020, giving DWG a real threat in every role. In the covid world of 2020, the scrim gods have taken center stage.

While there was plenty of excitement for the matchup between DAMWON and G2 Esports on one side of the bracket, there was less on the other side. For starters, Top Esports and Suning both play in the LPL, meaning there was no regional pride on the line. Further, we had already seen this matchup play out in the Summer playoffs, and it was no contest. Top Esports swept Suning 3-0 in the semifinals en route to winning the Summer Split, solidifying themselves as the top contenders for the Worlds title. Why should this semifinals be any different?

As it turns out, Suning had improved since the end of the Summer season. They proved that immediately by taking down TOP in game one. Chen “Bin” Ze-Bin’s Wukong (5/1/5) led the way, taking the most kills and leading Suning in damage dealt (12.8k). Suning led game one 11 kills to 7 when they ended in under 30 minutes.

Again, just like the previous series, the winner of game one would bounce back to win game three. This was a much scrappier game from the outset, with five kills being exchanged in the first four minutes of play. Suning picked up four of those kills, staking them to a nearly 2k gold lead by five minutes. Suning never looked back, building their lead by taking turrets and an Ocean Soul with four ocean drakes. With so much regen in their pocket, Suning outlasted TES in every late fight, eventually winning 13 kills to 7 in 40 minutes.

The LPL 3RD SEED HAVE DONE IT, SN ARE THROUGH TO THE FINAL! #SNWin #Worlds2020 pic.twitter.com/gwYo2ocpP4

With the match on the line in game four, we were treated to the first real LPL bloodbath of the semifinals. Another four kills were exchanged in the first four minutes, but this time the fighting continued throughout. With TES on the verge of picking up Cloud Soul at 22 minutes, Suning had other ideas. Angel’s Akali (8/1/8) picked up a triple kill as Suning aced TES to deny the Soul and extend their gold lead. Six minutes later, Suning once again fended off TES with a four-kill-to-one fight win, basically solidifying that TES could not defeat Suning in a team fight. With two Barons going giving them pushing power, Suning finished off TES 21 kills to 18 in 42 minutes to advance to the Finals.

Previously labeled as scrim gods, much like DAMWON Gaming, Suning have now proven they can put it all together on the big stage. Playing against incredible individual players on TES, Suning were in no way outmatched themselves. Bin outperformed 369 in top lane, while Tang “huanfeng” Huan-Feng showed much more poise as a rookie than World Champion Yu “JackeyLove” Wen-Bo. Hu “SwordArt” Shuo-Chieh was the better support, Lê “SofM” Quang Duy looked the equal of Hung “Karsa” Hao-Hsuan, and even Angel stood his ground against the World’s best mid laner. DAMWON will be a tough test, but Suning have already proven they can beat one tournament favorite.

Heading into the tournament as the first seeds from their respective regions, both G2 Esports and Top Esports were expected to compete for the title. Both made runs deep enough to not be considered a disappointment, but both fell short of the ultimate goal.

For G2 Esports, the end of their run is less surprising. While they made it to the Finals last year by beating DAMWON, there was no mistaking this DWG team for last year’s version. DWG proved to be more solid with Ghost in the lineup and took the step forward of winning the LCK, proving they were more than scrim gods. Like FunPlus Phoenix before them, DWG were just better than G2 Esports. They created advantages in lane, used them to win skirmishes, and were methodical in their closeouts.

On the other hand, Top Esports were expected to dispatch Suning, if not with relative ease. Not only did TES sweep them in the LPL Summer semifinals, TES swept Suning 2-0 in their only matchup in the regular season. TES were supposed to be the collection of the strongest individual players in the whole tournament field, but Suning got the better of them in the early games in both games three and four. Once behind, TES are a much more beatable team that never quite knew how to steady a sinking ship.

Though it was a disappointing end to the season for TES, their immediate prospects for 2021 remain bright. All five of their starters remain under contract, with only Zhang “QiuQiu” Ming expiring at the end of November. Considering support is their weakest role and Liang “yuyanjia” Jia-Yuan supplanted him, QiuQiu will need to move on if he wants to find a starting role in 2021. TES themselves could be looking to upgrade that spot themselves, as yuyanjia was often just along for the ride, rather than a real contributor to the team.

G2 Esports are in a similar spot, as all five of their starters are under contract through 2022. That doesn’t, however, mean that the roster will stay intact. With two runs under the same roster falling short, the organization might want to try something to shake the team up, especially after a very rocky start to the Summer Split. Some of their players may also want a break after falling short on another deep run.

All of their players will be in top demand, so G2 would be able to get a hefty price in return for any of them wanting to move on. Their recent success and positive culture in the organization should also be attractive for any top players, so they could certainly make a run at any Western player who is most interested in winning. That is, after all, how they got Caps in the first place. Unless the roster is completely blown up, expect G2 to remain a top contender in 2021. Even if the roster is blown up, probably still expect G2 to remain a top contender in 2021.

The 2020 World Championships field has been narrowed down to the final two teams. Korean representative DAMWON Gaming will take on Chinese representative Suning on Saturday, October 31st at 3 a.m. PST. The winner of the best-of-five will become the 10th World Champion.