Worlds Quarterfinals: DAMWON Get Their Rematch with G2 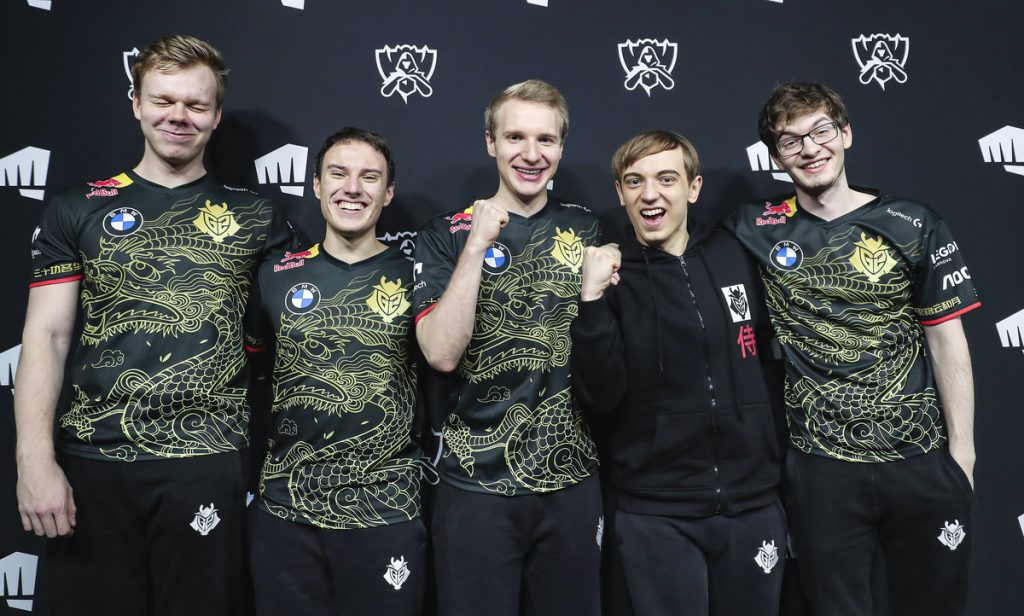 G2 Esports are the West’s last hope after a 3-0 sweep of Gen.G in the quarterfinals. (Photo courtesy David Lee - Riot Games)

The quarterfinals of the 2020 World Championships has concluded. DAMWON Gaming will get their rematch with G2 Esports after both teams took down 3-0 sweeps. Meanwhile, there will be an all-LPL match on the other side after Suning and Top Esports won their best-of-fives. We take a look at the top storylines of the World Championship so far.

DAMWON GET THEIR REMATCH WITH G2 ESPORTS

DAMWON Gaming were the scrims gods of 2019. Though they finished third in the 2019 Summer playoffs and had to qualify as Korea’s third seed in the Regional Finals, they were one of the most feared opponents in the tournament. After dominating the Play-In Stage, DWG topped Group D by going 5-1, beating out 2018 champion Invictus Gaming for first in the group. At that point, DWG looked like one of the tournament favorites.

That scrim performance, noted to have occurred against G2 leading up to the tournament, did not translate in the quarterfinals. G2 Esports took care of DAMWON Gaming 3-1, sending DWG to an earlier than expected exit. G2 would go on to make the Finals, eventually losing 3-0 to FunPlus Phoenix.

DAMWON Gaming have since spoken of revenge. They will get their chance after both DWG and G2 took dominant 3-0 sweeps to advance to the semifinals.

DAMWON Gaming opened the quarterfinals matches against DRX. Full of confidence after sweeping DRX in the 2020 LCK Summer Finals, DWG did the same thing again at Worlds. The games may not have necessarily been quick or high in kills, but DWG were in control throughout. They started with a nine kill to three win in 38 minutes in the opener. DRX fought back to take a small gold lead in the middle of game two, but DWG’s four-for-one teamfight at 26 minutes gave them back control. They set up match point with a 12 kill to 7 win in 36 minutes. DWG didn’t mess around with the closeout, winning 21 kills to 7 in only 25 minutes to sweep the series.

In typical G2 fashion, even their sweeps were full of up and downs. Playing the LCK’s third seed in Gen.G, G2 opened with a big 19 kill to 4 win in game one. G2 then hopped on the back of Rasmus “Caps” Winther to beat Gen.G in game two. His Sylas was unkillable, destroying Gen.G in skirmishes while somehow staying alive. He finished 11/0/11 in the 28 kill to 11 win in 29 minutes. G2 then withstood a messy teamfight loss and Baron giveaway to Gen.G to still take Infernal Soul and beat Gen.G in the late game. Marcin “Jankos” Jankowski’s Graves ran circles around Kim “Clid” Tae-min’s Kindred, going 7/2/10 in the 23 kill to 14 win in 32 minutes.

With such dominant performances in the quarterfinals, it’s tough to give an advantage to either DAMWON or G2 heading into their series. DWG performed better in the group stage, but G2 may have had the tougher competition. Group A’s top seed Suning beat Group B’s second seed JD Gaming.

G2’s top laner Martin “Wunder” Hansen doesn’t seem concerned with the matchup. Told that DWG jungler Kim “Canyon” Geon-bu believes DWG have a better chance this year, Wunder said: “Honestly, I haven’t put much thought into playing against DAMWON, because, in my opinion, we should just focus on ourselves for this week. Then it depends on if Suning or TOP wins. Then we’ll start preparing for either of those teams. I don’t think DAMWON is really a threat to us. We usually beat all the Korean teams anyway, so that’s my take on it.” Game on.

TOP ESPORTS TO FACE SUNING IN OTHER SEMIFINAL MATCH

There may not be a great Worlds rematch on the other half of the bracket, but we do get an all-domestic series as LPL teams Top Esports and Suning face off. Their matchup guarantees there will once again be a Chinese team in the Worlds Finals.

Suning finished atop Group A after beating G2 Esports in the tiebreaker, but they were still underdogs in the quarterfinals. That’s only because JD Gaming were one of the strongest second seeds to ever advance from groups. The LPL’s second seed got a tough draw against DAMWON Gaming in their group, considering they were ineligible to be drawn into a group against TOP Esports. JDG lost both of those matchups, but beat PSG Talon and Rogue twice each to finish 4-2.

JD Gaming took First Blood as expected, winning the opener 20 kills to 13 in 38 minutes. However, the momentum of the series quickly shifted in game two. Led by Tang “huanfeng” Huan-Feng’s 9/0/12 Jhin, Suning pulled off a quick 26 kill to 8 win in only 26 minutes. The series flipped from there, as Suning ripped off two more wins to stun JD Gaming. Suning won game two 17 kills to 7 in 32 minutes, before closing it out with a 13 kills to 7 win in game four. Huanfeng earned game MVP in game four, going 7/1/5 on Jhin.

TOP Esports were then expected to cruise by Fnatic, but they did anything but. Fnatic targeted Yu “JackeyLove” Wen-Bo from the jump, holding him down to a 0/6/2 performance in the game one Fnatic upset. Martin “Rekkles” Larsson was the main beneficiary, going 6/0/8 on Senna in the 15 kills to 5 win. Fnatic continued to punish TOP’s bot lane in game two, this time focusing on Liang “yuyanjia” Jia-Yuan. The TOP support finished 1/7/1 on Tahm Kench, opening the door for a possible Fnatic sweep of the tournament favorites. Stepping up on the international stage, Zdravets “Hylissang” Iliev Galabov earned game MVPs in Fnatic’s first two wins.

What a series!
We made history in Worlds to ever reverse sweep the opponent and advanced to Semifinals for the first time
Thank you fans, we can’t go this far without your support❤️

Also great respect to @FNATIC , such a close one, GGWP pic.twitter.com/YsyBRpkMJs

With their backs against the wall, TOP showed why they were tournament favorites heading in. They started their comeback with a dominant game three, winning 16 kills to 6 in 30 minutes. Fnatic then had a chance to close it out in game four, but TOP took advantage of a teamfight win while down in gold to pull it back, winning 18 kills to 13 in 27 minutes. Now with all the momentum, TOP wasted little time pulling off the first reverse sweep in Worlds history. They won 13 kills to 4 in only 25 minutes. Hung “Karsa” Hao-Hsuan was TOP’s MVP of the series, going 17/2/22 in TOP’s three wins.

Speaking of Karsa, TOP’s win sets up a showdown between him and a former Flash Wolves teammate. He and Suning support Hu “SwordArt” Shuo-Chieh played together on FW from 2015 to 2017, becoming two of the greatest players in LMS history. Now, after years of failing to make a deep run, one of the two will get a chance to play in the Worlds Finals.

FNATIC ALMOST PULL OFF THE UPSET

Fnatic pushed all the right buttons in their first two games against Top Esports. Rekkles and Hylissang dominated bot lane, picking up duo kills in lane. Selfmade joined them when needed, first to counter Karsa’s own attempts and then to extend the lead Fnatic’s duo had already created for themselves. Instead of being excited to stay relatively even with the tournament favorites, Fnatic kept their foot on the gas. They looked every bit the equal of TES in terms of aggressively seeking out skirmishes.

After Fnatic took those two opening wins, LEC host Eefje “Sjokz” Depoortere set the scene with a monologue. Focusing on Rekkles’ legacy and Fnatic’s potential upset over TOP, Sjokz got the Western audience hyped on the idea that Fnatic could pull off the monumental upset.

As we know, Fnatic could not close it out. A suspect game three draft gave way to a blown teamfight in game four. With a final chance at the upset, Fnatic could not get it down. Karsa’s early gank on Tim “Nemesis” Lipovšek’s Twisted Fate paid off after Nemesis greeded his flash, setting up Zhuo “knight” Ding to carry.

We taught you how to hope.

We fought with what we know.

We bow out. But we leave as Fnatic.

Our eighth Worlds ends. But our voice is louder than ever.

Thank you all for taking us this far. Never allow them to make you quiet.

With the loss, Fnatic surely have mixed emotions reflecting on the series. On the one hand, they went toe-to-toe with the pre-tournament favorites, putting them on the ropes after winning the first two games. However, their inability to close the series out has to leave them wondering what could have been. The tournament format would have set up favorably for them, as Fnatic would have avoided both G2 Esports and DAMWON Gaming.

Fnatic must now decide how to address their roster going forward. Rekkles and Hylissang are their only contracts set to expire. It would be a massive shock if Rekkles went anywhere, as he is expected to be with Fnatic for life. Hylissang had a difficult domestic season, but he was one of Fnatic’s best players in this series. His biggest problem may be more related to not being on the same page with his teammates on his engages, rather than declining skill.

Though he remains under contract through 2021, Nemesis is the most likely candidate to move in the off-season. Nemesis had been one of the most consistent mids for Fnatic in 2019, but he struggled much more in 2020. While he’s most comfortable playing a passive farming style, he roamed a lot more often for Fnatic at Worlds. Still, Fnatic may want someone who is more comfortable playing a more aggressive role.

Worlds action will continue on with the semifinals. G2 Esports will take on DAMWON Gaming for the first Finals spot on Saturday, October 24th at 3 a.m. PST. Top Esports will then take on Suning at the same time on Sunday, October 25th.